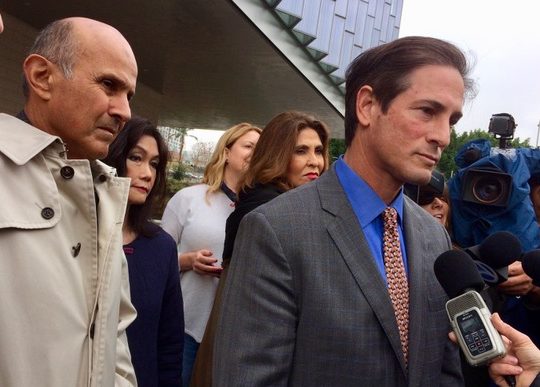 WITH BACA’S TRIAL A MONTH AWAY, WE HAVE DUELING MOTIONS

Dueling motions make up the latest round of legal volleys in the ongoing matter of the trial—or more accurately trials—of former Los Angeles County sheriff Lee Baca. Specifically, the defense team has filed a motion stating that, in retrying their client for obstruction of justice, the U.S. Government is illegally exposing him to double jeopardy.

Meanwhile, the government’s prosecutors have filed their own motion which asks US District Court Judge Percy Anderson to prevent the former sheriff from wearing a small six-pointed sheriff’s star on his lapel, as he has done for every court appearance since this legal woes began last February. At first glance, the matter of the pin seems like a petty issue, but the prosecution assuredly doesn’t think so. (More on that in a minute.)

Along with the mini-badge issue, the prosecution wants Judge Anderson to rule that Baca’s attorneys may not engage in what is known as the “good acts” defense, in which they call and question witnesses, or cross examine the prosecution’s witnesses, about “good” deeds the former sheriff may have done, or good orders he may have given, that demonstrate for a jury his concern about the state of the county’s jails, but do not directly relate to the actions that are the foundation of the obstruction of justice charges, and the time period in which those actions took place.

To remind everyone again of the back story: Barring anything unforeseen, Baca and his legal team will be back in the courtroom on February 21 for opening statements in the new trial in which the former sheriff will be tried for obstruction of justice and conspiracy to obstruct justice, for his alleged part in a strategy to deliberately derail a federal investigation into corruption and brutality in the Los Angeles County jail system.

Next month, Lee Baca will also face a third charge of lying to federal officials about his alleged involvement in the obstructive actions that have thus far resulted in eight former department members being sentenced to prison, with a ninth permitted to plead to a lessor charge of perjury, in return for his cooperation with government prosecutors.

As most readers know, Baca was already tried this past December for the two obstruction charges. But the December trial resulted in an 11-1 hung jury, with 11 jurors voting to acquit the former sheriff, and only one holdout favoring a guilty verdict. As a consequence of the jury’s stated inability to break its deadlock, U.S. District Court Judge Percy Anderson, declared a mistrial.

After the 11 to 1 stalemate, many department watchers figured the government would not retry Baca. But, with the backing of U.S. Attorney Eileen Decker, the prosecution team did elect to go for round two on the obstruction charges, along with trying the former sheriff for allegedly lying to the feds.

As mentioned above, now that the run-up to the new trial has begun, each side of the legal battle has begun filing some intriguing motions.

DOUBLE JEOPARDY AND THE “SHOTGUN” VERDICTS

The motion filed by lead defense attorney Nathan Hochman, along with co-counsels Tinos Diamantatos and Brianna Abrams, is an interesting move, and one that according to legal experts we’ve polled, it is highly unusual.

The basics of what the defense asserts is that unless the court—namely Judge Anderson—properly found “manifest necessity” to declare a mistrial after the jury declared itself hopelessly deadlocked, that double jeopardy applies, and thus prevents a second trial on the two counts of obstruction of justice, and furthermore “mandates their dismissal.”

According to Hochman and company, Anderson’s order of a mistrial was not supported by “manifest necessity” to the proper “high degree” required, because Anderson failed to engage in four specific actions that would have better determined whether the jury was genuinely deadlocked, or could have become unstuck if Anderson had shoved them a little more. The four actions that the defense contends Anderson wrongly omitted are as follows:

1. He didn’t apply the Allen charge.

This is the main part of the defense’s theory.

The Allen charge (for those who are not attorneys, or have not been recently rabbit holing on such matters) is based on an 1896 Supreme Court ruling in the case Allen v. the United Sates of America, in which SCOTUS upheld the right of a judge to issue a jury instruction intended to prevent a hung jury by strongly encouraging jurors in the minority to reconsider.

Such an instruction became known as an Allen charge (or in a slightly tweaked version, the modified Allen charge). It is given when, after deliberation, a jury reports that it is deadlocked and unable to come to a unanimous verdict. Because it is a strong verbal shove used to dislodge jurors from entrenched positions, the Allen charge is sometimes referred to as the “dynamite charge” or the ” the “shotgun instruction.”

To be clear, judges are not required to use the Allen charge. But Baca’s attorneys contend that, in this case that the court should have pulled the pin, so to speak. (It is mostly used in federal cases as at least 23 states have rejected it for use in state proceedings.)

2. He didn’t re-read to the jury the “reasonable doubt” instruction. Anderson should have done so, the defense wrote, because “re-reading a portion of the jury instructions is well within the trial court’s available remedies for jury or obstinacy.”

Here’s what Anderson did do instead. After the foreperson had confirmed that, in his opinion, the jury was “unable to reach a verdict as to one or more counts,” the judge asked the jury panel as a whole to raise their hands if anyone disagreed with the foreperson. No hands were raised.

No hands went up.

At that point, after a sidebar with the prosecution, the defense, and (weirdly) the defendant, Anderson declared a mistrial.

The defense contends that Anderson should have pushed the jury harder to make sure there was no one who believed that they chould keep deliberating productively.

4. Anderson should have asked the jury “whether it was deadlocked as to both counts. ” Since Anderson did, in fact, ask the foreperson if the jury was deadlocked on a verdict “as to one or more counts,” this last seems like a bit of hair-splitting. But appellate justices may think otherwise.

Obviously, it is extremely unlikely that federal judge Anderson is going to agree with the defense that he, Percy Anderson, screwed up and should not have declared a mistrial when he did. So, we can pretty much assume this motion is aimed at hoped for future appearances before appellate panels. (We’re looking at you, Ninth Circuit.)

On the day the defense filed its double jeopardy motion, the prosecution team, made up of lead prosecutor Assistant U.S. Attorney Brandon Fox, along with Assistant U.S. Attorneys Lizabeth Rhodes, and Eddie Jauregui, filed a motion to force Baca to stop wearing his sheriff’s star lapel pin, which is about the size of a quarter. Along with the request that Anderson legally yank the mini-star off the former sheriff’s lapel, the prosecution wants the defense to be prevented from using other strategies not directly related to the charges at hand to shore up Baca’s good guy image.

Throughout his initial trial, wrote the prosecution, defendant Baca “attempted to portray himself as a law-abiding reformer” using “impermissible means.”

According to the government, the former sheriff “essentially testified” without ever taking the witness stand or “being subjected to cross examination.” He did so, they wrote, by wearing that shiny little pin shaped like a smaller version of the Los Angeles County Sheriff’s star each day of trial. “In doing so,” the government wrote, Baca “attempted to cloak himself with the credibility, authority and support of the Sheriff’s Department,” despite stepping down from that position some years ago—and despite leaving under the cloud of growing criticism and scandal.

“The potential prejudice [of the pin],” wrote the government, “was exacerbated by defendant calling a witness wearing the same pin to testify about defendant’s law-abiding character, and by his supporters wearing similar pins while seated in the gallery….”

The star, the prosecution maintained, supported defense attorney Hochman’s “messaging throughout trial” that Baca was honorable and law-abiding and represented the ‘core values’ of the Sheriff’s Department, and that this case was simply a “clash” between the FBI and the LASD “instead of being about the obstruction of a federal grand jury investigation into civil rights abuse.”

The second part of the government’s motion pertains to what they describe as the defense’s use of a “prior good works” strategy, which portrayed the former sheriff as a reformer whose actions suggested he could not possibly have criminally interfered with the federal investigation in question.

Fox and company noted that Baca “spent a majority of his case and much of his cross-examination” on issues designed to foster the reformer image, such as presenting evidence that Baca
“had an associate” (namely former department member Paul Pietrantoni) teach “’wrestling
moves’ to deputies in 2009 and 2010” in order to reduce force in the jails. In addition, Hochman asserted that Baca “implemented an Office of Independent Review more than a decade before the federal investigation,” to help investigate any deputy wrongdoing. The defense also brought out in testimony, Baca’s pet program, Education Based Incarceration, and so on.

(Actually, the LA County Board of Supervisors, not the sheriff, ordered the formation of the OIR in 2001 to provide citizen oversight, but the jurors never knew that.)

The government asks that, during round two, all this kind of testimony and evidence should properly be prohibited.

For its part, the prosecution stated that it will no longer call certain witnesses from the last trial such as the So Cal ACLU’s Peter Eliasberg, jail chaplain, Paulino Juarez- Ramirez, or former LASD Commander, Robert Olmsted, all of whom testified that Baca was aware of the abuse going on in his jail system, but ignored it. Yet those same witnesses unwittingly opened the door to the defense’s claims in cross examination that Baca was entirely proactive whenever problems in the jails surfaced. Post-mistrial interviews with jury members made clear that the “good works” theme had a strong influence on the jurors’ conclusions.

In the coming days and weeks the prosecution and the defense will reply to each other’s motions, plus any additional motions, and eventually Anderson will rule.