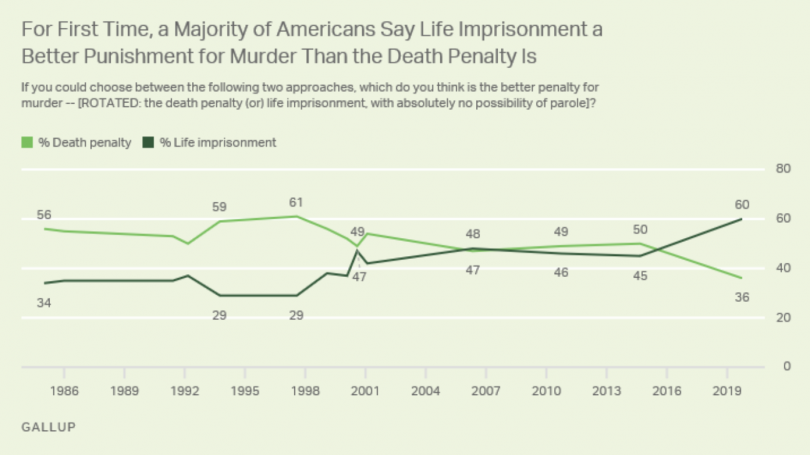 Newly released results from a Gallup poll revealed that 60 percent of Americans agreed that life-in-prison-without-parole (LWOP) was a better punishment than the death penalty for people who commit murder.

The Oct. 14-31 survey of a random sample of 1,506 people marked the first time in 34 years of Gallup polling the question that a majority of respondents chose LWOP over capital punishment as their preferred method of punishment for homicide.

It’s worth noting that when answers to the capital-punishment-or-LWOP preference question were broken down by political party, Republicans still favored the death penalty over LWOP — 58 percent to 38 percent. Still, that gap has shrunk considerably over the last five years. In 2014, 68 percent of Republicans preferred capital punishment, while 29 percent chose life imprisonment. 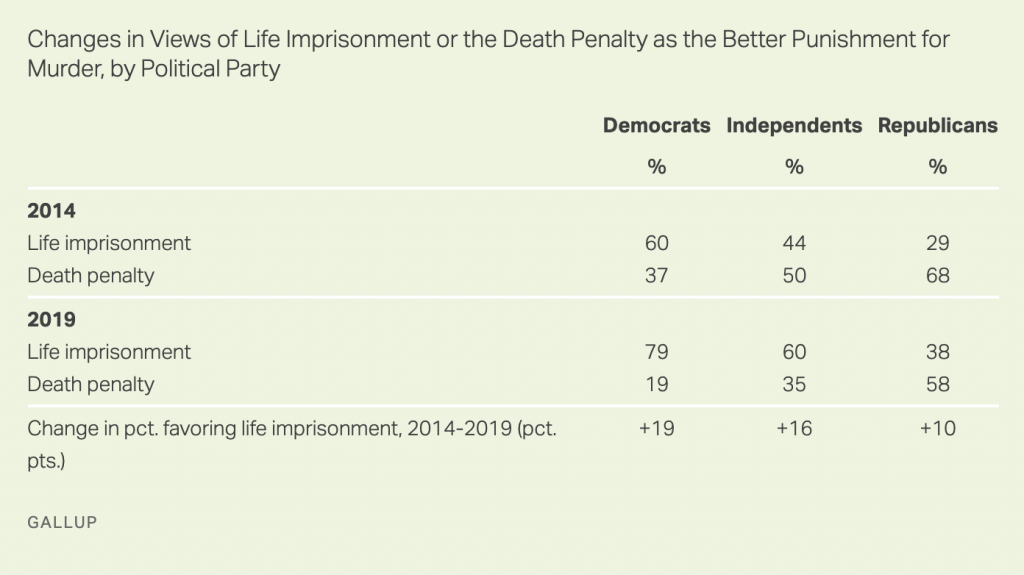 Democrats and liberals, people of color, young adults between the ages of 18 and 29, women, and people with college degrees were most strongly in favor of punishing people who murder by imprisoning them for life, rather than executing them.

The new national inclination toward LWOP over execution doesn’t mean that a majority of survey responders think the death penalty should go away entirely, however.

In a related death penalty poll sampling over 1,500 people and conducted on Oct. 1-13, 56 percent of those surveyed agreed that they were “in favor” of the death penalty. This question didn’t offer the alternative of LWOP.

In surveys conducted between 1976 and 2016, at least 60 percent of Americans said they supported the death penalty, according to Gallup. The rate peaked at 80 percent in 1994, during the height of the tough-on-crime era of policing and criminal justice, and the year that Congress passed the controversial federal crime bill.

The same week the Gallup poll results arrived, a federal judge gave temporary reprieve to four federal prisoners scheduled for lethal injection in December and January, after the Trump Administration had announced that executions would resume — with haste — after a nearly two-decade pause.

These men argued that the federal government’s plan to kill them with one dose each of pentobarbital sodium — a protocol not authorized within the Federal Death Penalty Act — was unconstitutional. US District Judge Tanya Chutkan agreed.

The Federal Death Penalty Act requires the U.S. government to “carry out executions in the manner prescribed by the states” in which prisoners are convicted.

“The public interest is not served by executing individuals before they have had the opportunity to avail themselves of legitimate procedures to challenge the legality of their executions,” the judge wrote in her opinion. “Because the public is not served by short-circuiting legitimate judicial process, and is greatly served by attempting to ensure that the most serious punishment is imposed lawfully, this court finds that it is in the public interest to issue a preliminary injunction.”

In a separate October decision, this time by the Ninth Circuit Court of Appeals, a fifth death row prisoner, Lezmond Mitchell, was spared from an execution scheduled for December. Mitchell was sentenced to death despite protests from family members of the victims, Alyce Slim and her 9-year-old granddaughter, a federal prosecutor, and Navajo Nation officials, who argued that “the taking of human life for vengeance” goes against Navajo beliefs.

At the beginning of November, a group of 65 former judges and other families of murder victims signed a letter to President Trump and AG Barr, calling on them to reverse their decision to resume executions. “We are chilled by the prospect that people will be killed in the name of our federal government despite serious questions about the fairness and reliability of the system that condemned them,” the letter read. Moreover, federally sanctioned killing would not improve public safety, only intensify “the trauma of losing a loved one.”

In May, in California, home to the nation’s largest death row, Governor Gavin Newsom initiated a moratorium on executing prisoners sentenced to death.

And human errors do occur. Since 1981, five people on California’s death row – all men of color – have been exonerated after spending between 5 and 25 years in prison. More than 165 wrongfully convicted people have been freed from death rows in states across the nation.

Despite the moratorium, some prosecutors, including LA County District Attorney Jackie Lacey have continued to seek the death penalty.

Between 2014 and 2018, LA, neighboring Riverside, and Maricopa, Arizona were the only three counties in the nation that sentenced more than 10 people to death. And 31 percent of California’s more than 700 prisoners on death row were sentenced to die in Los Angeles.

And LA’s cases have been plagued by alarmingly “inadequate defense counsel,” according to the ACLU.

On Thursday, a group of local religious leaders delivered a letter to DA Lacey, urging her to stop pursuing death sentences.

“There is evidence,” the leaders wrote, “that the death penalty prolongs the suffering of many murder victims’ families, since capital cases involve years of legal uncertainty, hearings, and frequent media headlines that can reopen old wounds. Victims’ families spend years, and often decades, waiting for an execution that may never come.”

The LA County District Attorney’s Office’s “excessive use” of capital punishment “reflects a belief that we cannot accept – that certain offenders are beyond redemption,” the group continued. “No matter what someone did, they remain God’s creation and have intrinsic value. When holding offenders accountable, our justice system cannot lose sight of the dignity of every individual.”

More than 100 faith leaders from more than a dozen denominations signed the letter, including Father Gregory Boyle of Homeboy Industries, Rector Mike Kinman from All Saints Church in Pasadena, Bishop John Harvey Taylor of the Episcopal Diocese of LA, and Pastor William Smart from the Southern Christian Leadership Conference.

This latest push follows a similar effort made by a group of 75 law professors and scholars this summer.

In response to that first letter, Lacey said that she would “continue to follow the law as prescribed by the people of California – whether that is seeking the death penalty for the most heinous crimes or, if the death penalty is abolished, life in prison without the possibility of parole.”