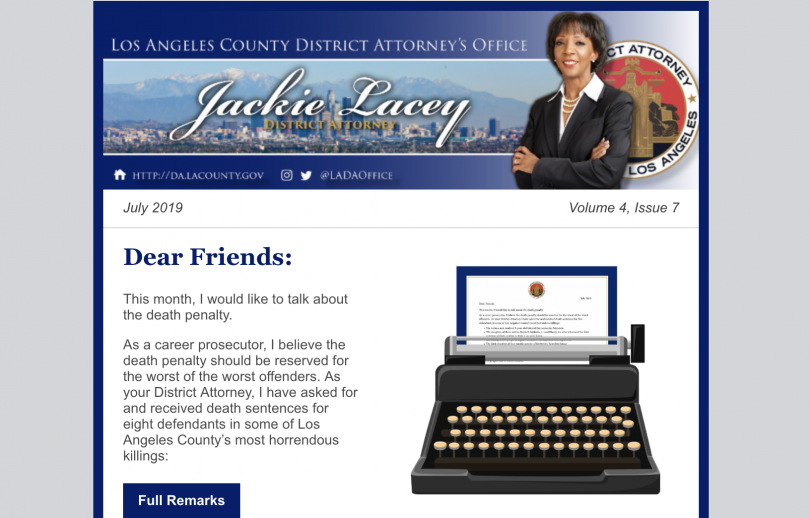 On Wednesday, a group of more than 75 law professors and other legal experts issued an open letter urging Los Angeles District Attorney Jackie Lacey to put a stop to the death penalty system in LA.

DA Lacey “seeks the death penalty with an enthusiasm and consistency unmatched by many of her counterparts across the country,” the letter said. “The nexus of capital punishment in this country resides not in Texas, Georgia, or Oklahoma, but in Los Angeles County, California.”

LA County has, in fact, been responsible for more death sentences per capita than any other large county in Georgia, North Carolina, Pennsylvania, Texas, Utah, or Washington, over the last five years, according to an ACLU white paper released last month. Nearly one-third of California’s more than 700 prisoners on death row were sentenced to die in LA County. And between 2014 and 2018, Los Angeles, neighboring Riverside, and Maricopa, Arizona were the only three counties in the nation that sentenced more than 10 people to death during that time.

While Lacey has championed mental health diversion since her 2012 election, lately she has faced a growing chorus of accusations that she has not held law enforcement officers accountable for alleged excessive–fatal– uses of force, and is not the criminal justice reformer that many hoped to elect. (Lacey may soon face a challenge for her position from San Francisco District Attorney George Gascón, who is arguably one of the most reform-focused district attorneys of any large jurisdiction in California.)

Across the nation, Wednesday’s open letter stated, “we execute not the worst of the worst, as the Supreme Court has mandated, but society’s most vulnerable and least lucky”–people with severe intellectual disabilities, mental illnesses, histories of “unspeakable sexual or physical abuse,” or a combination of these circumstances.

Moreover, legal defense is often “ineffective”–and even “deplorable”–in capital cases, according to the professors and scholars. “In trial after trial, lawyers fail to provide effective representation for their clients,” the letter said. “They conduct no investigation into the case, spend little time with the client or their family, and often present little to no testimony at trial or during the sentencing phase.” Thus, mental illnesses, low IQs, extreme trauma, and other impairments can go “unacknowledged by counsel and, as a result, unknown by jurors deciding” defendants’ fates.

Even more troubling, is the fact that more than 165 innocent people have been freed from death row since 1973 after being wrongfully convicted. Substandard legal defense is often, at least partially, to blame, along with prosecutorial misconduct, faulty eyewitness testimony, and bad police work.

Out of the 22 people for whom the DA’s Office has procured death sentences since Lacey’s inauguration, five were represented by lawyers who had been suspended or disbarred. “One lawyer is currently under investigation by the state licensing agency, and two of the accused represented themselves, a frequent sign of a person with a defense team ill-equipped to handle mental illness or the seriousness of the work,” according to the legal experts. “Only three men received representation from institutional public defense organizations–offices with specialized training and staff dedicated to capital cases. Luck of the draw should not determine whether a person lives or dies–but in Los Angeles, it does.”

In her July newsletter, Lacey defended her stance on the death penalty.

“Dear Friends,” Lacey wrote, “This month, I would like to talk about the death penalty.”

Capital punishment, Lacey said, “should be reserved for the worst of the worst offenders.”

Among the people whom Lacey’s prosecutors have secured death penalty convictions, is Isauro Aguirre who, along with his girlfriend, Pearl Fernandez, subjected her 8-year-old son, Gabriel Fernandez, to long-term torture, before killing him. Lacey’s letter highlighted seven other LA County-prosecuted death row cases most of which involved horrible, multiple murders.

“These families grieve for their loved ones and look to me for justice,” Lacey said. “They, like every resident of Los Angeles County, expect their prosecutors to follow the law.” And voters have failed to abolish the death penalty twice in recent years, leaving the death penalty an option for prosecutors who continue to seek it. (Despite this, the state has not executed anyone since 2006 because of problems with lethal injection protocols.)

None of the 22 people whom the LA County DA’s Office has sentenced to death since Lacey’s election have been white, critics have also pointed out. Lacey, in her letter, argued that her “prosecutors make decisions based on the facts of the crime – not the race of the defendant or the victim,” adding that both defendants and victims in LA County’s capital cases have been racially diverse.

“We will continue to carefully review these cases,” Lacey said, “and I will follow the law as prescribed by the people of California – whether that is seeking the death penalty for the most heinous crimes or, if the death penalty is abolished, life in prison without the possibility of parole.”

The law professors and scholars say that DA Lacey should follow the lead of Gov. Newsom and several other jurisdictions that have issued moratoriums on capital punishment, which so often reaches a level that is unconstitutionally cruel and unusual.

“A prosecutor’s job, first and foremost, is to seek justice and uphold the constitution,” the letter concluded. “By leading the nation in its use of the death penalty, the District Attorney’s office in Los Angeles violates its solemn oath. We call on the office to end the county’s experiment with the broken machinery of death.”