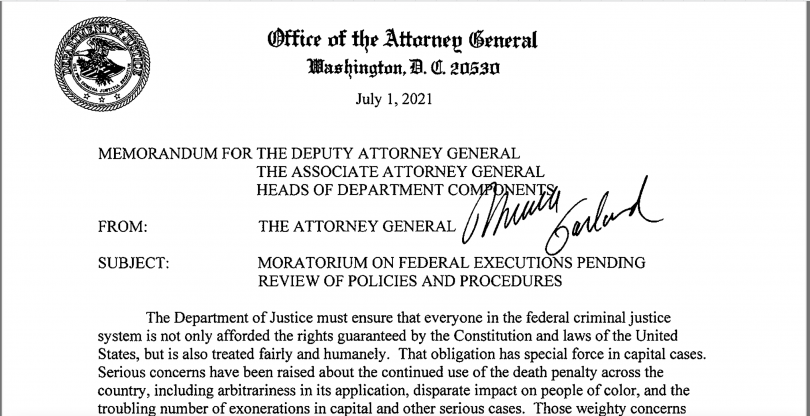 On Thursday, July 1, the U.S. Department of Justice announced that Attorney General Merrick Garland had issued a memorandum imposing a freeze in scheduling any more federal executions, while a review of the DOJ’s policies and procedures on the matter can take place.

“The Department of Justice must ensure that everyone in the federal criminal justice system is not only afforded the rights guaranteed by the Constitution and laws of the United States, but is also treated fairly and humanely,” began the memo that instituted the moratorium.

“That obligation has special force in capital cases. Serious concerns have been raised about the continued use of the death penalty across the country, including arbitrariness in its application, disparate impact on people of color, and the troubling number of exonerations in capital and other serious cases,” Garland continued.

“Those weighty concerns deserve careful study and evaluation by lawmakers. In the meantime, the Department must take care to scrupulously maintain our commitment to fairness and humane treatment in the administration of existing federal laws governing capital sentences.”

In other words, this is no guarantee that executions won’t start up again. It mainly means that the DOJ is going to review all the issues surrounding the federal death penalty, including the actual method for putting people to death.  (Last July, AG William Barr changed over to the very controversial method of using a single drug, pentobarbital, for executions.)

In any case, while the review takes place, nobody’s going to be scheduled to die.

Furthermore, President Joe Biden is personally opposed capital punishment. During his campaign, Biden said he would pass legislation to end the federal death penalty for good. Whether that’s a promise that can realistically be kept given the present composition of the U.S. Senate, is another matter altogether.

Prior to Biden’s inauguration and the nomination of Garland as the leader of the DOJ, the death penalty issue had already developed new urgency during the summer of 2020 when former president Donald J. Trump was suddenly in a rush execute 12 men and one woman before his term in office ran out the clock.

His list of death row inmates to be put to death included controversial cases that prompted attorneys and others who still support capital punishment to speak out for clemency.

As WitnessLA wrote last year while Trump was in the midst of his capital punishment binge, before the former president’s killing spree, the U.S. Government had not executed anybody at all since 2003.

Going back still farther, the federal death penalty was declared unconstitutional in 1972 following the decision of Furman v. Georgia, in which the U.S. Supreme Court found that the death penalty violated the Eighth Amendment’s ban on cruel and unusual punishment, and the Due Process Clause of the Fourteenth Amendment to the U.S. Constitution, adding that it was applied in a manner that disproportionately harmed minorities and the poor.

In 1988, however, as the mood in the country shifted toward what would become a two-decade law-and-order frenzy, capitol punishment was reinstated with the Supreme Court ruling of Gregg v. Georgia. Yet, the reinstatement applied to very few crimes. Then in 1994, the U.S. Congress expanded the number of capital federal offenses to about 50, courtesy of a bill that then-Senator Biden had sponsored.

Last summer all that changed when Donald Trump put the Terre Haute execution chamber back in business, and didn’t let up until mid-January, when — despite an impressive pile of lower court stays, with one particularly well-written stay delivered by a Trump appointed federal judge — the Trump-packed U.S. Supreme Court struck every stay down, and the executions preceded ASAP once they did, often taking place in the wee hours, in order to stay on schedule.

And so it was that the last three of the 13 scheduled executions were accomplished before the January 20, cutoff date, when the new president likely would have put a merciful monkey wrench into the killing of Lisa Montgomery on January 13, Cory Johnson, on January 14, and Dustin Higgs on January 15.

Now, the Attorney General’s memorandum requires the reviews to include consultations with a wide range of stakeholders, including the Bureau of Prisons, the criminal division of the DOJ,  yet also the civil rights division, and non governmental advocacy groups that oppose capitol punishment altogether.