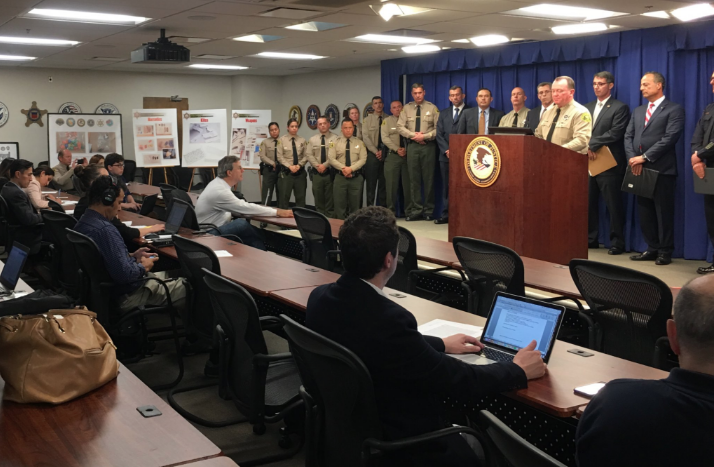 A total of 83 people have been charged in two federal racketeering indictments, according to the U.S. Attorney’s Office. Those charged include Wednesday’s arrestees, as well as 16 fugitives, and 35 defendants already in state or county lockups.

“These cases have delivered a major blow to the Mexican Mafia and leaders of many of the street gangs under the control of the organization,” said United States Attorney Nick Hanna. “By taking out the gang members who control the jails, and by disrupting their communications network, we undermined the Mexican Mafia’s ability to coordinate street gang activity.”

The arrests and indictments are the culmination of an investigation led by the FBI’s San Gabriel Valley Safe Streets Task Force, the members of which include agents and officers from the FBI, Los Angeles Sheriff’s Department, Pomona Police Department, the DEA, and the California Department of Corrections and Rehabilitation.

The defendants are accused of numerous crimes, including conspiracy to violate the Racketeer Influenced and Corrupt Organizations Act (RICO), drug smuggling, extortion, money laundering, and assaults. The indictments lay out how the Mexican Mafia, also known as “La Eme,” came to have power over Latino street gangs, and to wield toxic influence inside LA County’s jails, from which they order assaults on fellow inmates, and individuals on the outside, and run a drug trafficking and extortion operation.

“Operation Dirty Thirds lifts the veil on only one aspect of the complicated factors behind inmate-on-inmate assaults and the dangers to our custody staff,” said Sheriff Jim McDonnell. “Many assaults have been directed, and carried out, by the Mexican Mafia and are documented in this investigation that took more than four years.”

The “Dirty Thirds” name refers to a tax that the La Eme leaders levied on non-Mexican Mafia inmates smuggling contraband into the jails.

“Once narcotics were smuggled into jail facilities at the direction of the Mexican Mafia members and their shot-callers, the narcotics were sold to inmates – and those who possessed other narcotics were not allowed to sell their drugs until the Mexican Mafia member’s drugs were sold,” the U.S. Attorney’s Office said. Once other groups were allowed to bring in contraband, they would have to give one-third to the jail facility’s Mexican Mafia leader. If that leader chose to sell his portion to inmates, the other groups would be again blocked from selling until the leader sold his “thirds.”

The extortion didn’t end there. Defendants are also accused of forcing other Latino inmates to give La Eme a portion of their commissary money from their families. That money would go into a “kitty” that would then be sold to an inmate, creating an additional profit for the Mexican Mafia leader.

The La Eme allegations also include fining and assaulting people associated with the gang who broke the rules, as well as reportedly laundering the money earned through extortion.

“Gang violence in the jails also spills over to the streets and adversely affects our communities,” said Paul Delacourt, the Assistant Director in Charge of the FBI’s Los Angeles Field Office. “This three-year investigation focused on players at all levels for their role in the conspiracy – from the shot-caller, to the secretary, to the dealer, to the smuggler. Today’s successful operation is a direct result of law enforcement partners working cooperatively at all levels of government.”

One of the 32 people arrested was attorney Gabriel Zendejas-Chavez, who is accused of personally ferrying messages from incarcerated La Eme members to state and federal prisons, including ADX Florence, and giving messages about possible snitches and other information to those running the Mexican Mafia’s LA County jail operations.

One of the indictments focuses on a racket allegedly run by Michael “Pomona Mike” Lerma, a 61-year-old inmate, who, according to the indictment “exercised control over, and extorted drug proceeds from, Latino street gangs in and around Pomona, as well as from incarcerated Latinos in Calipatria State Prison in Imperial County.” Lerma’s underlings allegedly conducted robberies, identity theft, fraud, kidnapping, drug trafficking, and violence.

Members of Lerma’s enterprise reportedly tried to steal an LA County jail inmate’s Mercedes. When the man who was watching the car for the inmate refused to give it up, one of Lerma’s man allegedly shot him.

Lerma’s men also reportedly kidnapped a woman, whom they extorted for money over a period of several days. Law enforcement reportedly thwarted the organization’s plan to kill the captive woman.

“The Pomona community certainly suffered from the criminal acts of those indicted,” said Pomona Police Chief Michael Olivieri. “I am very pleased with the success of this long-term investigation, and I am looking forward to more collaboration with our law enforcement partners in future investigations.”