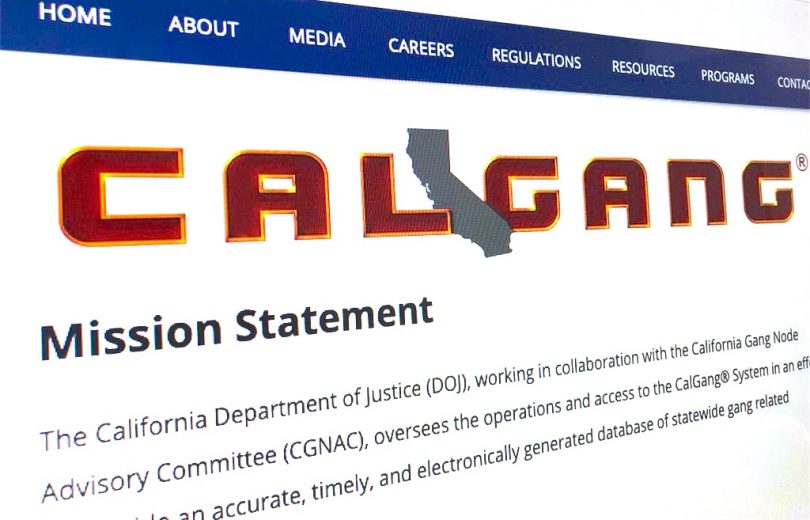 In February, the California Department of Justice initiated a review of the Los Angeles Police Department’s use of the statewide gang database, CalGang, in response to allegations that LAPD officers had been intentionally mislabeling people as gang members in order to improve their stop and search statistics.

The LAPD began investigating the issue itself, early last year, after one LA mother complained that members of the department’s elite Metropolitan Division had falsely identified her son as a gang member. When department officials looked at the officers’ body camera footage, they found alarming discrepancies, and ultimately reversed the young man’s gang label. In looking at other officers’ videos, they found that other officers appeared to have penned inaccurate gang designations onto paper gang field identification cards, as well.

On July 10, the LAPD notified the LA Police Commission that it was “permanently withdrawing from participation in the CalGang database ‘given the extent of the inaccurate information found, including instances of false information.”

In June, the city placed a moratorium on LA police entering anyone into CalGang.

Now, five months later, CA Attorney General Xavier Becerra has announced that, moving forward, the LAPD would be blocked from accessing any part of CalGang, and all other law enforcement agencies across the state will be unable to access any records that the LAPD has entered into CalGang.

The LAPD has put in approximately a quarter of all the 78,000 records currently in the controversial and secretive CalGang database.

The AG’s office also urged all law enforcement agencies to audit their own use of the database to ensure the “integrity of their entries” into the system.

“CalGang is only as good as the data that is put into it,” said Becerra.

“If a quarter of the program’s data is suspect, then the utility of the entire system rightly comes under the microscope. The Legislature tasked DOJ with oversight of the CalGang database and with the development of mechanisms to ensure the system’s integrity. That’s why we’re formally revoking access to the records generated by LAPD. Public safety tools must provide a real benefit to the public and withstand the durability test of constant scrutiny. It should now be obvious to everyone: CalGang must change.”

Additionally, the LA County District Attorney’s Office has charged three members of the elite Metro LAPD division, Braxton Shaw, Michael Coblentz, and Nicolas Martinez with falsifying field interview cards by indicating that civilians verbally admitted to being in gangs, and by making up fake people to label as gang members. The officers’ body camera footage revealed those falsifications. The three face 59 counts between them. More than a dozen others reportedly remain under investigation.

Individuals who admit to law enforcement officers that they are gang members or who have gang-related tattoos are added to the database, but associating with known gang members and wearing clothing that might be gang-related also sends people into the CalGang database.

AG Becerra’s office is currently working on an updated set of criteria under AB 90 a bill passed in 2017 to reform the long-troubled CalGang system. AB 90 will put in place regular audits and other regulations to improve accountability and accuracy for the database, which is shared by law enforcement agencies across the state.

The full criteria for designating someone as a gang member on CalGang is outlined in California’s Street Terrorism Enforcement and Prevention Act (STEP Act), which also created sentence “enhancements” for crimes committed “for the benefit” of a gang. The outcomes can be catastrophic. These enhancements can turn a sentence of a few years into one of multiple decades, and disproportionately affect poor and minority people.

CalGang identification can also lead to inclusion in a gang injunction, affect employment prospects, and lead to deportation.

For kids and adults, achieving removal from the database has also long been a difficult feat.

Back in 2016, State Auditor Elain M. Howle found that CalGang lacked necessary state oversight and did not adequately protect the rights of more than 150,000 people listed in the database. In more than 10 percent of the sample cases Howle’s office examined — entered by the LAPD and three other law enforcement agencies — the departments could not support the inclusion of the individuals based on the database entry criteria.

There were also alarming data errors in the profiles. For example, out of all of the CalGang entries, there were more than 40 profiles for people who were reported as being younger than one year old when entered into the database. Twenty-eight of those infant gang member entries were for people who “admitted to being gang members.”

It was also common in the cases of the LAPD’s entries gang-designated minors and their parents were not properly notified and given a chance to contest an entry into CalGang.