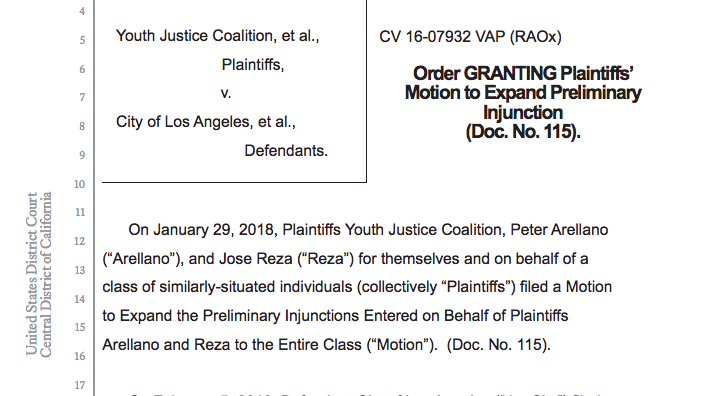 In a 22-page order signed on Thursday, a federal district court judge issued an injunction blocking the enforcement of most of the controversial gang injunctions in the City of Los Angeles.

The ruling represented a significant victory for the ACLU of Southern California, which together with the Urban Peace Institute, and the law firm of Munger, Tolles & Olson LLP, brought a class-action lawsuit on behalf of the Youth Justice Coalition, and two others named as plaintiffs.

Thursday’s federal court ruling put most of the city’s injunctions on hold while the So-Cal ACLU’s lawsuit makes its way through court.

(You can read the original complaint for the 2016 lawsuit here.)

For years, law enforcement has seen gang injunctions as a useful tool in lowering gang activities in crime-fraught communities. But civil rights attorneys have long been concerned about the practice that they said is a clear violation of due process for those listed on the injunctions.

“This ruling sends the city a clear message,” said Melanie Ochoa, ACLU SoCal staff attorney. “It cannot take away the basic liberties of Angelenos on a whim. The city’s use of gang injunctions has violated due process for nearly two decades, with no record of making communities safer. That ends today.”

The decision, said the Youth Justice Coalition’s Kim McGill, “is historic in confirming what communities of color have said for decades. Gang injunctions are prisons without walls. They are overly harsh, serve to cut people off from the opportunities and supports they need to succeed, serve as tools of gentrification and displacement, and criminalize thousands of people for non-criminal acts further enforcing racial and economic discrimination in the implementation of public safety.”

In the ruling, Chief U.S. District Court Judge Virginia Phillips wrote that the plaintiffs and their attorneys had “succeeded in demonstrating a likelihood of success” in demonstrating in the ongoing 2016 class action lawsuit that their due process and First Amendment rights “are being violated…”

Furthermore, wrote Phillips, plaintiffs “have also succeeded in demonstrating a likelihood of irreparable harm” being proved in the same lawsuit.

In simple terms, this means that part of the reason Judge Phillips granted Thursday’s injunction against LA’s gang injunctions was because she concluded that the underlying lawsuit has a “likelihood” of ultimate success.

The ruling has history

She also noted that, in the November 2013 ruling by the Ninth Circuit Court of Appeals regarding Vasquez, the 9th wrote that “[d]etermining whether an individual is an active gang member presents a considerable risk of error.”

In the same ruling, the 9th wrote that, by enforcing a 2009 gang injunction against scores of Orange County residents without giving those residents a meaningful opportunity to contest the allegation that they were, in fact, gang members, D.A. Rackauckas violated the due process provision of the United States Constitution.

In case you’ve forgotten, gang injunctions are civil actions that in essence work like restraining orders. But, instead of regulating the behavior of a single individual (as a restraining order does), it bans certain activities by purported members of a particular gang. Thus if anyone named in the injunction violates any of the restrictions that the injunction lays down, that person can be arrested and go to jail.

The restrictions outlined in an injunction may prohibit those named from entering a defined geographical area referred to as the “Safety Zone,” associating with others who are purported gang members, even if they aren’t named in the injunction, participating in certain activities that are otherwise legal, wearing certain clothing, and, in the case of one of the Orange County injunctions, standing in front of a certain well-known city mural.

Yet, unlike with a criminal charge, because gang injunctions are civil actions, those who want to contest their inclusion are not provided with an attorney if they cannot afford one. So, unless some ACLU attorneys step in, an individual who is wrongly named, or who has, say, been away from any gang involvement for years but is still in a gang database, is just out of luck.

In addition to the Youth Justice Coalition, the other two plaintiffs in the 2016 class action lawsuit are Peter Arellano and Joseph Reza.

Arellano, who was 21 when the suit was filed, was a teenager when he was listed in an Echo Park injunction that was put in place in 2013.

According to the complaint, this was particularly problematic for the young man as Arellano’s father, brother, uncle, cousin, and some of his childhood friends were also reportedly named as gang members. Arellano’s home where he lived with his parents was within the “Safety Zone” of the injunction. This meant that Arellano feared getting arrested even for being seen in his front yard with his brother, or sitting porch with his dad, because such activities fell within the prohibition of associating within “public view.”

According to the complaint, Arellano “skipped neighborhood gatherings, holiday parties, and other social activities out of fear of arrest.” This also meant that Arellano chose “to work far away from the Echo Park neighborhood in order to be as far away from the ‘Safety Zone’ as possible, even though at times it has meant a long and tedious commute.”

When Arellano was served with the injunction, it went into effect immediately and, as had often been the case with other such injunctions, he had no way of fighting his inclusion, according to the complaint.

The second plaintiff, Jose Reza (who was 39 when the complaint was filed in 2016) was reportedly born and raised in the Ramona Gardens housing projects of East Los Angeles, which was within the geographical area referred to as the “Safety Zone” for the Big Hazard gang injunction.

According to the complaint, Reza left Romona Gardens in 1999 and moved to Whittier. Nevertheless, the 2006 “Big Hazard injunction” reportedly has prevented him from picking up his son, who sometimes stays in Ramona Gardens with family members. The injunction also reportedly prevented him from taking union jobs with the Housing Authority of the City of Los Angeles to remodel the housing projects because the jobs were located within the “Safety Zone,” according to the complaint.

Like Arellano, Reza “skipped neighborhood gatherings and social events, and even feared arrest while attending a friend’s funeral.”

And like, Arellano was reportedly “not afforded a hearing to contest his designation by the city as a gang member.”

In the past few years, legal actions on the part of the ACLU have helped precipitate improvements in the use of gang injunctions.

A year earlier, in 2016, the LA City Council unanimously approved a $30 million settlement in a lawsuit accusing the LAPD of enforcing old gang injunction curfews that had been struck down years earlier, in 2007.

“LAPD targeted thousands of Angelenos (mostly of color) and restricted their rights by accusing them of being associated with gangs,” the ACLU of Southern California tweeted on Thursday night. “Our lawsuit seeks to stop this — and we’re making good progress.”