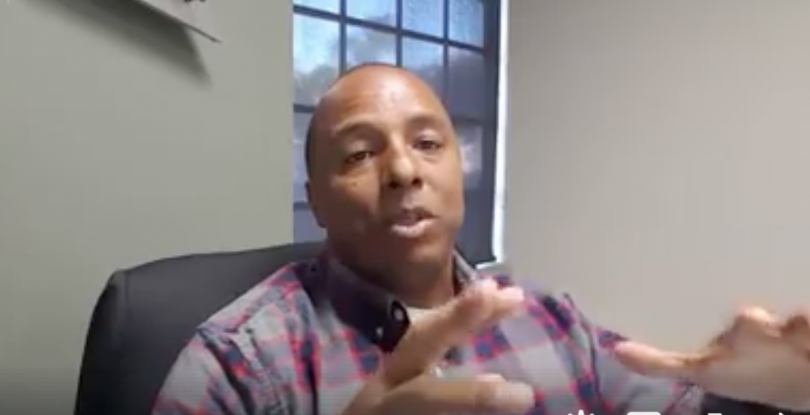 Tuesday morning a team of FBI special agents arrested Los Angeles County Sheriff’s deputy Kenneth Collins and three more suspects after they arrived in Pasadena, allegedly to provide “security” for the transport of nearly 45 pounds of cocaine and more than 13 pounds of methamphetamine.

The arrest of Collins and his “team,” was the culmination of a lengthy undercover investigation by the FBI that began more than six months ago after LA County Sheriff’s officials tipped off the feds that Collins might be up to no good.

This was allegedly the second time that Collins and a varying team of helpers had provided such security. In November of last year, Collins and two of the other men who were arrested on Tuesday, reportedly provided protection the transport of what they were told was six kilograms of methamphetamine, as well as marijuana and counterfeit cigarettes, from the Los Angeles area to Las Vegas.

Also arrested Wednesday along with the 50-year-old sheriff’s deputy were
David Easter, 51, of the Hyde Park District of Los Angeles, Grant Valencia, 34, of Pomona, and Maurice Desi Font, 56, of South Los Angeles. All four have been charged with conspiracy to distribute controlled substances (although Maurice Desi Font was charged slightly later than the first three).

In addition to his alleged double life protecting drug dealers, Deputy Collins, who has been with the sheriff’s department for 15 years, also had another active avocation as a life coach and self-empowerment speaker. He is, for example, one of six featured speakers listed for a  February 10 event called the Girl Power Within Empowerment Conference to be held in Carson, CA. The upcoming conference seemed to be representative of a number of self-help oriented events at which Collins had been a speaker in the past year or so. Collins being interviewed on ESPN radio

He also assigned for a period by LA County Sheriff’s to participate as a facilitator for the Emerging Leaders Academy, a non-profit organization that works with prison parolees and adult probationers, teaching them life skills and leadership techniques. (The organization is sponsored by the Agape International Spiritual Center, Goodwill, and the Los Angeles Urban League. It was also affiliated with the LASD during the time of Collins participation.)*

It was through this program that Collins may have first met one of his alleged co-conspirators, noted the Los Angeles Times.

According to his Facebook page, Collins, who lists that he studied criminal justice ethics at Ashworth College, and human behavior at Morehouse, had expanded his speaking expertise to include relationship advice.  Collins also managed a self-empowerment organization called Clarity Through Education.

“Deputy Collins sold his badge to assist an individual he thought was a drug trafficker,” said United States Attorney Nicola T. Hanna. “This case is part of our long-standing and ongoing commitment to root out corruption, particularly when it involves sworn law enforcement officers.”

(Hanna is new to the job of U.S. Attorney and was appointed to his position on January 3, 2018, by Attorney General Jeff Sessions, and sworn in on January 5.)

Paul Delacourt, the Assistant Director in Charge of the FBI’s Los Angeles Field Office, had equally harsh words for Collins.

“Deputy Collins used his position of trust and appropriated his authority to conduct lucrative criminal activity with others at the expense of Los Angeles County residents,” said Paul Delacourt, the Assistant Director in Charge of the FBI’s Los Angeles Field Office.

Interestingly, it was not the feds, but Deputy Collins’ own department that first discovered something off-kilter was going on, and brought the allegations of misconduct to the attention of the FBI, according to a statement released by the LASD on Wednesday.

“Since that time, the LASD has been directly cooperating with the Department of Justice and Federal Bureau of Investigation during all aspects of the investigation,” stated the LASD on Wednesday.

Collins told a reporter for the San Gabrial Valley Tribune in 2014, that he grew up poor in Central Los Angeles before joining the military. After joining the LASD, he spent some time working in the department’s Lennox station, and was most recently assigned to the County Services Bureau. He has been placed on administrative leave.

The first of the meetings with undercover FBI agents and Collins occurred in August 2017, when an agent posed as a family member of a wealthy investor looking to finance an illegal marijuana grow house. (Obviously, this was before marijuana became legal in California on January 1, 2018.) Collins allegedly offered to provide security for the grow house and claimed to have three “teams” that already provided security for drug operations across San Bernardino and Los Angeles counties.

According to the affidavit in support of the complaint filed last week, this meeting concluded with the undercover agent paying Collins $5,000 in “good faith” money for future services.

Over the course of several meetings, Collins also made an ominous offer to “fix problems” for the undercover agent, in exchange for cash payment, according to court documents. This allegedly included physically assaulting people. In fact, according to the same documents, Collins claimed to have a very “professional” “team” comprised of “cops” who “travel…with guns.” He reportedly described how he and two others recently “handled” a situation for a “client” in Boston by setting a luxury truck on fire.

During a meeting in September, the undercover agent told Collins that he was having an “issue” with a person in Northern California, and, in exchange for $2,000, Collins allegedly performed and delivered a “work-up” on that person, which included obtaining that person’s home address and driver’s license number, according to documents.

Collins delivered the “work-up” in early October, at which time he allegedly said that he could provide additional services in relation to the Northern California person. “We can definitely, you know, kind of impact him a little bit.”

If Collins and the other three who were arrested on Tuesday are convicted of the drug trafficking conspiracy alleged in the criminal complaints, each defendant would face a sentence of up to life in prison.

This case is being prosecuted by Assistant United States Attorney Lindsey Greer Dotson of the Public Corruption and Civil Rights Section.