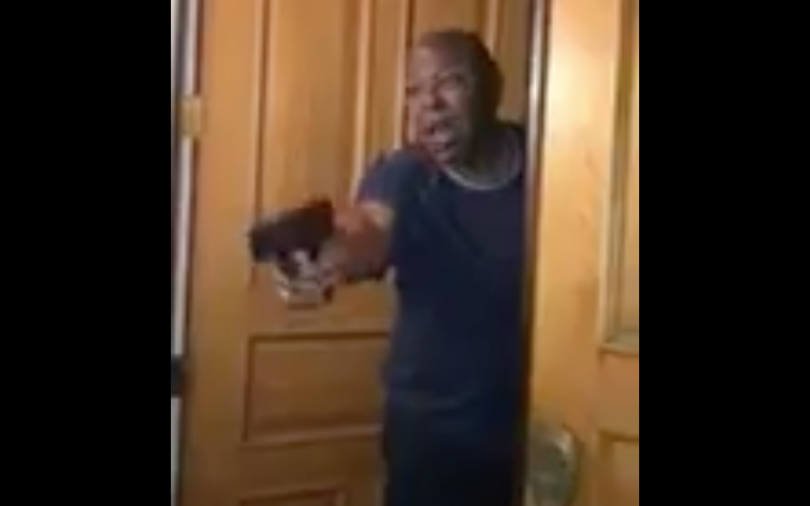 At around 5:45 a.m. Monday, the day before California’s primary election day, the husband of Los Angeles County DA Jackie Lacey pulled a gun on Black Lives Matter activists, who had gathered in front of the couple’s house in the wee hours of the morning.

Later in the day,  Lacey would confide at a hastily called press conference how threats she had received, along with other ongoing forms of harassment she described, had made her and her husband of 40 years, fearful.

Yet in the early morning, the group, which reportedly gathered peacefully, said they came to her house after Lacey repeatedly failed to meet with the families of the men who died at the home of Ed Buck, a well-known democratic donor, whom the district attorney’s office has been accused of dragging its feet in charging, with deadly results.

The alleged gun-pulling incident reportedly occurred when three of the activists, including BLM organizer, Melina Abdullah, who is also a Professor of Pan-African Studies at Cal State LA, approached the front door and rang the bell. At first, the door didn’t open, but Abdullah reported that she then thought she heard a gun cock, but second-guessed herself, wondering if the noise might have been produced by her imagination.

Abdullah caught the gun-brandishing on video, as shown below.

I’m front of DA Jackie Lacey’s house for that community meeting she promised with the @BLMLA crew. Rang her bell to invite her.

Her husband pulled a gun, cocked it, pointed it at my chest and said “I’ll shoot you. I don’t care who you are.” @WP4BL @RealJusticePAC @shaunking pic.twitter.com/WtazUWSJIC

At 10:30 a.m. Monday, the D.A.’s office notified news outlets that Lacey would be doing a press conference to explain the early morning incident.

At the press event, a very emotional Lacey confirmed that the man at the door of her Granada Hills resident was indeed her husband, David Lacey.

(David Lacey, now retired, was formerly an investigative auditor for the D.A.’s office.)

In the approximately quarter of an hour press briefing, she proceeded to describe getting ongoing threats, some of them death threats, Lacey said, then she talked about the feelings and fears that such threats and ongoing hostility had induced in them as a couple.

She also said that she had offered to sit down with the Black Lives Matters activists but felt such meetings should be one-on-one, in private, or in groupings of two or three, rather than public meetings, which she characterized as designed to humiliate her.

The D.A. said her husband’s response “was in fear,” and that he wanted to say “to the person that he showed the gun to” that he was “profoundly sorry.”

Just the two of them were home, Lacey told reporters. “And we expect that people will exercise their First Amendment right, but our home is our sanctuary.” She added that it was not the first time protestors had gathered outside her house.

“He meant no one any harm,” she said of her husband. “I just want to live in peace and do my job.”

Prior to the press conference, former public defender, Rachel Rossi, one of Lacey’s two challengers in the hotly contested L.A. County District Attorney’s race, released her own statement on the morning’s events.

“The collective grief and despair of our marginalized communities continue to grow as they are ignored,” Rossi wrote.

“As District Attorney, I will never run from the community. And I never thought I’d have to say it, but I will also never threaten to shoot–or have others threaten to shoot–community members protesting my actions.”

Lacey’s other challenger, George Gascón, has not put out a statement.