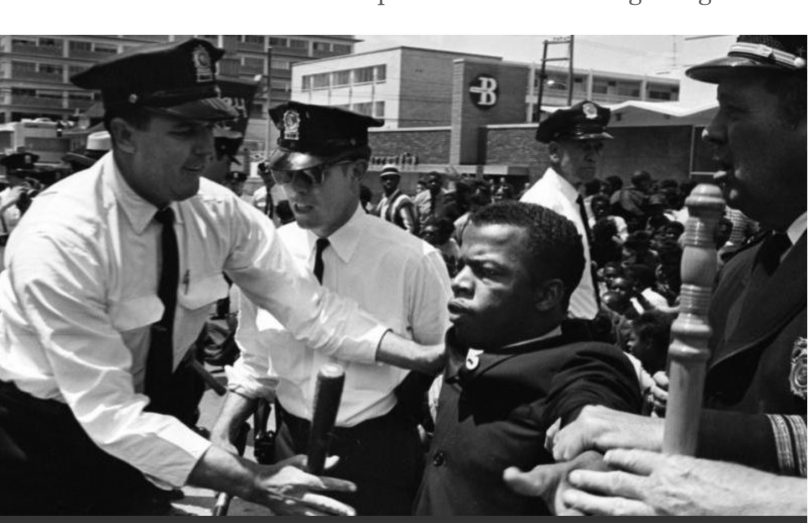 “We’re going to have generations for years to come that will be prepared to get in trouble, good trouble, necessary trouble.”

For many Americans, the loss feels incalculable.

As we absorb the news of his death, the videos below — and Lewis’s own tweet from ten days ago — provide some brief moments in his own words, allowing us to be reminded of the towering civil rights icon, the relentless opponent of injustice, the man who represented the 5th district of Georgia in the House of Representatives from 1987 until he died, whom his colleagues called the “conscience of the Congress.”

At 21, he was one of the thirteen original Freedom Riders, getting assaulted and repeatedly arrested as they traveled by bus challenging segregation, discrimination, and injustice in the Deep South.  At age 25, together with the Rev. Martin Luther King Jr., Lewis was among the small group that led around 600 marchers demonstrating for voters rights across the Edmund Pettus Bridge in Selma, Alabama, on what became known as Bloody Sunday.  That day he was beaten badly and nearly killed by state troopers who left him on the ground unconscious with a fractured skull.

Yet Lewis always refused to despair.

“We were beaten, we were tear-gassed. I thought I was going to die on this bridge. But somehow and some way, God almighty helped me here. We cannot give up now. We cannot give in. We must keep the faith, keep our eyes on the prize.”

He didn’t fight for himself, all these years, said those who knew him well.  He fought for the soul of the nation.

“When you see something that is not right, we have a moral obligation to say something, to do something. Our children and their children will ask us ‘What did you do? What did you say?'”

Rest in power, John Lewis. Thank you for teaching us the necessity of getting into #goodtrouble. We are grateful to you beyond expression.

59 years ago today I was released from Parchman Farm Penitentiary after being arrested in Jackson, MS for using a so-called "white" restroom during the Freedom Rides of 1961. pic.twitter.com/OUfgeaNDOm