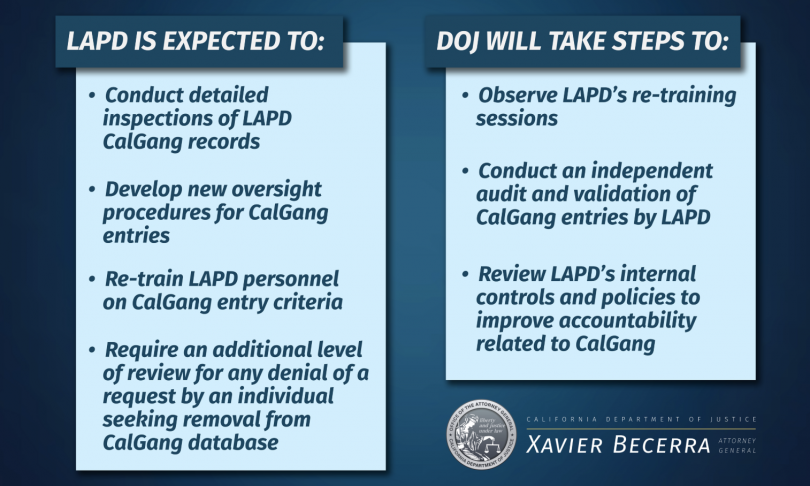 The California Department of Justice is launching a review of the Los Angeles Police Department’s use of the statewide gang database, CalGang, in response to allegations that LAPD officers have been intentionally mislabeling people as gang members, CA Attorney General Xavier Becerra announced on Monday.

The LAPD has been conducting its own investigation into the issue since early last year, after a mother complained that members of the department’s elite Metropolitan Division had falsely identified her son as a gang member. When department officials looked at the officers’ body camera footage, they found alarming discrepancies, and ultimately reversed the young man’s gang label. In looking at other officers’ videos, they found that other officers appeared to have penned inaccurate gang designations onto paper gang field identification cards, as well.

As many as 20 police officers are suspected of cooking the LAPD’s stop and search statistics by mis-designating people as gang members or gang associates — labels that carry considerable consequences and have historically been nearly impossible to reverse once they become part of the state’s CalGang database.

So far, LAPD Chief Michel Moore has sent one officer to a disciplinary panel. Moore has recommended that the officer be fired, as well as criminally prosecuted. The department will also retrain all Metro Division and gang enforcement officers in advance of more stringent criteria for including individuals in CalGang. (AG Becerra’s office is currently working on an updated set of criteria under AB 90 a bill passed in 2017 to reform the long-troubled CalGang system.)

“The CalGang database offers the most value to anti-crime efforts when the officers who utilize it receive high-quality information from it,” AG Becerra wrote in a letter to Chief Moore. “False and improper entries in the system undermine law enforcement efforts, calling into question the validity of the information being utilized.”

The California DOJ will conduct its own independent review of all CalGang entries submitted by LAPD officers and the body cam footage of those officers’ interactions with those individuals marked for inclusion in CalGang.

The DOJ will also analyze the LAPD’s policies and practices “to improve accountability for officers who use the CalGang system.”

In his letter to Moore, Becerra also noted that the DOJ also has the right to suspend or revoke the LAPD’s access to CalGang, if investigators find reason to do so, in the course of the state review.