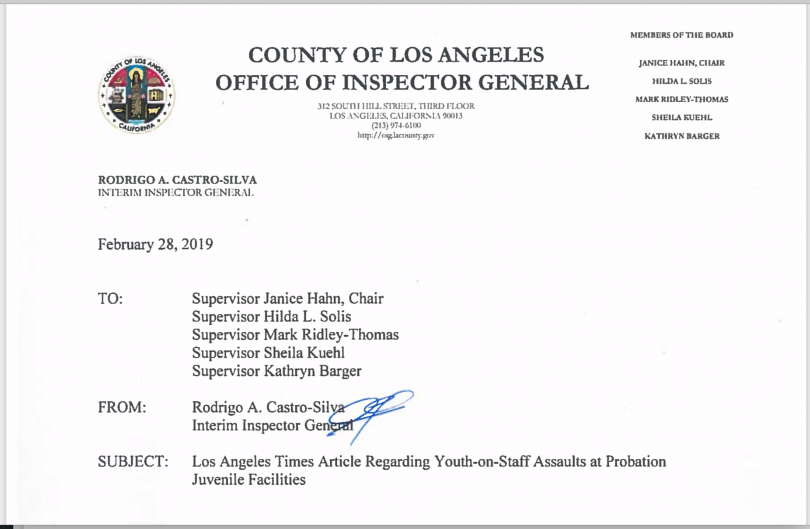 Overall, “the rate of assaults on guards more than doubled between 2015 and 2018,” wrote the Times, although they noted that the attacks had slowed slightly in the past year.

The story was based around data the Times had gotten from the LA County Probation Department “in response to a California Public Records Act request,” the story continued.  And these stats showed that,  at the county’s juvenile halls and camps, “the assault rate per 100 juveniles rose by more than 120%.”

In the three juvenile halls in particular, “the raw number of assaults on officers” jumped from 98 to 296,” the Times wrote. “Taking into account the declining population of detainees, that translates into a rate increase of 254%.”

When it appeared, the LA Times story was widely read by youth advocates and others who have a stake in the ongoing efforts at reform of LA County’s juvenile halls and camps.

Among those interested readers was Rodrigo A. Castro-Silva, the interim head of the Office of the Inspector General (OIG).*

After reading the story, Castro-Silva wrote a two-page memo about the data it included.

The memo—which WitnessLA has obtained—was distributed privately to each member of the board of supervisors on Thursday, February 28.

In it, the Interim IG listed the stats the LA Times had cited illustrating a spike in assaults on guards. His office too, wrote the IG, “…had reviewed the probation department’s data and data collection methods relating to use-of-force…and “youth-on-staff assaults” at the department’s facilities.

“Based on our review thus far, we have little to no confidence in the reliability of the Department’s data on youth-on-staff assaults…”  the IG wrote, the single sentence underlined for emphasis.

To better understand the rest of the IG’s memo, it helps to know the context in which it and the Times story arrived.

A little over a week prior to the day the LA Times story was published, the LA County Board of Supervisors voted unanimously to phase out the use of oleoresin capsicum (OC) spray, commonly called pepper spray, from the county’s juvenile camps and halls.

The idea that the county should ban the use of the burning aerosol on the kids in its care had been gathering momentum for a while.  Yet a more intense sense of urgency seemed to pick up speed after a 28-page report  compiled by the Office of the Inspector General.

The report had come about in response to a December 2018 motion authored by Supervisor Mark Ridley-Thomas, and co-sponsored Supervisor Janice Hahn, which asked the OIG to look into the recent discovery that the use of pepper spray in the county’s three juvenile halls had doubled—and in one case more than tripled—between 2015 and 2017, a fact that was perplexing since the youth population in probation’s youth facilities was continuing to fall.

When it arrived, the OIG’s rigorously-researched report painted a detailed and distressing picture of the way pepper spray was being overused and, in certain cases, horrifically abused by a portion of the staff members in the county’s three juvenile halls and two of its youth probation camps.

Two weeks after the OIG’s report was released, the board passed its motion to phase out the use of OC spray, despite the fact that a significant number of Detention Service Officers (DSOs), who worked in the county’s juvenile halls, spoke to the board, when it came time for public commentary, about why they felt that, if pepper spray was taken away from them as a tool, the county’s juvenile halls  would not be safe for staff members or for youth.

The board passed the OC spray ban unanimously anyway, but with a strong recommendation for additional training for staff in de-escalation techniques, which many detention officers have repeatedly requested.

Eight days later, the LA Times published the data they’d acquired from probation showing an alarming rise in youth assaults on staff in the halls and the camps, stats that they said validated “concerns frequently raised by detention officers and their union leaders.” These officers and union people told the Times that the increase in “tense and violent situations with juveniles” was much of the reason behind the “rise in pepper-spray use,” which had “prompted scrutiny from county leaders”—and thus the ban.

The officers, the Times wrote, said they needed the spray—“which advocacy groups say is inhumane for subduing unruly juvenile detainees.”

“Pepper spray needs to stay,” said officers who spoke with the Times, two of whom described harrowing experiences of being beaten by kids.

The search for good data

There were three main illustrations that Interim IG Castro-Silva listed as reasons why his office had little confidence in the probation department data cited by the LA Times.

First, he wrote, probation leadership told them that the department “has found that its line-level staff were routinely inaccurately reporting youth-on-staff assaults.”

In the IG’s own investigation for their February 4, report to the board, they noted several such incidents in which “the use-of-force reports filed by staff described youth behaviors as aggressive or threatening, even when available video footage shows that youth appeared to pose no threat to staff.”

This was particularly problematic when trying to assess the accuracy of use-of-force reports and “subsequent data,” said the IG, “because not all use-of-force incidents are captured on video.”  It seems that, unlike the nearly wall-to-wall camera in the county jail system, for better or for worse, there are comparatively few cameras in the county’s troubled juvenile halls.

Second, according to Castro-Silva, the department uses an outdated and inaccuracy-prone system of data-gathering related to youth-on-staff assaults.  This method involves handwritten “paper force reports,” scribbled literally on forms with checkboxes from which other staff members have to fish out the “relevant data,” and record it on Excel spreadsheets. This is done by a “revolving set of available staff,” who may or may not have even the slightest familiarity with the incident in question, or any way of clarifying the salient details of the various scribbles and box-checkings should the paper reports be at all ambiguous. All of this may lead to “data integrity issues,” wrote the OIG in something of an understatement.

Finally it turns out that, according to the IG, probation’s policies don’t precisely define the term “youth behavior constitutes assaultive behavior.”

While their review is ongoing, the IG concluded, “the foregoing leads us to believe the data provided to the L.A. Times is unreliable, which calls into question the article’s conclusions.”

When we asked the probation department what it thought about the Interim Inspector General’s memo, a department spokesperson told us that, unfortunately, probation was “unable to comment on the OIG report…as it is not a public document.”

In April of last year, WitnessLA made a similar request for similar data (albeit not for as extensive a time frame as the LA Times used), which probation officials kindly supplied.

In the resulting story, reporter Lauren Lee White found that as she drilled down into the matter of the youth attacks on staff that were distressing a great many detention officers, an interweave of complex and multi-layered issues emerged—issues that could not be viewed accurately through the lens of simple cause and effect.  (You can read the story here.)

Yet, in exploring such problems, and imagining their possible solutions, presumably it does help to have good data—which is an arena in which LA County Probation seems to continue to be notoriously challenged.

Ian Kysel, the staff lawyer for the ACLU of Southern California who has been doing work on the formation of the new Probation Oversight Commission, which is presently in process, agreed with the OIG’s interpretation of the unreliability of the force data.

“There’s virtually no system in place to accurately track and aggregate this data” that, he said, “should inform departmental management…and decision making.”

Supervisor Mark Ridley-Thomas who has authored or co-authored many of the board’s recent motions pertaining to youth justice reform, also expressed dismay at the OIG’s conclusions.

“Safety for both youth and staff in our juvenile facilities is of paramount concern,” he told WitnessLA. “But to address a problem, we must accurately understand it.”

For this reason, he said, he was “deeply troubled that the OIG has little to no confidence in publicly released data from the probation department on youth-on-staff assaults.

“We must do better — not only in creating rehabilitative and safe environments, but also in tracking data. Accountability and reform will not happen without it.”

*Editor’s note:  Inspector General Max Huntsman has been out of the office due to health reasons but is reportedly on the mend.