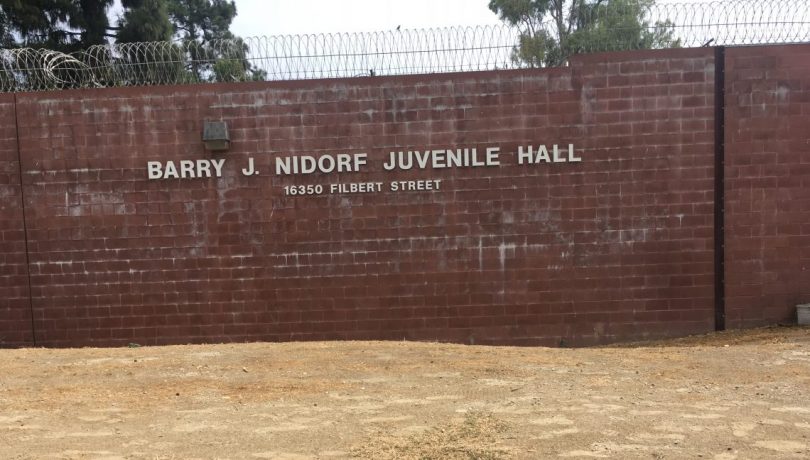 The mystery intruder was reportedly able to waltz past security in Barry J, as the Sylmar-located youth lock-up is known, at about 4:30 p.m., and then proceed to make his way into one, possibly two youth living units, where reportedly still no one stopped the guy in a paper painter’s suit, an orange baseball cap, and a non regulation mask, as he pulled out implements and proceeded to swab possibly as many as 15 kids for the COVID virus.

His entrance, and parts of the rest of his activity “was caught on security cams around the facility,” two probation sources told us.

The implements for swabbing were reportedly contained in a brief case, which the video feed reportedly suggests that no one examined when he entered the facility.

The invader evidently also made it past what is called Movement Control, a second check-point the man should have run into before he could proceed deeper into the facility toward any of the units.

“He should never have gotten past movement control,” said a retired detention officer. “Never.”

Once in the unit with the kids, post-swabbing, the man reportedly asked the kids he’d swabbed for additional personal information, such as their parents’ names and addresses.

Throughout this sequence of events, no-one in a supervisory position evidently attempted to challenge the invader. Most importantly, those whose job it was challenge him, didn’t. By the time that a staff member became suspicious, and passed their suspicions up the line, reportedly causing armed responders from within probation to be notified, it was too late.

In subsequent days, news of the swabbing intruder quickly spread around the department, with an unsettling effect.

“People are a little uneasy now, knowing that someone was able to enter the facility unchecked and was able to easily enter the living unit of the youth we house there,” a probation source who asked to remain anonymous told WitnessLA.

Things could’ve been a lot worse, said the source, if the unchecked intruder had a weapon on him.

“The truth is,” said another source who works at Central Juvenile Hall, “we have no way of knowing whether or not he did have weapon.”

Message from the top.

On Wednesday of this week, LA County Probation Chief Alberto Gonzales, sent out an explanatory email—which WitnessLA has obtained—outlining to staff members and other officials what had occurred.

Gonzales, who was sworn in as chief almost exactly one year ago, on February 1, 2021, after serving as the reformer probation chief of San Diego County, is generally well liked by both staff and justice advocates, who praise his efforts to being reform to LA County’s trouble-haunted department.

“Local authorities have been notified, an investigation is underway, and the department is also conducting an internal investigation,” Gonzales wrote.

Sources told WitnessLA that the internal investigation was set to kick into high gear on Saturday, February 5.

In the meantime, Gonzales wrote, “all youth and staff members are safe,” and “corrective action is being implemented to enhance security measures at all probation facilities and offices.”

Visitors and vendors, wrote the chief, “should always be accompanied by probation staff that works at the location.”

Two additional probation sources told WLA that they believed the incident points to “a deterioration in security at the Sylmar facility,” as one source put it.

“In the past, this just wouldn’t have happened.”

Attempts at oversight of the county’s youth justice system in the last few years would tend to lend credence to the source’s statement about problems in the both of the department’s main youth lock-ups.

As readers may remember, last fall, on September 17, 2021, the California Board of State and Community Corrections (BSCC) voted unanimously to declare that LA County’s two juvenile halls — Barry J. Nidorf Juvenile Hall and Central Juvenile Hall — were out of compliance when it came to multiple basic standards of care. Thus, these two facilities were declared “unsuitable for youth habitation.”

This drastic vote came after months of inspections, and resulting reports pointing repeatedly to changes LA County urgently needed to make. Finally, state board members found they had no way to avoid voting to declare Barry J. and Central Juvenile Hall as unsuitable for kids.

To make matters worse, the BSCC’s vote followed a legal settlement announced by California Attorney General Xavier Becerra in January of 2021, which required LA County to fundamentally transformation in the way that Los Angeles County Probation, and the LA County Office of Education (LACOE) treats the kids in Barry J. and Central Juvenile.

The settlement with the AG came after Bacerra’s DOJ engaged in a deep probe into conditions in the two halls, beginning in October 2018, in order to determine how well or poorly LA County treats the kids in its youth detention facilities. The answer wasn’t good.

After the new incident with the mystery intruder, several sources laid the responsibility at the feet of management, although not those at the very top of the department.

“All of the top supervisors in charge of the facility, up to the level of bureau chief, need to be held accountable,” said one of the veteran probation sources.. “We have Chief Gonzales, and the Chief Deputy Probation Officer, Karen Fletcher, and some others who are making changes.”

But, said the source, the changes haven’t yet reached holdovers from a previous problematic culture within the department, who many feel are still causing damage.

“So, this is what you get,” said the source.

In September 2021, during the BSCC vote, BSCC Board member and youth advocate Scott Budnick said something similar in a statement he sent to WitnessLA.

“I began going into Barry J. Nidorf Juvenile Hall in February 2004, and have been inside almost every week for the last 17 years,” Budnick wrote.“I know most of the staff in the facility, and have made friendships with many of the Probation staff who deeply care about the kids in their care.

“Yet, despite the many talented and caring people on staff, some kind of hardcore pressure is needed at this moment if anything is to change,” he said.

“After having months and years to correct these issues,” said Budnick, “it is clear that there are those in LA County Probation that are not taking this seriously, and have undermined the last Probation Chiefs and will continue to undermine Chief Gonzales.”

Now, five months later, Budnick’s opinion seemed to be further demonstrated when, on Thursday, February 3, the BSCC and examiners visited Central Juvenile Hall to see if the facility was in compliance with the state’s regulations to the degree that is minimally necessary.

While in the Central Juvenile Hall Hope Center, BSCC staff discovered a kid who said he had been restricted in his room in the Hope Center for 11 days, had not been receiving exercise or recreation outside of the room,

This incident alone would reportedly put the facility solidly in the non-compliant category when it comes to the issue of room confinement, otherwise known as solitary confinement.

When we checked with a veteran detention officer who works in Central Juvenile Hall, the source told us that such over-confinement of kids continues to happen with discouraging frequency.