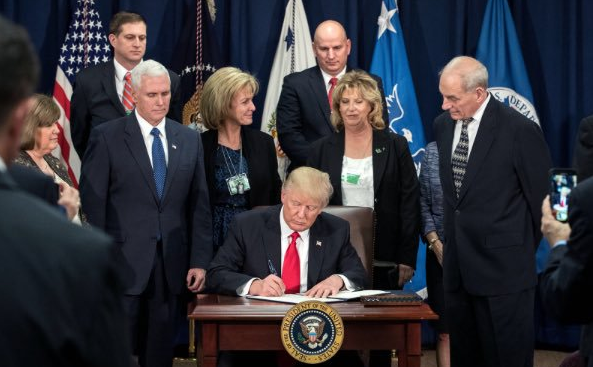 In their amicus brief, the coalition argued that the district court decision should not be overturned because the travel ban took an “overwhelming” anti-Muslim position, and failed to give evidence that the ban was an imperative measure to protect national security. If reinstated, the ban would also cause “significant harms” to states, residents, universities, and medical institutions, according to AG Herring and his coalition. “Even a temporary reinstatement of the travel ban would discourage international candidates in the six countries from accepting offers of admission or employment,” the brief reads. Reinstating the travel ban would “reduce acceptances, because foreign students will choose schools in Canada or elsewhere for fear they will be denied entry to the United States.” There were more than 15,000 students from the six banned countries who attended college in the US during the 2015-2016 year, according to the brief.

“We’re continuing the fight because President Trump’s Muslim ban is so antithetical to our values as Virginians and Americans and so potentially damaging to our Commonwealth and our residents,” said Attorney General Herring.

California’s “top cop,” AG Xavier Becerra, who stepped in after former AG Kamala Harris was elected to the US Senate, has shown himself to be California’s “photo negative” of Donald Trump, the Atlantic’s Michelle Cottle writes in the magazine’s May issue.

“Let me be clear – the Administration’s travel ban is unconstitutional, and I am committed to fighting it every step of the way,” said Attorney General Becerra. “This travel ban is not about our national security. This travel ban is about targeting people based on their religion. It is my duty to stand up against discrimination, and I am proud to be part of the coalition fighting against the travel ban.”