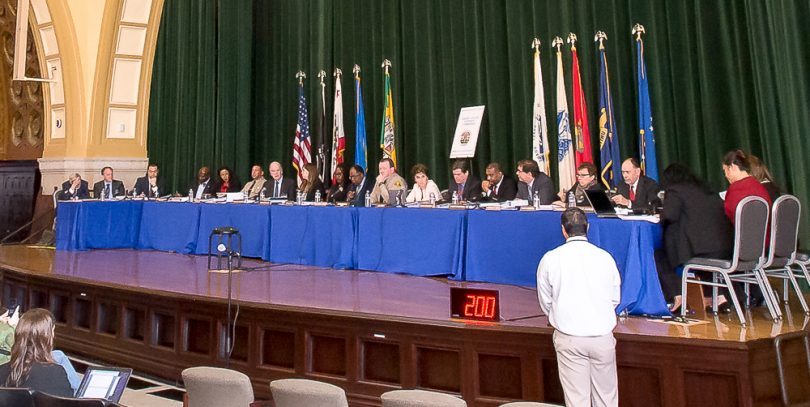 AFTER YEARS OF SCANDAL, OVERSIGHT AT LAST

After months of anticipation, on Thursday, January 26, the newly minted Civilian Oversight Commission for The LA County Sheriff’s Department had its public launch.

The commission, which is made up of nine members who serve for a term of three years, was officially born in November of last year. But this meeting, which began at 9:30 a.m. at Bob Hope Patriotic Hall—a 1925-built structure located southwest of downtown, that is part of the of Department of Veterans and Military affairs—was the first time the group had met with the public.

(From now on, the commission is scheduled meet on the fourth Thursday of every month at a series of rotating locations.)

LA County Supervisor Mark Ridley-Thomas, who was the principal author of the motion that created the commission, administered the oath of office to its members during a ceremony that took place before the actual meeting began.

Although the introductory outing for the group wasn’t exactly packed to the rafters, it drew a healthy attendance of interested community members who were anxious to communicate concerns. Some brought up specific personnel complaints, while several of those who showed up expressed a great deal of fear over President Trump’s recent announcements about far stricter immigration enforcement. They were frightened, they said, that the LASD might suddenly start working with the feds to round up immigrant residents.

Another topic that generated interest and concern was the announcement earlier this month by LA County Sheriff Jim McDonnell, that the sheriff’s department would begin regular use of “unmanned aircraft systems,” or drones. McDonnell said that the remote controlled mini-aircraft would be employed to assist deputies in emergency situations, such as ““search and rescue, explosive ordinance detection, hazardous materials incidents, disaster response, arson fires, hostage rescue, and barricaded, armed suspects.” But, although McDonnell said the things would not be used for random surveillance, several of those at the meeting were still worried. With similar drone-related concerns in mind, on Tuesday, the board of supervisors told Inspector General Max Huntsman, and the brand new commission to look further into the unmanned aircraft program, a task that should provide an instructive early test for the nascent body in that one of the issues that was the most contentious during the lengthy planning stages for the body, is the fact that commission has no real power.

It cannot subpoena department documents, and is only an advisory group. Yet, its nine members are not, in general, people who will settle for being—so to speak—decorative. As IG Huntsman told KPCC’s Frank Stoltze last November, “I think it will be powerful because of the people on it.”

The commission will work with Huntsman, and his staff at the Los Angeles County Office of Inspector General (OIG), which will provide the commission its investigative function.

Interestingly, the commissioners were required to go through training to ready themselves for their role, which, according to the ordinance that officially created the commission, was to cover such topics as “use of force, firearms, custody, mental health issues, juvenile justice and patrol.”

CAN IT BE A MODEL? Either Sheriff McDonnell, or another department higher-up is required to attend each commission meeting. On Thursday, McDonnell himself attended for about an hour, and he seemed genuinely enthusiastic that the commission had finally launched itself.

Sheriff McDonnell was an early and vocal supporter for the idea, although he was against the commission having the subpoena power that many advocates felt was necessary. On the other hand, the sheriff was a member of the Citizens Commission for Jail Violence, which generated a report that was scathingly critical of the department and which arguably triggered the commission’s creation. McDonnell said Thursday that the department needs “another bridge to the communities we serve.” Working with the commission, he said, could be “a national model that shows citizens and the police can put party politics and special interests aside and roll-up their sleeves, speak with respect and get the job done.”

At a time when police accountability is questioned, McDonnell said, “we have the opportunity to be the national model of transparency with the layers of accountability our department has implemented.”

At least that is the hope. Just to remind you, here are the nine commission members:

Hernán Vera, who was appointed by Supervisor Hilda Solis, is an attorney who, until 2014, worked as the longtime president and CEO of the pro-bono law firm, Public Counsel. Vera was on the original working group that hammered out a shape for the commission, and was one of the group’s members strongly in favor of subpoena power for the commission.

Xavier Thompson, appointed by Supervisor Mark Ridley-Thomas, is the pastor of Southern St. Paul Baptist Church in Los Angeles, and president of the Baptist Ministers Conference of Southern California. He was part of a group of pastors active in trying to mediate understanding between Black Lives Matter activists, city government and law enforcement, and has a lengthy background in community involvement.

Patti Giggans, appointment by Supervisor Sheila Kuehl, is the executive director of Peace Over Violence, a non-profit that engages in “intervention, prevention, education and advocacy” for victims of abuse and violence. She was the recipient of the Peace Prize from the California Wellness Foundation, and founded the first women’s martial arts school in Southern California in 1978.

JP Harris, appointed by Supervisor Don Knabe, is a well-liked former lieutenant with the Los Angeles County Sheriff’s Department, with 33 years on the job.

Robert Bonner, appointed by Supervisor Mike Antonovich, is a former federal judge, a former US Attorney, and the former head of the DEA, and the US Customs Service, and what became Border Patrol. Perhaps most relevantly, Bonner was a member of the Citizen’s Commission on Jail Violence, and one of its most outspoken members.

Sean Kennedy, is the executive director of Loyola Law School’s Center for Juvenile Law and Policy, which pushes for “systemic reform” of the juvenile justice system in LA County. Previously he was the Federal Public Defender for the Central District of California, and Chief of the Federal Public Defender Capital Habeas Unit. In 2013, he was named as Criminal Defense Attorney of the Year by the LA County Bar Association

Heather Miller is a rabbi of the LGBT- founded Jewish congregation at Beth Chayim Chadashim, and one of the six nominees for the commission put forth by the influential activist organization, Dignity and Power Now.

Priscilla Ocen, who is also a nominee of Dignity and Power Now, is an Associate Professor at Loyola Law School. Before Loyola she was a Critical Race Studies fellow at UCLA School of Law, and a Thurgood Marshall Fellow at the Lawyers’ Committee for Civil Rights of the San Francisco Bay Area. Ocen is an expert on the relationship between race and gender and punishment.

Lael Rubin was a Deputy District Attorney in Los Angeles for over 30 years, where she became well known for her work on a string of high profile cases. In 2000, Rubin was recruited to become special counsel to Los Angeles DA Steve Cooley, helping him on, among other things, his work to reform Three Strikes.

Photos by David Franco/Board of Supervisors