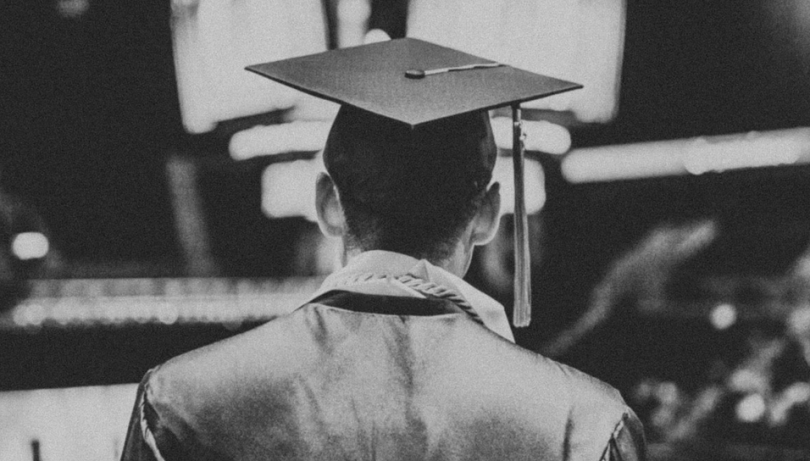 Family members and other outside visitors received permission to come to the facility for the June 24 event, which honored the MTC graduating classes of 2020, 2021 and 2022. Adorned in black caps and gowns, the 20 graduating students sat together toward the front of SQ’s chapel, where many of the institution’s biggest events are held.

The prison has been on complete or partial COVID-19 shutdown throughout most of the period from March 2020 to today, resulting in the postponement of the previous years’ graduation ceremonies. For many, the MTC graduation signified the beginning of better days ahead.

Before he began his valedictorian speech, John Levin told the audience how, even as a child, he practiced writing speeches for all sorts of imaginary occasions: receiving his star on the Hollywood Walk of Fame; being the winning jockey at the Kentucky Derby, the first pick in the NBA draft, or employee of the month at Walmart; and even being awarded a Grammy for “Song of the Year” for a duet with Rihanna.

“I’ve been carrying around this folder for decades,” he said as he flipped through a sheaf of papers. “Ah, here it is — valedictorian for the awesomest college in the world.”

This was the first in-person graduation ever for MTC, which was previously known as Prison University Project, affiliated with the now-defunct local school, Patten College. In January 2022, MTC became the nation’s only independent and fully accredited college program to operate solely inside prison walls.

“I’m extremely honored to be here for the very first Mount Tamalpais College graduation,” said Theresa Roeder, chair of MTC’s board of trustees. “This is the true meaning of the word ‘resiliency.’ You should be proud of yourselves. So many people are out there cheering you on from afar, very loudly.”

In his commencement speech, Warden Ronald Broomfield called the graduation “an extraordinary achievement in light of the last couple of years — and a very important day for San Quentin as well.”

He said the processional was “the highlight of his year.”

Broomfield offered what he called a “five-cent history lesson.” He spoke about the life of the famous African American scientist George Washington Carver and how it resonated with his own thoughts on the accomplishments of the graduates.

“‘Education is the key to unlock the golden door of freedom,’” Broomfield said, quoting Carver. “I congratulate you for being able to achieve freedom while remaining incarcerated.”

Noting Carver’s lifelong commitment to “bringing the greatest good to the greatest number of my people,” the warden asked, “Who are your people? Who are you going to lift up?”

He encouraged the graduates to “continue to endure so that you can unlock the golden door of freedom for your people.”

MTC founder and president Jody Lewen called the day an “extremely historic moment,” before introducing Chief Academic Officer Amy Jamgochian for “the ritual we’ve been waiting years to perform ourselves.”

Jamgochian conferred upon the graduates their degrees one by one as their names were read aloud. Each took the chapel stage to pose for photos while shaking hands with Lewen. Afterwards, they joined together to move their tassels from left to right en masse.

Darryl Farris’ mother and sister made the trip from Sacramento to see him graduate.

“Oh my God. As soon as the music began, the waterworks started,” Farris’ sister, Trina, said of her tears of joy. “I know he worked really hard under the circumstances. I’m so proud of him.”

“He’s learned and changed a lot since being here,” she said. “I’ve seen how he’s made the foundation of his life-to-be at San Quentin.”

The graduation was possible due to a recent shift in policy by the California Department of Corrections and Rehabilitation (CDCR) that allowed San Quentin to return to somewhat normal operations in mid-June even though a single positive test result in the North Block prolonged its quarantine period for yet another 14 days. Some North Block residents who passed a rapid test were allowed to attend the graduation ceremony.

The previous COVID-19 protocol — in place since the devastating outbreak of 2020 — required that all units be completely off quarantine before normal operations throughout the facility could resume.

This story was originally published by Prison Journalism Project. ﻿

Joe Garcia is a journalist at San Quentin State Prison and a staff reporter for San Quentin News, and a contributing writer for the Prison Journalism Project.