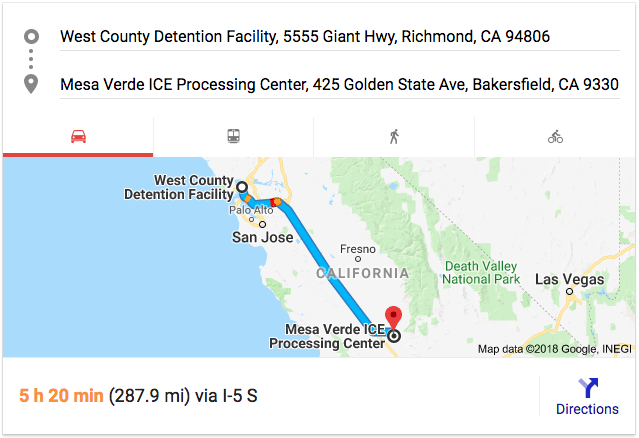 The nine detainees were shackled for most of the trip, without access to adequate food and water or bathroom breaks. For several hours, the women were stuck in the back of a sweltering windowless van without air flow. The riders said they felt like they were suffocating. At least one woman vomited and fainted.

One of the women, Floricel Liborio Ramos, 38, whose immigration case was pending, and who had been in the U.S. for 20 years, wrote a detailed account of the transport.  Her “heart felt like it was shutting down,” she wrote, and she believed she would die in the hot van.

“I was surrounded by several other women and we were all worried and scared,” Liborio Ramos said. “We were riding in a vehicle with no windows and no air. We’d been put there by ICE agents, after our wrists and ankles were shackled. We had no food or water. I felt extremely sick, like death was near.”

Liborio Ramos says the women, scared for their lives, started screaming and banging on the walls of the old van, “but they couldn’t hear us [across the partition],” or the drivers chose not to listen.

“These women were treated like cargo, with no regard for their health, safety, or human rights,” said Vasudha Talla, an ACLU NorCal staff attorney. “The federal government must abide by the U.S. Constitution, which guarantees basic rights to everyone in this country.”

The ACLU and Goodwin Procter also filed a Freedom of Information Act lawsuit seeking information regarding U.S. Immigration and Customs Enforcement’s contract with G4S Secure Solutions, and whether the private prison company was responsible for the dangerous 24-hour journey.

G4S has come under fire in the past for mistreatment of detainees abroad.

The ACLU requested information via an FOIA request in December 2017 and April 2018, regarding ICE’s relationships with private transport contractors, and the policies and procedures for detention and the transportation of detainees. ICE did not respond.

The FOIA lawsuit was filed in the United States District Court for the Northern District of California.