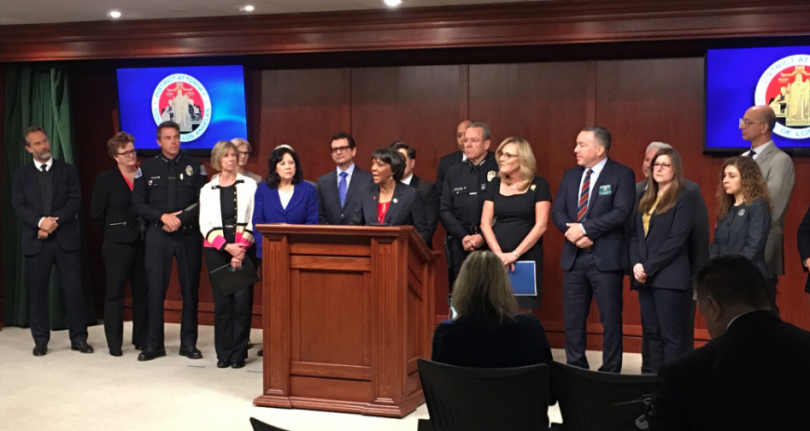 In an effort to divert the pipeline of mentally ill people funneled into Los Angeles County jails, the LA County District Attorney’s Office has launched a new Mental Health Division.

The division is the first of its kind in the state, and possibly the nation, according to LA County District Attorney Jackie Lacey, who announced the addition on Wednesday, flanked by LA County Supervisors, law enforcement leaders, including LA County Sheriff Alex Villanueva, and judges.

The 12 prosecutors staffing the Mental Health Division will focus on expanding the use of community-based treatment and services for the county’s mentally ill, a population that is disproportionately criminalized. The division will offer guidance to the county’s 1,000 prosecutors, as well as mental health training to law enforcement officers and other first responders.

According to the Office of the Inspector General, the LA County jail system, which has an average daily population of around 17,000, housed 5,046 men and women who suffer from mental health conditions, as of May 2018. The Bureau of Justice Statistics estimates that 64 percent of the jail population nationwide has a mental health problem.

“The goal is to get [a person] treatment before someone has to call the police,” DA Lacey said on Wednesday. “That really is the goal.”

The division will also review the cases of people who have already come into contact with the criminal justice system who have been declared incompetent to stand trial, as well as defendants who are requesting alternative sentencing due to their mental health status.

A directive from DA Lacey allows prosecutors to take a defendant’s mental health status into consideration while deciding whether to send someone into a community diversion program. Lacey says she wants deputy DAs to “make courageous decisions and do the right thing” in cases where prosecutors could “help another human being in crisis,” rather than criminalize them.

The new branch’s mission, according to Lacey, is to “protect the public and to assist people in getting the mental health and other services they need to be productive members of our community,” while reserving incarceration “for the most serious and violent offenders.”

The launch of the new mental health division lines up with the arrival AB 1810, a controversial law that went live on January 1.

That law, which was tucked into the state budget, as a trailer bill, authorized a pre-trial diversion program for people charged with misdemeanors or felonies who have certain mental disorders (including those found incompetent), and who do not pose a serious risk to public safety. Under AB 1810, the Department of State Hospitals must launch a grant program to support counties’ new or existing diversion programs. These programs must provide “clinically appropriate” or “evidence-based” treatment and wraparound services.