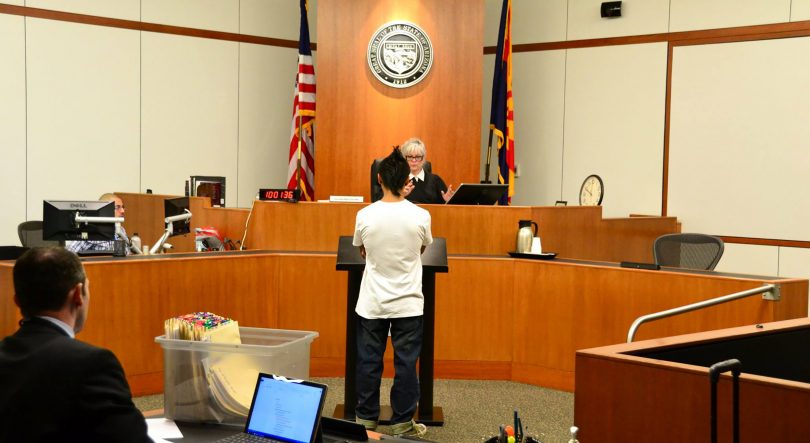 There’s a new, recently-launched documentary podcast we thought might interest you. It is called The 70 Million, named for the 70 million Americans, eighteen-years-old or above, who have a criminal record, and it aims to look at criminal justice reform through rigorous reporting, and great storytelling.

Season one of the 10-episode series looks in particular at what the producers describe as “the toxic impact of local jails on people and communities across the country.” But the series doesn’t just look at the problems; it also chronicles what community members,  local leaders, and others are doing about these problems.

This series, made possible by a grant from the Safety and Justice Challenge at the John D. and Catherine T. MacArthur Foundation, and hosted by veteran author and editor, Mitzi Miller, begins with a story about Pima County, Arizona, which formed a special committee called the Community Collaborative, to figure out how to safely send fewer people to jail in the county. The Community Collaborative was made up of judges, lawyers, law enforcement officers, and also people who had themselves spent time behind bars.  The group proved to be both very active and unusually effective.

One of the strategies that the Collaborative strongly recommended was a new initiative that allowed those with minor offenses to face a judge and resolve outstanding warrants at night or on weekends,  without facing time in jail.

After the court was launched, in addition to significantly reducing Pima County’s jail population, the podcast shows how the ability to go to court during times other than regular work hours made a huge difference for a great many people, and thus kept a small legal mistake from snowballing into a larger, more expensive one,  both for the lawbreaker, and the taxpayer.

There is much more to this story, as you’ll find if you listen to Episode One of the series here.

But in the meantime, read the story below  by ​San Francisco reporter, Jesse Alejandro Cottrell, who reported on the Pima County specialty court, and some of those whose lives it affected, for The 70 Million.

In 2016, Pima County, Arizona—which includes the city of Tucson—started holding evening and weekend court sessions for folks who haven’t committed a severe crime but who have outstanding warrants for failure to appear in court.

These warrant settling courts were created in part by the Community Collaborative, a group of judges, police, prosecutors, defense attorneys, community activists, and formerly incarcerated people who work together on local justice initiatives.

I reported on the collaborative and their work for 70 Million, a new open-source podcast about the criminal justice system in the United States.

One day while visiting the court—known as the Pima County Consolidated Justice Court—I met Carlos Olivas. In a hurry to leave, he walked down the court’s hallway as quickly as he could without drawing attention to himself. I didn’t think he’d stop when I jumped in front of him to ask for an interview. None of the dozen other people I’d tried to speak to at court had stopped. But Carlos did, and agreed to talk to me. I noticed that he was drawing shallow breaths. He looked pretty shaken.

“I was convicted for having possession of paraphernalia,” Carlos explained when I asked him why he was in court that day. “And, I missed a couple court dates.” He was embarrassed to admit that, but he shouldn’t have been. Many of the other people scurrying through the courthouse halls that day had also missed their dates and had come to court for the same reason Carlos had: to face a judge and hope to not get thrown in jail.

Months before I met him, police had found a marijuana pipe on Carlos. He thought that he didn’t have to go to court for such a minor offence. He was wrong. After Carlos missed three court dates, the presiding judge ordered a warrant for his arrest. Carlos argued he never received notice of the warrant, so he had no idea that it existed. If a cop had pulled him over for speeding, Carlos could’ve gone to jail.

Even if Carlos had known there was a warrant out for his arrest, it would’ve been difficult for him to handle it. Court hours are usually regular business hours. And Carlos worked everyday as an HVAC repairman. Going to court would’ve meant losing a day of work and maybe even losing his job.

Instead, the day I met him in late April, Carlos had just pled guilty to a misdemeanor, was ordered to see a drug diversion counselor, and could walk away a free man. More importantly, Carlos didn’t have to miss a day of work. His court session took  place in the evening.

Two years ago, Pima’s jailhouse was near capacity. Local politicians were considering building a new jail to house the growing population of incarcerated people. While reporting in Pima County at that time, I met Francisco Juez, a man who in 2015 had a warrant out for his arrest for failing to appear in court to deal with a bike riding ticket. Like Carlos, Francisco didn’t know that the warrant existed. Then one day, a police officer pulled him over for illegally riding his bike around a construction zone.

The officer realized that Francisco had an outstanding warrant and placed him in custody, where Francisco would sit for nine months because he couldn’t afford to post bail. Eventually a judge determined that Francisco wasn’t riding his bike illegally around the construction zone and set him free. But the damage was done. Francisco lost his job, and his teenage daughter hasn’t spoken to him since. When he told me about his daughter, he wept.

The Community Collaborative was created with the intent of averting stories like Francisco’s and preventing Pima County from having to build another jail. Since the warrant resolution court held its first session in June of 2016, 1,500 warrants have been quashed. As a result of this initiative and others promoted by the collaborative, Pima County’s incarceration numbers have fallen steeply.

By the end of our interview, Carlos seemed less stressed. The realization that he wasn’t going to jail sank in. He even smiled when I asked him what he planned to do with the rest of his day. “Just kick back at home,” he said. “Do some cleaning, drink a beer, chill with my kids.”

Now if you want to hear more from this series, go on to Episode Two, which tells the story of a veterans court in Boston. Thanks to this court, those Boston vets who have run-ins with the law don’t always have to do jail time. The court also helps in finding treatment for PTSD,  getting sober,  and aids in locating work for the men and women who come before it.  In the course of the podcast, reporter Heidi Shin talks to an Iraq and Afghanistan vet about his struggles with alcohol and PTSD, and also with judges, outreach specialists, and counselors about what it takes to divert veterans away from the “prison pipeline.”

This story about the unusual Pima County night court, by Jesse Alejandro Cottrell, was first published in the Think Justice Blog of the Vera Institute of Justice.