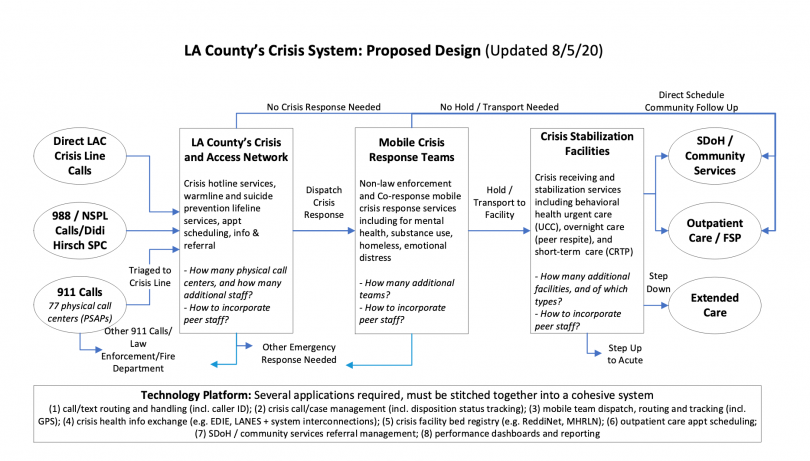 In June, in response to the killings of George Floyd, Rayshard Brooks, and others during encounters with law enforcement, Los Angeles County Supervisor Janice Hahn introduced an “Alternatives to Law Enforcement for Crisis Response” motion directing county leaders reimagine the 911 system and how to make space for “non-law enforcement response” to emergencies.

Specifically, Hahn’s motion, which the board unanimously approved, directed the Department of Mental Health, in conjunction with its Health and Human Services Crisis Response Coordination Steering Committee, to come up with ideas for either a crisis response phone number separate from 911, or a way to triage and divert calls within the 911 system, that would send non-law enforcement teams to answer health and human services calls, rather than armed officers. This proposal is aligned with the county’s Alternatives to Incarceration Workgroup, which, in March, offered 144 recommendations for making Los Angeles a “care first, jail last,” county.

Too often, sending out law enforcement to respond to people in crises related to mental health or substance use, or to people experiencing homelessness, results in escalation of sensitive situations that could be better handled by unarmed health and social workers.

On August 14, the steering committee returned to the board of supervisors with a preliminary report and set of recommendations for changing crisis response in LA County.

On Tuesday, September 29, the board will consider whether to move forward with those recommendations via a new motion from Supervisor Janice Hahn.

While LA County has, in addition to 911, several crisis call centers, including a Dept. of Mental Health line and the Didi Hirsch Suicide Revention Center, the current system could be improved in many ways, according to the report. While 911 is managed by law enforcement in Los Angeles, there are large jurisdictions elsewhere in the country (Houston, for example) in which 911 is managed by a non-law-enforcement entity that triages calls and determines which calls do not require response from police. Since its switch to this alternate 911 system, Houston has reduced overall dispatches by 51 percent and reduced response time for dispatched professionals by 50 percent, according to preliminary data.

“LA County is in need of a true regional crisis call center network,” the report says, “with shared standards for triage, the ability to dispatch non-law enforcement crisis response teams, and a shared view into available crisis stabilization resources, including treatment beds with an overall goal of minimizing law enforcement response to the maximum extent possible.”

The crisis response report also recommends that the county considerably increase the availability of behavioral health urgent care centers, in-patient psychiatric treatment facilities, and residential treatment programs and other services for substance use disorder. “These facilities are absolutely critical to have a place to take individuals in crisis, other than emergency rooms, hospitals, and jail,” the DMH report states. “There is also a need to evaluate the efficiency, including length of stay,for each of the community based mental health and substance use resources that would support a reimagined alternative crisis response system.”

Supervisor Hahn’s motion would result in the hiring of a consultant to work with DMH and the Alternative Crisis Response Steering Committee to take a closer look at the county’s current crisis response framework and the gaps in that system, and to further flesh out recommendations for creating a new system. The motion calls for a report back to the board in 60 days.