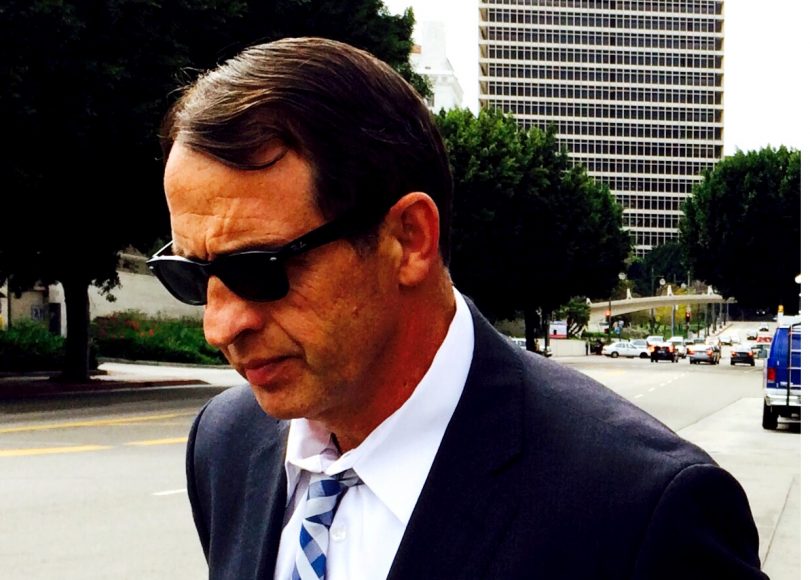 On Monday morning, William “Tom” Carey, 58, a former captain of the Los Angeles County Sheriff’s Department—and a genuinely crucial witness in the second trial of five-term former LA County sheriff Lee Baca—became the last of the department members charged with obstruction of justice to be sentenced.

U.S. District Court Judge Percy Anderson surprised most court watchers by giving Carey a sentence of nine months in a federal prison, and a year of probation when he gets out. Carey was also fined $3,000.

The nine-month sentence was a month under the ten months the prosecution had requested, and years less than the up to 60 months he could conceivably have received.

Carey—who was originally charged with obstruction of justice, conspiracy to obstruct justice, and perjury, for lying on the stand in three previous obstruction trials—pleaded guilty to the perjury charges in return for having the two obstruction charges dropped.

Carey also agreed to testify at the trial of former sheriff Lee Baca, and to be available to testify at former undersheriff Paul Tanaka’s trial, although in the end he wasn’t called by the prosecution for Tanaka’s proceedings, or for Baca’s first trial.

In the second trial of former sheriff Baca, however, Carey was called and, in his nearly two days of testimony, he made a measurable difference, according to the prosecution.

With all this in mind, the government asked Judge Anderson for a 10-month sentence for Carey.

Carey was, however, a part of the actions that produced the convictions of ten department members for obstruction of justice and conspiracy to obstruct justice. Among those convicted were the former sheriff, Lee Baca, and the man who believed he would be the sheriff after Baca, Paul Tanaka.

With the other defendants, Anderson handed down sentences that ranged from 18 months, at the low end, to five years, for Tanaka. And, in Baca’s case, the judge gave the former sheriff a full year more than the government had requested.

So what Anderson would do with Carey was considered to be anybody’s guess.

As most readers likely remember, the problems that led to all those obstruction of justice convictions began in August 2011, when the FBI had been investigating an increasing number of reports of brutality and corruption by deputies in the LA County jail system for nearly a year. But while the FBI agents had plenty of complaints from inmates that seemed credible, proving them was another matter. Deputies backed up each other’s stories. And, in general, members of law enforcement were more sympathetic in the eyes of jurors than inmates, even if the inmates were in the right.

So the feds decided to launch an undercover investigation using an inmate/informer named Anthony Brown. In the summer of 2011, Brown participated in a successful sting in which a deputy brought Brown a contraband cell phone in return for a cash bribe.

But then when the cell phone was discovered in a routine search, Brown’s identity as an FBI informant was blown, plus the existence of the undercover investigation came to light.

That is when the obstruction began.

In short order, a complicated plan was devised to hide Brown from his federal handlers. Attempts were made to persuade potential witnesses not to talk to the FBI. And a special agent of the FBI was falsely threatened with arrest—among other less-than-ideal activities.

According to the prosecution’s sentencing memo, however, the government viewed Carey “as being less culpable than many of the others”—others being the former LASD people who had already been convicted for their individual and collective parts in the obstruction scheme.

“First, [Paul] Tanaka was responsible for the [brutal and corrupt] culture in the jails and made statements about the FBI that stoked the flames in the Department,” the prosecutors wrote. “Second, although he was a lower-ranking official, [Former lieutenant Stephen] Leavins was reporting directly to Baca and Tanaka and [was] involved in some of the egregious witness tampering. Third, [former sergeant Scott] Craig and [Maricela] Long were not only involved in the witness tampering, but also made the outrageous statements to [Special Agent] Marx and [others].

The defense asked for a “custodial sentence” of not more than five months, with another five months of house arrest.

In addition to arguments about the importance of Carey’s 35 years of service to the LA County Sheriff’s Department, plus his cooperation with the prosecution, and the fact that he had admitted to a crime, Carey’s attorney, Andrew Stolper, described the fact that his client was caring for his ex-wife’s son because the boy’s father was dead, and his ex-wife, the boy’s mother—who is also a former department member—was gravely injured in a car wreck, which left her with “neurological issues.”

At first it appeared that Judge Anderson was going to take a hard view.

“He was a sworn officer of the law,” said Anderson, adopting his usual fierce tone. “And he came into a federal court and swore an oath to tell the truth. And then he lied.” More than once.

But then Anderson shifted gears. “A nine-month custodial sentence, and one year of supervised release will deter others….” he said.

“If it were not for the defendant’s cooperation,” and his years of service, the sentence would be “much more severe,” Anderson added with a glare, in case anyone thought he was temporarily going soft.

Anderson also spoke about Carey’s struggle as a single father to his ex-wife’s boy.

It was a more positive outcome than expected for Carey, who was the head of the Internal Criminal Investigative Bureau (ICIB) for the sheriff’s department, the unit that theoretically should have investigated the kind of criminal acts by department members that the FBI investigated for approximately six years, resulting in 21 convictions.

But the point was made. “Obedience to a criminal culture has serious consequences,” said Anderson.

Carey is expected to surrender to federal marshals on July 24.

POST SCRIPT: On Friday of last week, former LA County sheriff’s deputy Mickey Manzo—who was one of those ten department members convicted of obstruction charges—applied for a reduction of his 24-month prison sentence, based on what is known as the 1033 rule. Manzo too was an important witness in both of the Baca trials, and in the trial of Paul Tanaka.

Anderson reduced Manzo’s sentence to 14 months in prison, from the original 24.

While the reduction was good news, according to Manzo’s attorney, his client—who is now working for Home Depot—was just offered a promotion. Now, of course, he cannot receive it.

Manzo attempted to be good-natured when he heard the news. But, still, the reality of it was a blow.

Manzo may have been thinking of former LASD deputy James Sexton who, after cooperating with the feds, was released by Anderson in January of this year into six months of home detention followed by another six months of formal probation.

Yet, Sexton had already done four-and-a-half months in a string of federal prisons that turned out to be much harder time than anyone intended. (For more details on Sexton’s prison experience read our previous story here.)