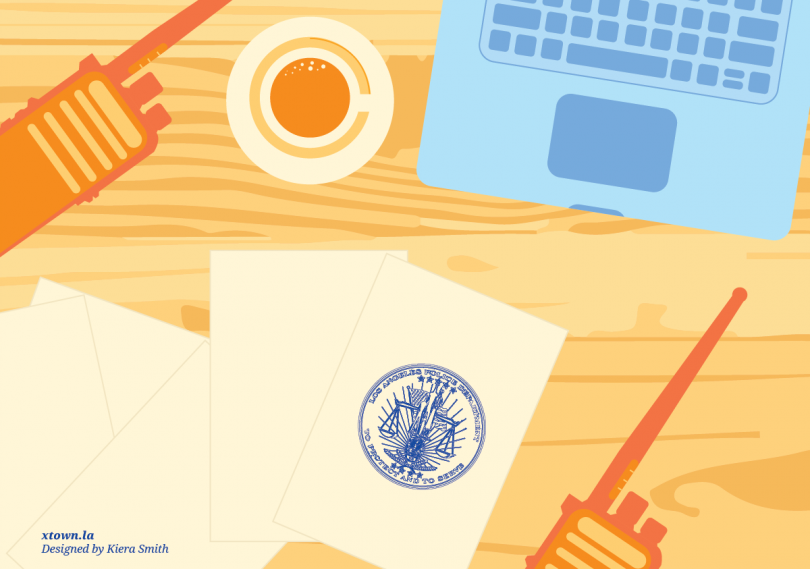 In 2015, then-Governor Jerry Brown signed a bill that removed the term “lynching” from California’s criminal code. So why is it still in the Los Angeles Police Department’s crime code manual?

Over the past four years, the LAPD filed 24 crime reports that included “lynching” or “attempted lynching,” even though state law had officially removed the term.

Most people understand the term lynching from a violent historical perspective of the killings of black people during the Jim Crow-era South. Merriam Webster defines lynching as a mob-led extrajudicial execution of a person – usually by hanging.  But the LAPD manual takes its definition from the now-removed language of the California penal code, which defined lynching as a mob removal of a person from under lawful custody of a peace officer.

The persistence of the word “lynching,” even after the passage of a state reform, shows how difficult it can be to scrub institutions of language that echoes an era of intolerance.

“This violent term was eliminated from criminal codes four years ago,” said State Sen. Holly Mitchell (D-Los Angeles), who authored SB 629, the bill Brown signed into law. “There is absolutely no excuse if the perverse use of this term is still being used today.”

The LAPD said they label crime reports based on the California Penal Code and are tracked based on the FBI’s Universal Crime Reporting guidelines.

Sgt. Barry Montgomery, an LAPD spokesperson, said the LAPD crime manual is a “living and breathing” document that is always being updated. “We try really hard to use language that is more modern while understanding the fact that people can take offense to the way things are written,” Montgomery said. “We need to be pushed a little bit so it’s brought to our attention.”

The LAPD has an ongoing process of strategic planning that outlines goals they want to achieve to make Los Angeles one of the safest big cities in America by 2020. Some of those goals include strengthening the public safety workforce, leveraging technology to improve performance and building community trust and collaboration, according to the LAPD’s strategic plan, “LAPD in 2020.”

Despite those goals, the LAPD’s Consolidated Crime Analysis Database, the manual it uses to describe suspects or victims of crime, is still peppered with terminology that implies bias.

The LAPD uses the crime code manual to file initial crime and arrest reports. Once the reports are complete, they are signed by the reporting officer, then approved by a watch commander. Record clerks then add the appropriate codes to distinguish characteristics of the suspect, the victim, their relationship or the crime itself.

If a sex worker is the victim of a crime, the LAPD will code it as “the target/victim was a prostitute.”

“‘Prostitute’ is antiquated language,” said Gina Bigham, director of the Trans Lounge at the LGBT Center in Hollywood. The Oxford English dictionary recorded the earliest use of “prostitute” as someone who sexually dishonors themselves in practicing sex work. The word “prostitute” has carried that association ever since. “Sex-worker” is now considered the more appropriate label.”

“The LAPD has shown a commitment to LGBTQ rights, but the language used is part of the work that needs to be done to bridge the gap,” said Bigham.

There were 689 reports in which a person engaged in sex work who was also the victim of a crime was labeled a prostitute from 2010 – 2019.

Until the manual was updated in September 2019, the LAPD continued to use a number of other terms in its official reports which are now generally considered inappropriate or even offensive, including “retarded,” “crippled” and “prostitute.”

In 2010, Congress passed Rosa’s Law, which eliminates all references to mental retardation in U.S. federal law. However, it wasn’t until last September that the LAPD updated its own manual to remove that term. Before then, the LAPD had a code to describe a victim as “mentally challenged/retarded/intellectually slow.”

Sandra Baker, a family support specialist at the Down Syndrome Association of Los Angeles, has a 21-year-old son with Down syndrome. She said “retarded” is still a widely used term and there needs to be more training for police to learn about different disabilities since they are members of the community people should be looking up to.

“It would be very hurtful if my son were the victim of a crime and they used that term to describe him,” said Baker. “Officers may not understand how your loved one is impacted by that.”

There were 706 reports in which a victim was described as “mentally challenged/retarded/intellectually slow” in LAPD crime reports from 2010 – 2019.

Until this past September, the LAPD used the word “crippled” in its manual.

Hawken Miller, a reporter who covers health news, lives with Duchenne Muscular Dystrophy, a severe type of muscular dystrophy that leaves most unable to walk by the age of 12. Miller uses an electric power chair to get around, as his disease makes walking difficult.

Miller said he’s grateful he’s never encountered someone who used the term “crippled” to describe him and doesn’t think such a derogatory word should be used ever.

“‘Person with a disability’ works for me,” said Miller.

Additionally, there’s an entire list of codes to describe different people suspects can “impersonate” while committing a crime, including “God” and “Satan,” and a “crippled” person.

Diane Smith Howard, the managing attorney for Juvenile and Criminal Justice with the National Disability Rights Network, agreed with Miller. She said it’s important to remember the power of language in shaping attitudes and perceptions and that “impersonating” is offensive and inaccurate.

“Circumstances in which a person would fraudulently misrepresent disability status are so rare that it does not make sense to even include this in the manual,” said Howard.

Prior to the September manual edits, the LAPD included the term “hermaphrodite,” which implies a person physiologically both fully male and female. The term was used to describe a victim of a crime even though being anatomically both male and female is impossible, according to the Intersex Society of North America.

“The term ‘hermaphrodite’ is outdated and offensive when used to describe individuals born with variations in genitalia or other sex traits,” said Hans Lindahl, communications director for InterACT, an advocacy group for intersex youth.

“This is a harmful term that is still used in medical literature, and in medical records today,” said Lindahl. “It perpetuates damaging myths about what is really possible for humans anatomically, and is based on a history of intersex differences’ being branded as unnatural or even monstrous.”

The California Department of Justice maintains a list of offenses based on existing statutes under state law. Agencies are encouraged to utilize this list to improve the general quality and usability of data across state and federal jurisdictions. The problem is not all agencies use the list of offenses they provide, and many agencies have their own locally maintained versions of offenses.

The state’s list of offenses still includes the term “lynching,” referring to crimes labeled as such prior to the change in California law. Local agencies like the LAPD are not encouraged to apply the code for “lynching” to crimes that occurred after 2015.

Attempts to clarify who is responsible for changing outdated crime code classifications yielded a variety of answers from the LAPD’s public information office. Depending on whom you ask, the responsibility could lie with individual divisions, or even the city attorney.

A Data Integrity Unit was established by the LAPD in 2014 to provide training and offer guidance to those coding crime reports so crime statistics are accurate.

Requests for comment about the specific language used in the manual and the opportunity to speak with the Data Integrity Unit, responsible for overseeing how reports are coded, were declined.

This story by Ethan Ward originally appeared on Crosstown, a non-profit news organization that uses data on crime, traffic and air quality to tell stories about Los Angeles.

How Crosstown did it: We examined LAPD publicly available data and the LAPD Consolidated Crime Analysis Database for 2019.

LAPD data only reflect crimes that are reported to the department, not how many crimes actually occurred. In making our calculations, we rely on the data the LAPD makes publicly available. On occasion, LAPD may update past crime reports with new information, or recategorize past reports. Those revised reports do not always automatically become part of the public database.

Want to know how your neighborhood fares? Or simply just interested in our data? Email Crosstown at askus@xtown.la.