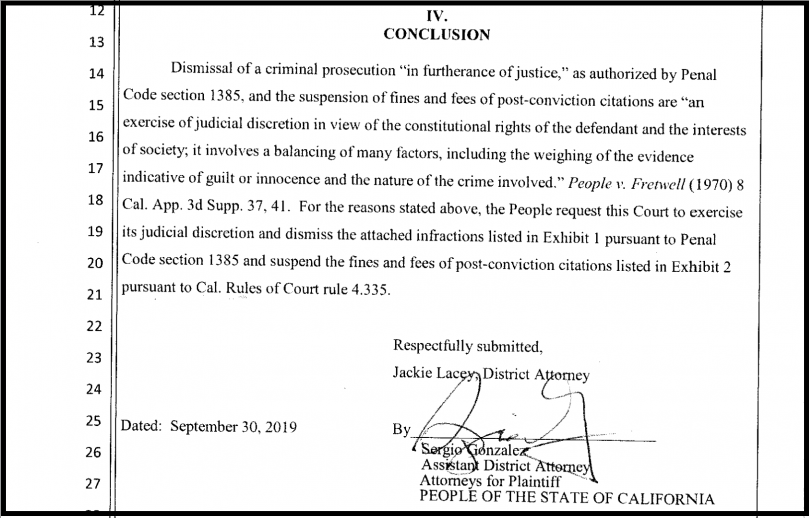 Feuer and Lacey have asked the Los Angeles Superior Court to get rid of 398,000 warrants, 1,700,000 pending citations for infractions more than five years old (and dating back to 1981), and any fines and fees associated with those infractions. More than half of the citations are over 10 years old.

These cases “clog the system with little or no countervailing benefit,” Feuer wrote in his motion to “recall and quash” the infractions, warrants, and related debts.

The initiative is intended to take some pressure off of homeless individuals ticketed for offenses related to their houseless status.

Additionally, according to Feuer, dumping the old cases would open up a path for crime victims and witnesses who might otherwise “be reluctant to reach out to law enforcement for fear of further penalties for these unresolved cases.”

The initiative would also allow people whose licenses had been suspended after failing to appear in court on even minor traffic ticket cases to regain their licenses and car insurance, thus improving road safety, and eliminating a barrier to employment that often traps people in poverty.

In her motion to the court, DA Lacey notes that the California Court of Appeal, in People v. Duenas, highlighted the fact that minor offenses can still “lead to a loss of employment or shelter, compounding interest, yet more legal action, and an ever-expanding financial burden.”

By “unclogging” the court system, the mass record-clearing will allow the City Attorney and the LAPD to focus on their new “Fugitive Misdemeanant Recovery Program.”

Instead of going after “individuals who have not had contact with law enforcement for more than half a decade and whose only offense was a low-level, non-violent crime and failure to appear in court,” said Los Angeles Police Chief Michel Moore, the LAPD will “focus precious resources pursuing those committing violence in neighborhoods throughout Los Angeles.”

The program, which has been in effect for a little over a month, has resulted in the capture of seven people who “willfully failed” to meet their court dates for more serious misdemeanor crimes that include domestic violence, child abuse, weapons-related offenses, as well as gang-related vandalism, according to the law enforcement leaders.