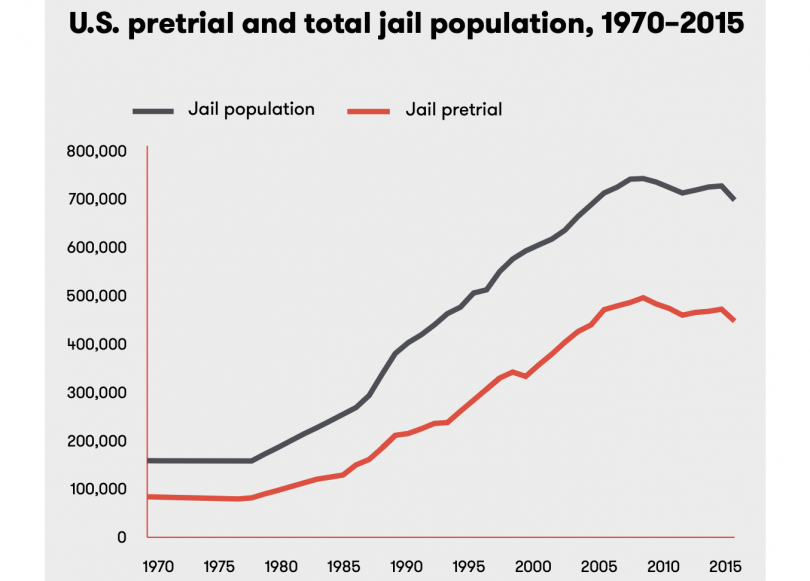 Approximately two-thirds of the more than 740,000 people locked up in local jails nation-wide have not been convicted of a crime, but are being held pre-trial, a new report by the Vera Institute of Justice reveals.

The population of people held in jail without having been convicted of any crime increased by 433 percent from 1970 to 2015–from 83,000 people to more than 440,000. Much of that jump, according to the report, is traced back to a rise in the use of cash bail.

Over two decades, between 1990 and 2009, the bail bond industry rose to power as pretrial releases involving financial conditions in felony cases in the nation’s largest urban counties increased from 37 percent to 61 percent.

Between May 2016 and May 2017, for example, defendants in Los Angeles County paid approximately $173 million in non-refundable cash to bail bondsmen, and $13.6 million directly to the courts, according to a report commissioned by California Chief Justice Tani Cantil-Sakauye, who has stood at the forefront of the cash bail reform movement in CA.

“Historically, the purpose of bail was to facilitate the release of people from jail pending trial, with conditions set to ensure their appearance in court,” the Vera report states. “Over time, however, those conditions have shifted away from no requirement that money be paid—or a requirement that money be paid only when people failed to appear in court—to upfront payment of cash bail and bail bonds issued by for-profit companies.”

This exponential growth has occurred just as crime rates and even arrest rates have been declining over the last 20 years, and in spite of a U.S. Supreme Court case in which the justices declared that pretrial incarceration should be used sparingly, as the “carefully limited exception,” to the “norm” of pretrial release.

A growing body of research suggests that the practice of holding people behind bars as they await trial leads to worse outcomes for those pretrial individuals than for their peers who are able to make bail or who are released on their own recognizance.

“Members of the poorest communities are harmed most profoundly, despite constitutional prohibitions on punishing people for their poverty,” says the report.

And there’s little evidence that the cash bail system, which is supposed to increase both public safety and court appearances, has any serious benefit to the justice system.

Moreover, people who are incarcerated while they await trial are more likely to be convicted, and more likely to receive longer sentences than their peers who secure their release with a bail bond or who are released without financial conditions, even controlling for various factors that make cases different. Additionally, spending even just a few days in jail after an arrest can have severely negative impacts on peoples’ lives, putting their employment and housing in jeopardy, and increasing the likelihood that people will be arrested and convicted of a different crime at a later date.

Pretrial detention’s threats to livelihood make people more likely to plead guilty, even if they have a strong defense or are not guilty of a crime at all.

The problem is especially pronounced in cases involving low-level crimes for which a guilty plea with a “time served” sentence can free a person from lockup, so that they can go back to work and take care of their families.

“While more rigorous research is needed to unpack the connection between pretrial detention and these outcomes, studies demonstrate that the current model of pretrial justice, which centers on the ability to pay monetary bail, is failing to deliver its anticipated results,” the report concludes. “Moreover, pretrial risk assessment instruments may not be the panacea they were once believed to be. Given this evidence, it is urgent that communities adopt more effective and just methods to guarantee pretrial success and rigorously assess whether those methods are achieving their intended impact.”

The report suggests courts engage in “meaningful bail hearings” that consider a person’s ability to post their bail, rather than the usual “perfunctory” hearings that last mere minutes, often conducted without defense attorneys present.

Finally, the report suggests courts employ “unsecured bonds,” which don’t require defendants to pay any money unless they actually fail to appear in court.