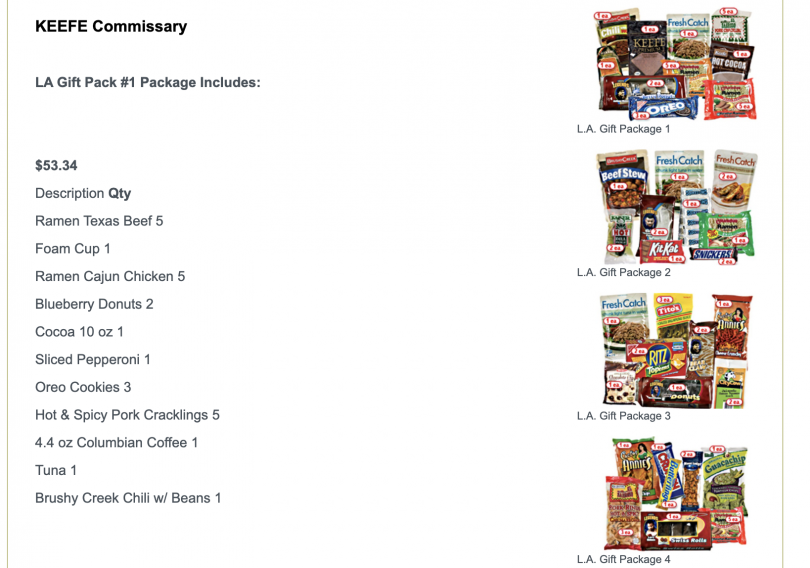 In 2019, California Governor Gavin Newsom vetoed a bill by then-Senator Holly Mitchell that would have significantly reduced the power of local sheriff and probation officials and vendors to profit from exorbitant commissary and phone call mark-ups in jails and juvenile lockups.

This week, Mitchell’s colleague on the LA County Board of Supervisors, Hilda Solis, has brought a local motion before the board addressing the issue of overcharging incarcerated people and their families for goods and services. The board members unanimously agreed to explore options for bringing free phone calls and reduced commissary prices to LA’s lockups.

Mitchell’s vetoed SB 555 would have prohibited local law enforcement officials from selling commissary items for more than 10 percent above the cost paid to the vendor. The bill also would have capped jail phone call and video call rates at $.05 and $.25 per minute respectively. Certain fees for money transfers and other financial transactions would also have been eliminated.

(Newsom, in his veto, said he was concerned that the bill’s requirement that telephone and communication service contracts be “negotiated and awarded to the lowest cost provider” could unintentionally eliminate important rehabilitation and education programs.)

Still the issue of burdening incarcerated Angelenos — including kids in juvenile halls and camps – and their families with steep phone call rates and unnecessary markups on food and other essentials sold through the commissary remains an issue in Los Angeles (and across the nation).

And it is an issue that, like every aspect of the justice system, disproportionately impacts low income communities and people of color. In LA County, 80% of people in jail, and over 90% of youth in camps and halls are Black and Latinx.

In 2020, people in the jail system, unable to see their loved ones through the pandemic, made more than a million phone calls. Overall, adults in LA County’s lockups spent 20 million more minutes calling family and friends than during any of the three preceding years, Supervisor Solis noted in her motion. Each of those minutes cost families twenty-five cents. The calls generated more than $20 million in revenue for Public Communications Services, Inc., LA’s jail phone contractor.

“Phone calls in County jails, juvenile camps and halls are so expensive that families are spending hundreds of dollars a month to connect with their loved ones,” said Jared O’Brien of the Youth Justice Coalition. “Phone calls are one of the few humanizing lifelines for incarcerated people: when people are locked away from society, maintaining access to their loved ones is critical, and losing access to them is isolating and detrimental to the well-being of both the incarcerated person and their loved ones.”

“Though the LA County Sheriff’s Department was able to secure, in May 2020,” Solis wrote, “one free, five minute COVID-19 courtesy call per incarcerated person a week with PCS, this is, unfortunately, not sufficient for someone who hasn’t seen their family or friends in over a year.”

“Though PCS provides a $15 million annual guarantee to go toward the Inmate Welfare Fund (IWF) and $59,000 to the Juvenile Institution Services Budget (JIS), the idea of profiting off families who have been hit the hardest during COVID-19 and have been trying to survive pre-pandemic doesn’t seem fair, equitable, or moral,” the motion states.

Commissary markups on items that include clothing, deodorant, soap, toothpaste, and other hygiene items, as well as snacks, soups, and other food items to supplement incarcerated people’s meals, are in some cases more than 60 percent higher than an item’s cost to the sheriff’s department.

Additionally, the Inmate Welfare Fund, into which some commissary and phone call profits are deposited, is an “opaque” system that could use better data analysis and oversight, according to Solis’s motion.

Thus, the motion calls on the LA County CEO to work with the LASD, the Office of Inspector General, and other departments to return to the board in 90 days with a report on ways the county could offer free phone calls to people in jails and probation halls and camps, as well as at-cost commissary prices.

The motion also seeks an itemized statement of how the sheriff’s department is spending money from the Inmate Welfare Fund.

The board received 205 pages of public comment supporting the motion in advance of the board meeting.

“I am appalled at the abusive practice of overcharging people who have no
resources and no choice when communicating with family and lawyers,” Maria Elena Rodriguez wrote. “The exorbitant fees charged for phone calls are obscene. The fact that the state has been complicit in this financial exploitation is completely unconscionable. Please reform this injustice. Award a contract to the vendor who will provide phone calls for free and no mark-up in commissary items.”

The motion, Supervisor Solis said, is a “first step” toward offering some financial relief to families “at a time when financial assets are strained; in addition to strengthening oversight of how the profits and revenues have been used.”