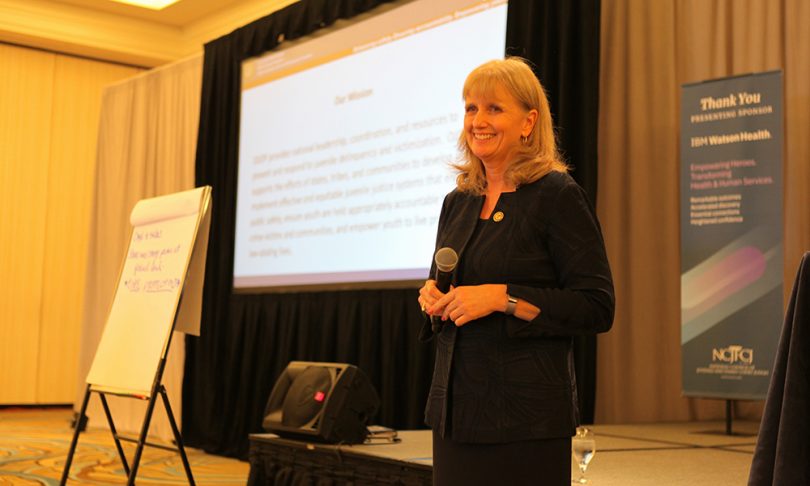 A session at the National Council of Juvenile and Family Court Judges’ annual conference, held in San Diego this week, was billed as a chance for attendees to ask questions of Caren Harp, the new head of the Office of Juvenile Justice and Delinquency Prevention (OJJDP).

But Harp, who was appointed in December, turned it into a listening session, asking the audience of mostly judges and attorneys to tell her what’s working in their jurisdictions and how OJJDP might help them continue that work.

“What do you need from us?” Harp asked, standing in front of a flip board propped on an easel, marker in hand. “That’s why I’m here to talk to you.”

Harp, a former public defender and prosecutor who was teaching law at Liberty University in Lynchburg, Virginia when she was tapped for the OJJDP position, said she’d held similar listening sessions with her staff. Those sessions led to new vision and mission statements and a new motto for OJJDP: “Enhancing safety. Ensuring accountability. Empowering youth.”

Harp said she had wanted a motto that underscored the fact that there are multiple stakeholders — victims, offenders and communities — in the juvenile justice system who deserve equal attention.

“Sometimes the justice system can drift too far from one side to the other,” she told the audience.

Attendees asked her to prioritize restorative justice programs (“Something very near and dear to my heart,” she told them, and “key to public safety”), commit to funding tribal youth programs and restart meetings of the Federal Advisory Committee on Juvenile Justice and the Coordinating Council on Juvenile Justice, neither of which have met for 18 months. Harp said her hope is to hold meetings in early summer and again before the end of the year.

“We’re going to get them up and running again,” she promised.

In response to a question about OJJDP taking a leadership role when it comes to reinvesting money saved by the decline in youth incarceration, Harp said, “It’s on my list.”

After the session, Harp sat down to answer some additional questions about her vision and priorities for OJJDP.

Kelly Davis: What’s a key change you’d like to see happen in the juvenile justice system?

Davis: Do you feel the system has shifted too far toward one side?

Harp: It drifted a bit to a focus on avoiding arrests at all costs and therapeutic intervention. It went a little too far to the side of providing services without thinking of short-term safety.

Davis: Why do you think that shift happened?

Harp: I don’t really know the reason for that shift. Usually it’s some anomalous event or a bad outcome and a response to that — an overcorrection. But if we stay in a balanced place, then when the anomalous bad thing happens, the system is considering all the right things and is stable enough to respond appropriately.

Too early to draw conclusions about neuroscience and juvenile justice

Davis: You’ve written that it’s still too early to draw conclusions about neuroimaging and neuroscience with regards to juvenile justice. What would you need to see to convince you that the science is sound?

Harp: I would have to see the scientists — the actual scientists engaging in the neuroimaging and the behavioral science — on the witness stand being questioned and seeing if their science meets the minimum standard for admissibility in a court of law. … This information has been disseminated through publications and at trainings like this [conference], and it’s just become accepted as fact without undergoing the admissibility process in a court of law. It has managed to skip over that.

Davis: There was a lot of focus at this conference on fines and fees in the juvenile court system. [On Saturday, NCJFCJ’s board of directors passed a resolution encouraging juvenile courts to work toward “reducing and eliminating fines, fees, and costs.”] In late December, Attorney General Jeff Sessions rescinded an Obama administration advisory on juvenile court fines and fees. Can you comment on that decision?

Harp: I support the attorney general’s decision to do that. States should be able to control their own court systems.

Davis: You said you planned to restart the two advisory committees. Do you see yourself doing more of the kinds of listening sessions you held at this conference?

Harp: Yes. Maybe it’s because I come to this office after many years as a practitioner, but I think it’s critical that our work be informed by, and be responsive to, the needs of the field. Getting practitioners out of court and around the table to share their successes, and their challenges, is the best way to guide our research, training and technical assistance efforts.

This interview first appeared in the Juvenile Justice Information Exchange