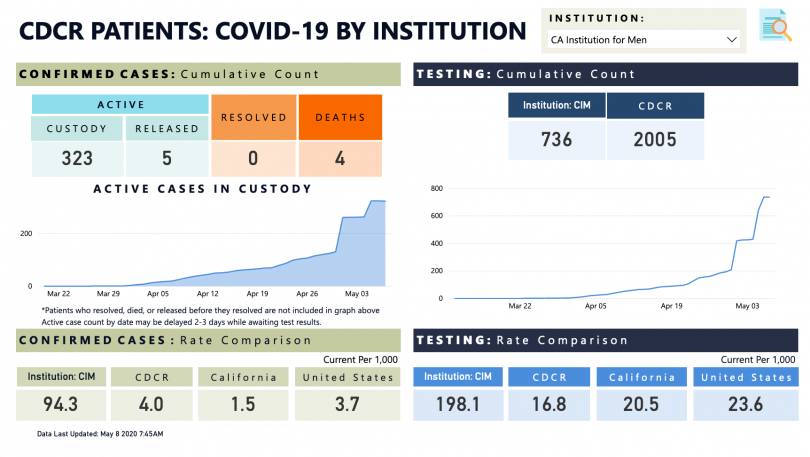 As of Saturday, May 9, five men incarcerated at the California Institution for Men (CIM) in Chino have died of COVID-19. Three of the men died at outside hospitals on Wednesday, Thursday, and Saturday, as coronavirus numbers surged within the prison. (The California Department of Corrections and Rehabilitation announced the first death on Sunday, April 19.)

On Friday, May 1, 114 prisoners and 42 employees in CIM had tested positive for the virus. By the morning of May 8, the number of cases among the incarcerated population had nearly tripled to 332 men. The number of staff cases increased by 6 during that time — to 48, with 19 having been able to return to work after recovering from the virus.

The CDCR has said that the quick jumps in case numbers are the result of the department gaining the supplies needed to increase testing volume.

The department has tested 2005 incarcerated men and women, 736 of whom have been held at CIM.

The CDCR has been shuffling prisoners around inside CIM and at other prisons, with the goal of increasing social distancing, sometimes even mixing dorms that were previously separated, as they expand into gyms and other makeshift housing, WitnessLA has heard from prisoners and their loved ones.

The department has also transferred prisoners to different facilities with the same goal of spreading out the prison population.

Attorney Michael Bien of Rosen Bien Galvan & Grunfeld, a firm representing mentally ill prisoners in a lawsuit against the state, said he believed both strategies to be detrimental to the goal of stopping the spread of COVID-19.

“I personally think that … putting prisoners on buses and shipping them all over the state is much more likely to spread COVID-19 than it is to stop it,” Bien told WLA. Moreover, spreading people out of the dorms into gyms made up of smaller 8-person pods “is a meaningless, medically bankrupt policy,” he said.

Bien and other criminal justice experts say “social distancing” is an impossibility behind bars, and the state must release more prisoners. “We think there are tremendous numbers of people incarcerated in California prisons who are safe and appropriate for release,” said Bien. Many are within months of release anyway, many have proven their rehabilitation during their years in prison, and many are elderly and/or ill, and thus at far higher risk of dying if they contract the virus.

Indeed, many of the families of incarcerated people WLA has talked to this week say their loved ones are medically vulnerable and were locked up for non-violent crimes mdash; offenses that should not sentence them to die of a virus in prison.

We’ll have more on this over the next week, so check back.

This story was updated to include information on the fifth death, on Saturday, May 9.