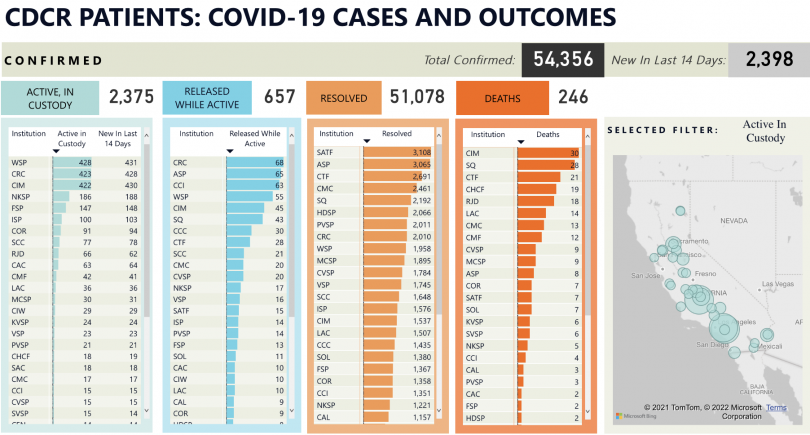 In the last few weeks, Americans have watched COVID numbers rise alarmingly as the Omicron variant took hold over the recent holidays.

At the same time, inside California’s prisons the number of new COVID cases recorded in the last 14 days has spiked alarmingly — and then spiked again.

At the end of last week, the new COVID cases among residents of the 33 adult facilities run by California Department of Corrections and Rehabilitation (CDCR) hit a total 1585 new cases.

Then on Monday, January 10, there were 2375 new cases of COVID among those incarcerated in the CDCR’s lock-ups.

Out of Monday’s 2375 cases, 1625 of those incarcerated people who tested positive resided in five of the system’s prisons.

The five with the worst spikes were Wasco State Prison Reception Center (WSP) with 431 new cases, California Rehabilitation Center (CRC) with 428, California Institute for Men (CIM) with 430 new cases, which jumped from Saturday’s number of 340 infected residents at CIM.

CIM is also the institution with the highest number of COVID deaths of any of the state’s prisons since the pandemic began.

Rounding out the five facilities with the worst spikes on Monday were North Kern State Prison (NKSP) with 188 new cases, and Folsom State Prison (FSP) with 148, infected residents, an 83 percent jump from 81 residents testing positive over the weekend.

And then on Wednesday, January 12, the spike in the facilities kept rising.

At historic Folsom State Prison the cases more than doubled, from 148 infected residents to 311.

The COVID numbers among employees who work in the state’s prison facilities also appear to be spiking, although it is difficult to quantify exactly, as those numbers are self-reported. Yet when it comes to the facilities with the new high numbers listed above, the self-reported stats, while likely low, are still a large cause for concern for family members of those men and women serving sentences, along with the family of the staff members affected.

As of January 7, staff working in the California Rehabilitation Center (CRC) have reported 129 new cases of COVID. The California Institution for Men (CIM) has 167, Wasco State Prison (WSP) 105, and North Kern State Prison (NKSP) has 98.

It is also important to note that the two prisons, which hold some of the system’s most physically vulnerable residents, are having their own spikes among employees, with California Health Care Facility (CHCF) showing 192 workers testing positive, and California Medical Facility (CMF) with 113.

Those with family members in the state prison system say they are worried and furious as they track this newest round of COVID spikes.

“Can SOMEONE get help?” tweeted prison reform activist and mother of an incarcerated son, Allison Villegas. “These institutions are imploding with sickness.”

This past Friday, in the hope of coping with the surge in cases, the CDCR announced that, as of Saturday Jan 8, 2022, all family visits would be halted.

While the halt in family visits is certainly sensible given the alarming rise in new cases, family members and justice advocates point out that family visitors are required to be fully vaccinated, or have proof of a negative test, in contrast to staff members, who are still not required to be vaccinated at all to work in the state’s prison facilities—both the adult and youth facilities—due to the ongoing legal challenges made by the powerful prison guards’ union, the California Correctional Peace Officers Association.http://www.ccpoa.org

To date, the CCPOA has succeeded in preventing any kind of vaccine requirements for staff—which otherwise would have kicked in this month—by challenging the mandate in appellate court, thus delaying any decision on the matter until March 2022.

To their credit, the CCPOA has strongly urged their members to get vaccinated, pointing to the fact that. since August 1, 2021, “18 active duty California Correctional Peace Officers have died from COVID” for a total of 36 dead since the pandemic began.

Unfortunately, it appears that a significant percentage are not listening.

Late last month, WitnessLA wrote about the fact that, despite the lack of vaccine mandates for 31 of the state’s prisons, when it comes to the CDCR’s two main adult medical facilities—the California Medical Facility (CMF) and the California Healthcare Facility (CHCF)—California’s Public Health Officer & Director Tomás J. Aragón issued an August 19, 2021 order requiring all California prison staff who work in these healthcare settings (paid and unpaid, state and contracted) to be fully vaccinated against COVID-19 by October 14, 2021. Then on December 22, 2021, Aragón updated his order with a new mandate requiring boosters.

According to a recent court filing. however, a large slice of the contract staff at both medical facilities are ignoring the state health officer’s orders and doing so with zero consequences.

As so it is that, as of today, at the California Medical Facility (CMF), according to the self-reported numbers, there are 146 staff members testing positive.

And the spikes continue.