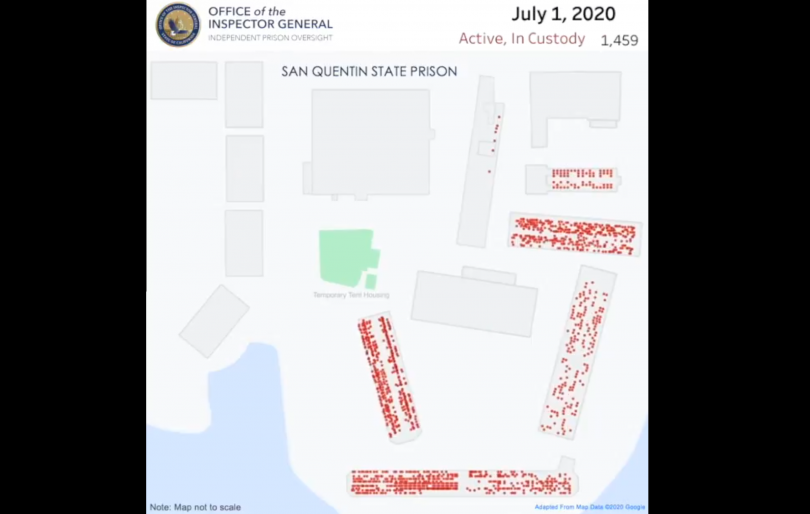 California’s Occupational Safety and Health Administration (Cal/OSHA) fined San Quentin State Prison $421,880 — a record-breaking sum – by over substandard employee safety conditions related to its handling of the coronavirus, which raged through the prison last summer.

During the first week of June 2020, COVID-19 was imported to San Quentin when the state moved more than 100 people, a large percentage of them of already infected from the California Institution for Men (CIM), which, at the time, had the state’s worst COVID outbreak.

Shortly thereafter, San Quentin suffered an outbreak of COVID-19 that, over a period of weeks, would eventually infect approximately 75 percent of the residents of the prison, and dozens of staff.

Three months, and multiple deaths later, on October 20, a three-judge panel of a California Appeals Court issued a 43–page ruling ordering the state to release or transfer approximately 50 percent of SQ’s residents — in order to bring the population down to “no more than 1,775 inmates” and create enough space for physical distancing. The COVID-19 outbreak at San Quentin was “the worst epidemiological disaster in California correctional history,” the judges wrote, in case anyone missed the point.

After that first major San Quentin outbreak, the virus has slammed its way through many of the state’s other prisons, infecting more than 48,000 incarcerated people.

As of February 5, COVID-19 outbreaks have killed 200 prisoners and 25 workers across the state.

This week, the California Office of Inspector General issued a blistering report blaming the outbreak that swept through San Quentin State Prison over the summer on major missteps by the California Department of Corrections and Rehabilitation and its health care officials.

Along with this report on the CDCR’s “public health disaster,” the OIG created and then tweeted a timelapse showing how rapidly the virus flooded the prison complex.

We created a time lapse showing how quickly the virus spread at San Quentin State Prison between June 1, 2020 and August 31, 2020, after patients from CIM arrived at the prison. 28 incarcerated persons and 1 staff member died during this 3-month period. 2/3 pic.twitter.com/4tYI2SACvA

Cal/OSHA’s report detailing conditions that allowed the virus to spread through San Quentin faulted prison officials for failing to ensure that all custody staff exposed to the virus had fluid-resistant personal protective equipment (PPE), and failing to isolate prisoners and workers who had tested positive for the virus.

The report also documents multiple instances of inspectors seeing employees and incarcerated people without face coverings, getting haircuts, in the employee gym, on the exercise yard, and in other areas of the prison.

Additionally, imprisoned people were taken from infected tiers and mixed with people from non-infected tiers in the exercise yard, and people with suspected and confirmed cases of coronavirus were moved between housing units.

One of the largest fineable offenses Cal/OSHA uncovered, categorized as “willful-serious,” and carrying a $90,000 fine, featured a laundry list of ways in which the prison failed to “establish, implement, and maintain an effective” Aerosol Transmissible Disease (in other words, COVID-19) “exposure control plan.”

The CDCR’s virus screening procedures were “ineffective” at minimizing exposure to the virus, according to the report. Specifically, staff members were allowed to finish their work shifts after testing positive for the virus. Staff were also allowed to get around being screened for COVID-19 by working in the administrative building, gun towers, and wall gun posts. The department also failed to investigate absentee employees for possible COVID infections.