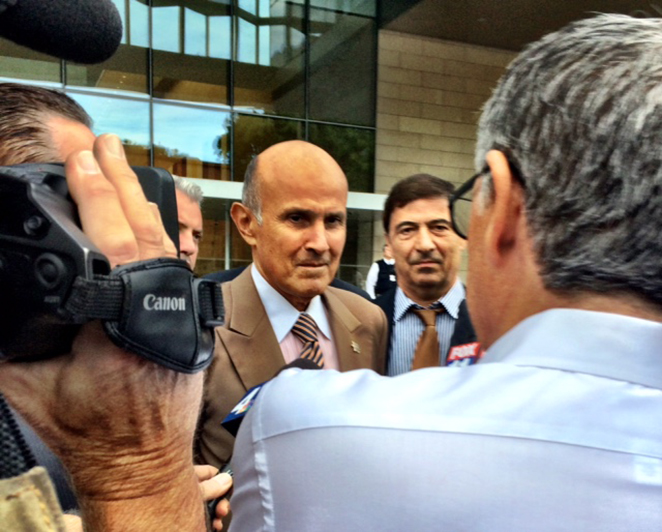 The jury in the trial of former Los Angeles County sheriff Lee Baca entered its third day of deliberation on Wednesday. Jurors began deliberating around 12:45 pm Monday afternoon after attorneys for the prosecution and the defense delivered around four hours worth of closing arguments on Monday.

On Tuesday, the day began with the jurors sending the judge a series of notes. First they asked for copies of the government’s indictment against Baca. Then they wanted to see the video showing former LASD sergeants Scott Craig and Maricella Long, as they cornered FBI Special Agent Leah Marx Tanner outside her home, and threatened her—falsely—with arrest.

(It is assuredly a video that bears viewing more than simply once.)

Jurors were extremely attentive as they watched the video, and heard the Faturechi read-back, in which the sheriff admitted that he did direct the sergeants to approach Leah Marx, according to Faturechi. Yet, he also dismissed any suggestion that the approach was meant to intimidate the federal agent. The government had done far worse in the way of intimidation in their efforts “to flip” former deputy Gilbert Michel, Faturechi said Baca told him, referring to the FBIs efforts to convert Michel into an informan. Michel, if you remember, is the jail deputy who took a bribe to bring the now infamous contraband cell phone to jail inmate/federal informant Anthony Brown.

Interestingly, after Anderson’s reply to their question, the jurors said they no longer needed either the Manzo and Rhambo readback.

Meanwhile, everyone else—-the two teams of attorneys, and the defendant, Mr. Baca, along with his wife, and a couple of friends—waited.

Each day the former sheriff has been remarkably calm and philosophic. He said he’s running every morning before court, which helps, he said.
Now on the morning of Day 3 of deliberation, few are willing to hazard a guess as to which way the jury is leaning.

While we wait for the jury, in brief, here are the dueling views that the jurors are examining:

At one time Lee Baca was arguably the most popular elected official in the state of California, save maybe Jerry Brown.

On Monday, however, at age 74, Baca sat at the defendant’s table in federal court, a kaleidoscope of expressions playing over his face, as he listened first to a government prosecutor, and then to his own defense attorney, tell very different stories about the events that could send him to federal prison, or allow him to dodge that bullet and go on with his life.

“An abuse of power in order to obstruct justice,” began lead prosecutor Brandon Fox in his 90-minute summation of more than two-weeks of testimony about the actions of the man who led the nation’s largest sheriff’s department for more than fifteen years. “An abuse of the power given him by the people of Los Angeles County….”

“He was the G-D Sheriff,” said Fox, quoting from Baca’s reported angry outburst during a meeting with then-U.S. Attorney Andre Birotte, and Steve Martinez, then the head of the Los Angeles office of the Federal Bureau of Investigation. “These were his G-D jails and he was going to do whatever it took to keep other law enforcement out of those jails….” said Fox.

According to the government, when the former sheriff learned that the FBI was investigating “his jails,” behind his back, Baca and his co-conspirators hid a federal informant, threatened an FBI agent, told potential federal witnesses not to cooperat with the FBI and that if they received grand jury subpoenas, those subpoenas would be “b. s.”

The jury has listened to recordings of this witness tampering, so the fact that former sergeants Long and Craig and former lieutenant Steve Leavins participated in ordering at least one witness not to cooperate with the FBI is not up for dispute. But those who did the tampering are alleged co-conspirators who have already been convicted of obstruction charges. What is in question is whether or not Baca bears responsibility for these and other acts.

The fact that Baca did not run the entire show himself didn’t matter, according to the government. When, Paul Tanaka, “the second highest ranking person in the sheriff’s department” learned about the FBI’s undercover investigation into wrongdoing in the jails, said Fox, his response in front of a roomful of department members was “Fuck the FBI!”

“And this was the man” whom Baca put in charge, Fox said. “Baca handpicked Tanaka, and went around others to give him power.” Paul Tanaka “mirrored” Lee Baca’s feelings, according to former assistant sheriff Cecil Rhambo, who was a witness for both the prosecution and the defense.

The former sheriff’s former assistant testified that Baca met with Paul Tanaka approximately five times a day during the crucial six weeks in which the alleged obstruction took place. Alleged co-conspirators Tom Carey, Greg Thompson, Steve Leavins (all of whom have either been convicted or, in the case of Carey, taken a deal), met approximately four to six times a week in closed-door sessions.

“The chain of command was broken.”

And then there was the pattern of calls, which the prosecution had introduced in earlier testimony in spreadsheet form, pointing out the flurry of telephone calls that occurred within a small time frame each time there was an event of note—-the discovery that the contraband cell phone belonged to the FBI, the fact that FBI agents got in to interview federal informant Anthony Brown, when Tanaka and, according to the prosecution, Baca, had ordered they be kept away, the arrival of a federal writ asking for Brown to be turned over for grand jury testimony, the news that former deputy Gilbert Michel was confessing to having beat up several inmates, along with other deputies, and so on.

Fox pointed to events that he said showed Baca’s attitude toward the FBI investigation, such as Baca’s September 26, appearance on Good Day LA, where he admitted he resented the FBI’s investigation. “Oh, yeah, no doubt about it. The FBI committed a crime,” he said on camera.

The Good Day LA reporter followed up: “If you don’t want the FBI to investigate, who polices the Los Angeles Sheriff’s Department?

“We police ourselves,” Baca replied.

Fox pointed to Cecil Rambo’s testimony about warning Baca that threatening FBI agent Leah Marx would be considered obstruction. “Don’t do that,” Fox said quoting Rhambo. “But he did it anyway, said the prosecutor turning to speak directly to the jury. Baca admitted to both Andre Birotte and to Robert Faturechi that he knew about the two deputies threatening Leah Marx, said Fox.

This was Mr. Baca’s conspiracy,” concluded Fox. “He brought in” all his coconspirators “to conduct it.”

BUT IS THERE REASONABLE DOUBT?

According to the defense, represented for closing arguments by defense attorney Nathan Hochman, there is no case.

The situation is a matter of two younger brothers—brothers in arms—“involved in a pushing and shoving match,” Hochman told the jury.

For six weeks, Sheriff Baca tried to get information from head of the FBI in Los Angeles, Steve Martinez, “who the went behind his back” and brought a dangerous piece of contraband to “a violent and dangerous inmate,” said Hochman.

But for those same six weeks Baca could get no answers from the feds. All the sheriff was focused on “was the safety of the jails.”

Sheriff Baca “did not conspire, did not” obstruct. “He was not the driving force, the leader, the heartbeat,” as the prosecution called him.

“Paul Tanaka was and he’s not on trial today.”

What is also not on trial, said Hochman, is deputies beating inmates, the writing of false reports by deputies, and excessive force by deputies. “Deputies who beat up inmates should be punished.”

Hochman noted some of Baca’s attempts to remedy problems in the jails, such as the LASD’s participation in revising the inmate complaint policy, and his hiring of a now retired commander Paul Pietrantoni to give courses to deputies on how to control problematic inmate behavior without excessive force.

The former sheriff’s only agenda, said Hochman, was “to keep inmate Anthony Brown safe,” once it was discovered that he was an FBI informant, and to investigate the issue of the contraband cell phone, and “determine how big a problem he has.”

Sheriff Baca was out of the loop, said Hochman. It was Paul Tanaka who was the head of any conspiracy.. “How do we know…?” Hochman asked. “Paul Tanaka was the thrower of F-bombs” when the FBI was mentioned. Paul Tanaka talked about “keeping the sheriff in the dark.” Paul Tanaka was in charge of moving Anthony Brown and repeatedly changing his name to obscure his presence in the county jail system. He was in charge of telling deputies not to cooperate with the feds. He was the one who called for sweeping the executive offices for FBI listening devices, not Baca, said Hochman.

Tanaka was “the heartbeat,” the leader, the chief conspirator not Sheriff Baca.

So whom will the jury believe?