The story was alarming.

Late on Wednesday afternoon, August 21, the word went out that, just a few minutes before 3 p.m. that same day,  Los Angles County Sheriff’s Deputy Angel Reinosa, 21, had been walking to his car in the parking lot of the Lancaster sheriff’s station when, a sniper opened up on him, possibly from the upper floor of a nearby apartment building. The deputy was hit twice in the shoulder.

Fortunately, Deputy Reinosa was at the time wearing his bullet proof vest so only suffered what he described as a “graze wound.”

Yet, it wasn’t hard to imagine that, if the young deputy had taken off his vest—as one might tend to do if one is walking to one’s car to head home—the story could have had a tragic ending.

Even Lancaster Mayor R. Rex Parris talked about how the vest had saved the deputy’s life. 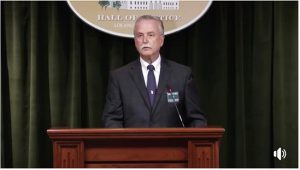 It was an understandable conclusion.

At least it was if the story had been true.

But it seems it wasn’t.  The shooting, the wounded deputy, the sniper….all of it… now appears to have been a hoax.  A fake.  An entirely manufactured drama.

At a hastily scheduled press conference held a few minutes after  11 p.m. on Saturday night at the department’s downtown headquarters, Captain Kent Wegener the head of the department’s Homicide Bureau, said as much, his expression grim.

Deputy Reinosa poked the two holes in his own shirt with a knife, Captain Wegener told those who managed to attend to press conference in person, or at least watched it via live stream on the department’s Facebook page.

“We are incredibly disappointed to have to report that the sniper fire story was fabricated,” Assistant Sheriff Robin Limon added after Wegener spoke.

The deputy was in reportedly in training at Lancaster where he was transferred after a short stint working in the county jails in the department’s custody division. It is not yet clear what Reinosa’s motives were for the alleged falsification.

According to Wegener, doubts began to arise about the shooting after investigators found “no ballistic evidence in the parking lot. ” No cars struck by gunfire. And no one in the area seemed to hear the purported two shots.  In short, a lot of things “didn’t add up,” he said.

Actually that’s what WitnessLA thought on Thursday afternoon, a day after the supposed wounding of the deputy, which was when we began getting calls from several sources close to the department who told us unequivocally that the shooting was a hoax, that the deputy faked being wounded, that there was no sniper with a high powered rifle—or any kind of weapon, for that matter.

(When we heard news of the possible hoax on Thursday, we were convinced enough by our sources to remove a reference to the shooting from a story we’d just published, explaining to readers in an update to the story that the shooting might not have really occurred.)

Perplexingly, however, even after we heard early on Thursday afternoon that the shooting was very likely a hoax,  the  LA County Sheriff’s Department sent out a statement late on Thursday that still treated the fake shooting as if it was a real one.

Then there were two days of radio silence.

Finally, the 11 p.m. Saturday press conference broke the silence, and the rumors were validated.

On Saturday, investigators were able to interview Reynosa about what they’d learned, at which time he reportedly confessed to having fabricated the story.

The investigation, said Wegener, “is ongoing,’ and is a criminal investigation.  When it is concluded it, will be presented to the Los Angeles D.A.’s “for filing,” he said.

Saturday night’s press conference triggered a string of reactions, including from the sheriff himself.

Social media was particularly active on the topic of the nonexistent sniper shooting of a Lancaster deputy.