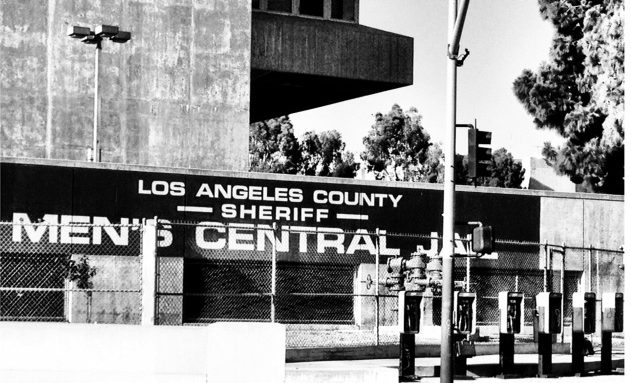 On Tuesday, the Los Angeles County Board of Supervisors voted to fundamentally change their plan to replace the unhealthy and unsafe Men’s Central Jail facility with a shiny new high-tech mental health jail known as the Consolidated Correctional Treatment Facility (or CCTF). 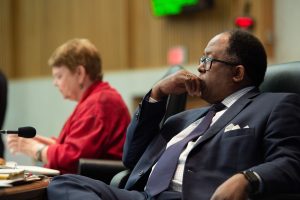 Supervisor Mark Ridley-Thomas, photos by Bryan Chan / Board of Supervisors

Now, the nearly uninhabitable, 1963-built downtown LA jail facility will be replaced by—not another jail—but by a new “Mental Health Treatment Center,” as the new planned facility is now named.

And that new treatment center will not be operated by the Los Angeles Sheriff’s Department, which controls the county’s jail system.

Instead, the county’s Department of Health Services will oversee the facility.

Furthermore, the treatment center will be staffed by members of the Department of Mental Health, instead of sheriff’s deputies.

“Sheriff’s deputies will never receive enough training to become mental health professionals, nor should they,” said Supervisor Janice Hahn who, together with Supervisor Mark Ridley-Thomas, sponsored the motion that proposed the new strategy.

“And jailers armed with tasers and pepper spray are inherently detrimental to creating the safe environment necessary for healthcare. ”

(There would still, however, be some deputies who provide security for the new treatment center. )

The motion, which narrowly passed with a 3/2 vote, will still ensure that MCJ would be torn down, and its inmates will still be transferred next door to the Twin Towers Correctional Facility, which now houses the county’s jailed mentally ill.

“Men’s Central Jail is a decrepit, outdated facility inconsistent with human values and basic decency,” said Hahn. “It puts both our inmates and our sheriff’s deputies at risk.” 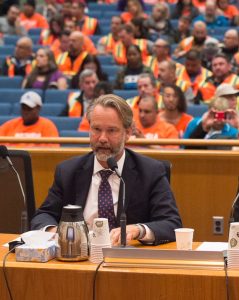 “We rejected a jail for those with mental illness,” said Ridley-Thomas, “and instead committed to looking into providing mental health treatment through a decentralized continuum of care.”

The board,  he said, also “invested in a plan to scale up diversion,” and commissioned multiple studies “to better understand and serve those in our care.”

When Hahn introduced the newly reformed-minded motion at Tuesday’s meeting, she made it clear that the county will still award the design/build contract to McCarthy Building Companies, Inc, which was to design and construct the originally proposed jail treatment facility, CCTF.

But, instead of building the state-of-the-art jail, she said, the county will instruct McCarthy to develop and build a new design for the Mental Health Treatment Center “that is informed by leading research.”

Not everyone was thrilled with the idea.

Supervisors Sheila Kuehl and Hilda Solis both voted against the revised project, saying, basically, that the change didn’t go anywhere near far enough.  The two had co-authored a competing motion that strongly suggested putting the jail building project on pause, in order to “reimagine” the whole tear down and rebuild project with an emphasis on diversion and treatment. 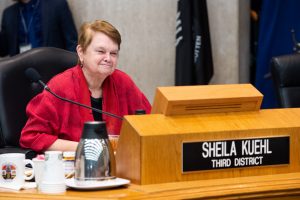 At one frustrated point, Kuehl mused aloud about what it felt like “to have to think through some of the some of the largest issues of your time.”

She considered it a great privilege, she said. “But there’s a lot of lost sleep, honestly, among the five of us.”

Solis pointed out that, with the original plan to build a new jail on MCJ’s footprint, “every phase of the project” must be fully signed off “by the Board of State and Community Corrections,” known as the BSCC. Would that still be true with the retooled non-jail project, Solis wanted to know?

After some discussion with other county officials, it was suggested that maybe the new, non-jail plan would no longer need BSCC approval. But, Solis’ question had made its point.

“It’s still a jail,” she said.  “It’s still preventing people from having freedom.  Now we’re proposing the largest mental health institution.  For many of us, that is not going to do.”

Out of the reportedly 150 or so advocates and experts who signed up to speak on the issue of jails and mental health, few wanted to go ahead with the 3,855-bed project to be built on the footprint of MCJ, no matter what it would now be called, and who would run it.

Instead most pushed passionately for more diversion and community-based health centers. 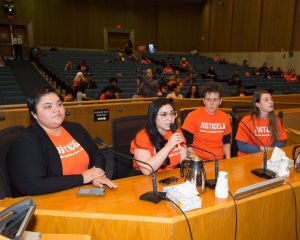 Many of the community advocate speakers wore orange JusticeLA t-shirts, photo/Board of Supervisors

“I believe this amendment was well-intentioned,” said the ACLU’s Peter Eliasberg, when it was his turn to speak about the revised plan. But he wanted to point out, he said,  that the largest state mental hospital in California has 1200 beds.

Eliasberg’s comments, plus a few others, inspired one more amendment to the motion before its passage, this one a read in by Ridley-Thomas.

This amendment instructs various county’s departments,  together with the CEO, and “community stakeholders,” to report back with options to “right-size the scale and scope of the project,” to “ensure a decentralized, trauma-informed approach to achieve the goals of improved treatment and public safety, in conjunction with diversion to community-based mental health treatment, whenever possible.”

The new amendment to the amendment, said Ridley-Thomas, is designed to say, ‘Look, exhaust the range of these opportunities of opportunities and possibilities so that what we ultimately wish to see happens in terms of better patient outcomes.”

It wasn’t yet clear how flexible the structural variations of the proposed new non-jail could be from the previous jail building plan—at least within the existing, just-approved contract.

But, as Kuehl noted, before any actual large sums of money can be moved, another approval by the board would be required, this one necessitating four yes votes to pass, not the usual three.  In other words, there was still time for further consideration, and further pivoting.

It wasn’t clear what those at the sheriff’s department felt about their removal from the pricy project, as no one from the department appeared to have been invited to speak on the matter.

An important and far less contentious moment occurred at Tuesday’s meeting when the board voted on a motion Kuehl read into the agenda, which would nix the planned Mira Loma Women’s Center project—a.k.a. the new women’s jail that was to have replaced the existing women’s jail, Century Regional Detention Center or CRDF, in Lynwood.

As Kuehl pointed out, the Mira Loma location posed “insurmountable obstacles’ to the goal of “creating a women’s jail that is the centerpiece of a gender-responsive corrections system.”

Located in the Antelope Valley, Mira Loma would have meant visiting families from most other areas of the county would have had to travel three hours or more one-way if they took public transportation to visit their loved ones.

(WLA wrote earlier about the problems with the Mira Loma project.)

In a related action, the board also passed a second motion that would require the hiring of “expert consultants on gender responsive programming’ for the existing women’s jail, Century Regional Detention Facility (CRDF). The idea is for the consultants to help design, develop and program a new women’s jail to replace the now-canceled Mira Loma facility.

The motion would also trigger additional research to “collect and analyze data on the pathways that result in the arrest, prosecution, and incarceration of women in LA County.”

In explaining why she thought this motion important, Kuehl pointed to the work of the UCLA research group called Million Dollar Hoods.  “They indicate,” she said, that the five most common reasons women are jailed are for theft, drug possession, driving on a suspended listen, driving under the influence, and failure to appear.

“Those are not the crimes of the century, usually,” she said. But they’re certainly enough to disrupt and devastate a family. So it’s essential that the county develop a forward-thinking,  gender-responsive plan for justice-involved women in particular.”

Solis, who co-authored the motion with Kuehl, also described the combination of the two motions as representing a perspective that was long overdue, that she hoped would “identify needed holistic programming and services based on best practices for incarcerated women and their families, as well as practical solutions to keep women out of the criminal justice system and out of jail.”

Ridley-Thomas added his own summation later in the day.

“The work is complex,” he said.  “The nine motions today on these topics underscore this.”  But,  he was encouraged by the progress the county had already made, “diverting nearly 3,000 individuals from jails to treatment,” among other things.

“It is time to expand upon these solutions, and today was an important step in that direction.”