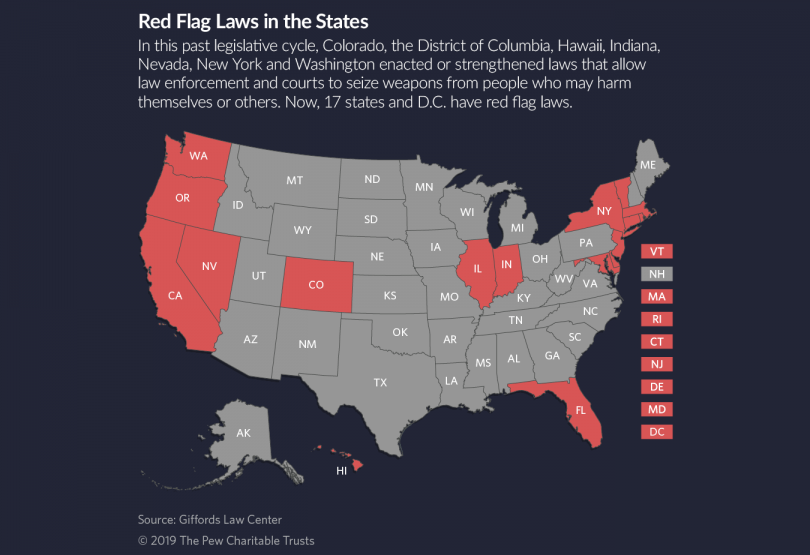 [Editor’s Note: In California, counties have varied widely in their use of the state’s red flag law, passed in 2014, in response to the Isla Vista mass shooting. San Diego County stands apart from most other counties in that it has emphatically embraced the red flag law, the Trace and Voice of San Diego report. Since 2017, San Diego County has approved over 300 gun violence restraining orders — more than any other county in CA — resulting in the seizure of more than 400 weapons and nearly 80,000 rounds of ammunition. To put it in perspective, in 2018, LA County issued 31 of the restraining orders, and San Francisco issued just one, while San Diego issued 185. While it’s unclear if the law has prevented mass shootings in the area, San Diego’s City Attorney Mara Elliot, who has become a national champion for “red flag” laws and implementation, thinks so. “We can never prove that we saved lives, but we believe we have,” Elliott said.]

When a local student posted a photo of himself online holding a gun with a message about going to his school and killing some people he didn’t like, the Palm Beach County Sheriff’s Office responded.

A deputy and a licensed mental health professional went to the student’s home and talked to his parents. “We were able to get the kid into a mental health facility immediately. And we’ve been checking in on him every few days since then,” Sheriff Ric Bradshaw told Stateline.

A rarity among local law enforcement agencies, the Palm Beach County Sheriff’s Office employs a staff of round-the-clock mental health and threat assessment experts who continuously seek intelligence from the community on people they believe could pose a threat of violence. When a tip comes in, the team assesses the risk and intervenes if warranted.

In the wake of back-to-back shootings in Ohio and Texas this month, red flag gun laws have emerged as a potentially bipartisan method of curbing the nation’s escalating number of mass murders. But the infrastructure that Palm Beach County has in place may be necessary to make the laws work.

Nationwide, only a handful of organizations have enough trained mental health, law enforcement and security experts on staff to seek information from friends, neighbors, co-workers and family on potential shooters, and act on those tips.

“We’re trying to stop something before it happens, which is what we should be doing,” Bradshaw said. Most police departments are fully prepared to respond to active shootings, but they’re not nearly as skilled at preventing them, he said.

Enacted in 17 states and the District of Columbia, red flag laws allow police, and, in some cases, friends or family members, to petition a court to remove guns from a person who might pose a threat to himself or others.

Violence prevention experts support the laws but say most of the country’s more than 17,000 local police forces are ill-equipped to identify potential shooters, much less intervene and take their guns away. They say having officers equipped to make such behavioral threat assessments is key to reducing mass shootings.

“Red flag laws are only a small piece of a much bigger puzzle,” said Patrick Prince, a former Los Angeles police officer who is now associate vice provost for threat assessment at the University of Southern California. “If we thought that these laws by themselves would be sufficient, we’d be foolish.”

Officials can take someone’s gun away, and that person will find another way to harm people, he said. The best approach is to steer distressed individuals away from violent acts and find them the help they need to resolve their issues and move on, Prince said.

Florida enacted a red flag, or extreme risk protection, statute last year. Testifying in Washington at a March hearing of the Senate Judiciary Committee on whether more states should enact such laws, Bradshaw said the new statute represented another tool his team could use to stem shootings.

But he stressed that it was only one of several legal avenues and risk management techniques the unit employs to defuse potentially violent acts.

Other Florida statutes — on domestic violence and on involuntary commitment for mental health and substance abuse reasons — and court injunctions also have been used in the past to remove guns from people deemed an imminent risk for violence, he said in an interview with Stateline.

At the March hearing, Bradshaw told the committee he started the behavioral threat assessment unit because his force “was well-trained for an active shooter, but inadequately trained in the area of prevention and mental health.”

But when it comes to mass shootings — defined as crimes in which four or more people were killed — a new study estimates that as many as one-third of them are committed by people with mental illness. Although mass shootings are on the rise, they accounted for less than two-tenths of 1% of U.S. homicides between 2000 and 2016.

Still, mental health issues are the “most prevalent stressor” leading to violent acts, according to a 2018 FBI study of pre-attack behaviors of active shooters.

According to Russell Palarea, president of the Association of Threat Assessment Professionals, that finding doesn’t mean that most people who commit violent acts have a mental illness.

Instead, research indicates that people considering a violent act almost always exhibit some mental health symptoms, including depression, anxiety and paranoia. The use of drugs and alcohol also plays a major role.

“In 98% of the cases where you see these shootings happen, two things happened first,” Bradshaw said. “Somebody had information about the shooter ahead of time, and the person had mental health issues.”

Problems with work, relationships and finances can trigger the behavior. “We all have characteristics of personality disorders and mental health issues at certain times in our lives. It’s who we are as humans,” Palarea said.

When police, teachers, human resource officers and others are trained to recognize the mindsets and behaviors that precede violent attacks, they can try to prevent them.

“The ultimate goal is to change the subject’s mind. If they’re thinking about a violent act, we try to help them break out of their rut. Instead of killing their boss, we’re saying ‘Don’t do that. Don’t hurt anybody. Get a new job,’” Palarea said.

Unique within Florida, the Palm Beach County Sheriff’s Office behavioral services and threat assessment unit was formed in 2012 in response to a rash of officer-involved shootings of people with mental health issues.

Today, the $3 million, 20-person behavioral health unit sifts through information from the public, monitors social media and works with local hospitals, mental health organizations, fire departments, schools and other groups to identify people who may pose a threat.

“Just showing up and letting the person know we’re watching can sometimes resolve the problem,” said Sgt. Skip Reasoner, who was one of three founding members of Palm Beach County’s behavioral health team. After that initial visit, Reasoner explained, the unit typically keeps tabs on people at risk of violence, sometimes for years, until they are no longer considered a threat.

When the unit first formed, friends and family members were loath to report suspicious behavior of a loved one, for fear it would result in an arrest, he said. To get the public to come forward with tips, the unit relied on word of mouth.

Eventually, Reasoner said, “one success story led to another. Organizations and family members started coming in. It grew itself. We became the good guys.”

Beginnings of a Discipline

The first model for behavioral threat assessment and management was developed by the U.S. Secret Service following the attempted assassination of President Ronald Reagan in 1981. The methodology, published in 1995, became the gold standard nationwide.

Essentially, behavioral risk management starts with identifying individuals in a community who may pose a threat of violence, followed by analysis of the person’s background, including interviews with neighbors, co-workers, friends and others, and intervention when warranted.

It has worked to protect presidents, foreign dignitaries and celebrities, and could be adapted for local communities, Palarea said. But outside of the federal government, major corporations and other well-funded groups, it has not been widely adopted.

One of the first local jurisdictions to set up a threat assessment unit was Los Angeles County. Its police department started one in 1990 after a high-profile murder of a Hollywood actress who had repeatedly received threatening letters.

A handful of other local agencies followed. The police department at Virginia Polytechnic Institute and State University, for example, set up a threat assessment unit following the 2007 killing of 32 students and staff by a 23-year-old student who was known to have mental health problems.

Local law enforcement agencies often have one or two detectives with training in behavioral health and risk assessment who try to prevent violence, Palarea said. But most can’t afford the kind of round-the-clock force needed to monitor and intervene in every potential threat.

A bipartisan bill in Congress, the Threat Assessment, Prevention and Safety Act, or TAPS, would provide federal grants to states to set up violence prevention teams in police departments, schools and other community organizations.

Since it began in 2012, Palm Beach County’s threat assessment unit has managed more than 700 cases, Bradshaw said. Since then, no officer from the sheriff’s department has shot a person with mental illness.

Cristine Vestal is a staff reporter for Pew Charitable Trust’s Stateline, where this story first appeared.