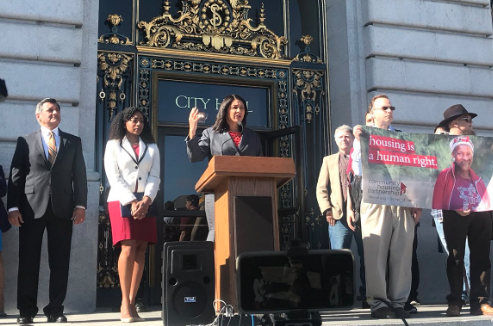 On Tuesday, the San Francisco Board of Supervisors and the SF Sheriff’s Department took steps to eliminate the onerous fees levied against people caught up in the criminal justice system.

The board’s president, London Breed, introduced legislation get rid of 10 fees, including an up-front charge of $1,800 for those placed on probation, a $125 sign-up fee plus $25 per day for electronic monitoring, as well as a $135 charge for being booked into jail, and a fee of $150 for a pre-sentence report.

“Californians who are incarcerated often face a double debt. They pay their debt to society when they serve a jail or prison term, and then they owe thousands of dollars in fines and fees when they get out of jail or prison,” the SF Treasurer’s Fines and Fees Task Force wrote in an October memo discussing the issue. “There is significant research that shows that men and women exiting jail or prison cannot pay these fines and fees, and the financial burden of these fines and fees can create significant barriers to their successful re-entry as they try to get jobs and secure a place to live.”

As part of the effort to reduce the financial burden of criminal justice system-involvement on poor San Franciscans, Sheriff Vicki Hennessy announced that her department would eliminate fees for electronic monitoring and the Sheriff’s Work Alternative Program (SWAP), through which eligible people can join a work crew in lieu of jail time—and pay a $100 registration fee and a $20 daily fee. “While up to 70 percent of electronic monitoring fees are already waived, as a matter of principle, the Sheriff’s Department has agreed to eliminate electronic monitoring fees altogether under this proposed legislation,” Hennessy said in a statement.

With the help of the Treasurer’s Fines and Fees Task Force, as well as Public Defender Jeff Adachi’s Office, the supervisors were “able to identify all the fees that are levied on our residents and found these fees are actually incredibly costly to administer, and they are an insufficient revenue source for our city,” Breed said during the supervisors’ meeting. Between just 9 percent and 18 percent of these fees that San Francisco demands even make it into the city’s coffers.

More often than not, people are unable to pay their debts to San Francisco, which makes reentry all the more daunting. According to Breed, unpaid criminal justice fees can lead to wage garnishments of 50%.

At a press conference, the supervisor revealed that some of her own family members have had to pay fees for their involvement in the criminal justice system. And when Breed served as the executive director of the African American Art and Culture Complex, some of her employees’ wages were garnished to pay off the fees. Joe Williams speaks about the hardship that debt to San Francisco has created for his family.

Joe Williams, a young father struggling under the weight of these fees says that he had to pick up two extra jobs to keep his family afloat. “I don’t get to see my kids because I’m working to pay these fees, and they don’t get the quality of life they deserve,” Williams told the crowd at a press conference Tuesday on the steps of SF City Hall. “I’m forced to choose between paying these fees and paying for diapers. These fees drive economic hardship.”

Experts say that the collection of these fees does not deter crime, either.

“We’re talking about people who have already served their time in the criminal justice system, people who have paid their debt to society yet outside of those iron bars, they’re still shackled with the financial debt that they are unable to pay,” Breed said. “It follows them for years.”

The fees, Breed said, “are counterproductive, problematic sources of revenue borne on the backs of our most vulnerable population of San Francisco–and we’re not having it anymore.”

“I’m asking to be the first in the country to end these fees,” Breed added.

The proposed legislation is expected to be heard in committee in a month.