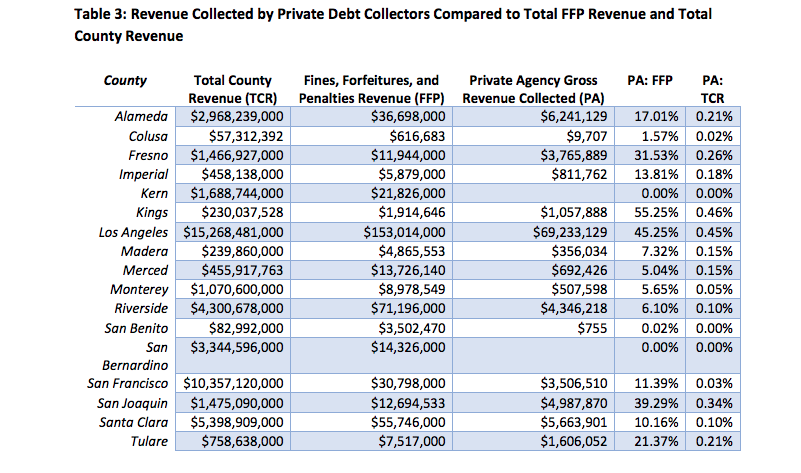 California’s system of criminal fines and fees, and its use of under-regulated private debt collection services to collect those fees, place an outsized burden on low income residents and communities of color, according to a report from the California Reinvestment Coalition.

California has a total of 684 criminal justice penalties. Statewide, nearly two-thirds of adults arrested, and hit with those justice system fines are people of color. Neighborhoods of color are over-policed, the report says, and black and Latino people face higher traffic stop rates than their white counterparts.

The report calls for a “full overhaul” of a system that ensnares people who are unable to pay their traffic and criminal justice system fees, whose “accumulated debt can spiral out of control,” and lead to unnecessary incarceration.

These debt collectors make between 12 to 18 percent for new debts, and 15 to 26 percent commissions on debt that is over five years old.

CRC researchers looked at the practices of 17 counties, including Los Angeles, San Francisco, Alameda, and San Bernardino, and found that just one county’s debt collector contract included a code of ethics.

The City and County of San Francisco recently eliminated fees charged to people involved with the criminal justice system making SF the first jurisdiction in the country to ban such fees, which include charges for electronic monitoring ($35 per day), jail booking, and probation ($50 per month). These fees, according to the ordinance, and to the city’s new mayor, London Breed, saddle low-income residents with unnecessary debt and increase the likelihood that people on probation will return to lock-up.

While the ordinance is not a cure-all (SF still must charge mandatory state fines), the SF Supervisors hope their action will inspire other jurisdictions in California and across the nation.

“Both counties and state-wide governments need to take steps to ensure that revenue is not being made off the backs of those who can afford it least,” says Aila Ferguson, Legal Fellow at the ACLU of Southern California. “It is heartening to see the progress that has been made in reforming our criminal justice system, but fines and fees must be abolished so that counties are not looking to raise revenue from those who can afford it least.”

“The amount collected is minuscule,” says Paulina Maqueda Escamilla, Researcher at the California Reinvestment Coalition. “Private debt collectors are incentivized to collect from poor people and people of color by any means possible, walking away with most of what is paid.”

For example, Los Angeles, a county that has a total annual revenue of $15 billion, pulls in less than half a percent of that revenue from privately collected debt. Most of the other 16 counties made even less. Alameda scraped .21 percent from debt collections, and Monterey County made .05 percent of total revenue from collections.

The report urges California officials to stop using third-party debt collectors, and to increase transparency surrounding the collection of debts.

The researchers also call on the state and counties to launch “ability-to-pay” evaluations across all court systems, and to dump debt that’s more than five years old.

“This would most benefit those who cannot afford to pay these debts, nor deal with
the consequences from private debt collectors trying to collect,” the report says. “This would also save money for counties and their courts, who currently try to collect debt that is unlikely to be paid.”