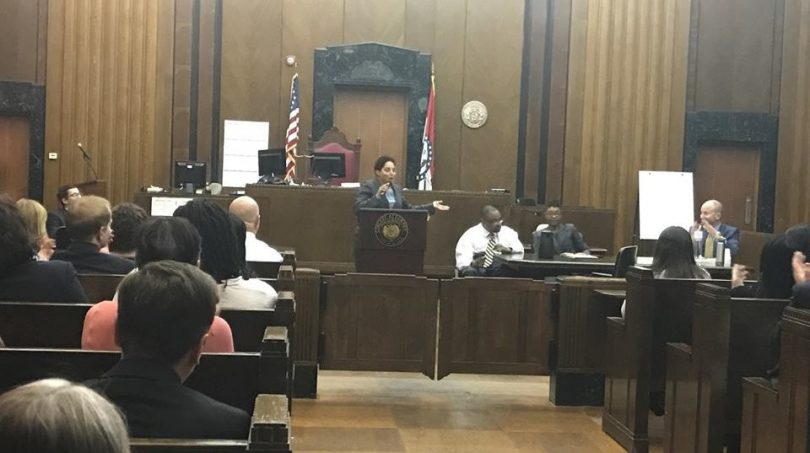 On Monday morning, August 26, the California Supreme Court voted unanimously that it is permissible for the Los Angeles County Sheriff’s Department — and any other California law enforcement agency — to disclose misconduct by a deputy to prosecutors when that deputy is a material witness for or otherwise significantly involved with a criminal case.

The justices ruled that an individual’s right to a fair trial outweighs the privacy rights of officers who have a history of problematic behavior.

Here’s the backstory: In 2014, then-interim Los Angeles County Sheriff John Scott convened what he called a Commander’s Panel to review the individual personnel files of approximately 9,000 members of the LA County Sheriff’s Department. The panel’s goal was to identify officers who had histories of dishonesty and related misconduct in their personnel files which might fall into the category of exculpatory material that should be turned over to the defense in a case in which the department member was involved.

The idea was that the officers’ past behavior would constitute “Brady material,” as it is called, in reference to Brady v. Maryland, the landmark 1963 U.S. Supreme Court ruling which established that the prosecution must turn over all evidence that might exonerate the defendant — a.k.a. exculpatory evidence — to the defense.

The panel identified approximately 300 department members with sustained allegations in their personnel files which might fall into the category of Brady material.

Fast forward to 2017, when the LA Times broke the news that Jim McDonnell, who was by then the sheriff, wanted to send the Brady list of deputies to the Los Angeles District attorney and other relevant prosecutorial agencies.

This didn’t mean that material from a deputy’s personnel file would be sent with the list. If a deputy was going to testify as a material witness in a criminal case, the DA could file what is known as a Pitchess motion to get a court order for access to the relevant material, which the prosecution is then required to turn over to the defense.

The Association for Los Angeles Deputy Sheriffs or ALADS sued to challenge this procedure of handing over potential Brady material involving LASD deputies, asking that the court issue a temporary restraining order blocking the sheriff’s department from disclosing the Brady list or the identity of any individual deputy on the list to the DA or any other agency without first obtaining a court order after filing a Pitchess motion.

ALADS also wished to preclude the sheriff’s department from transferring deputies or restricting their duties if they were placed on the Brady list.

A state appeals court ruled in favor of ALADS in July 2017, and McDonnell immediately appealed the decision to the California Supreme Court.

“This is about respecting the rights of peace officers, and preserving the integrity of criminal cases,” Sheriff McDonnell said at the time.

“There is no other objective, other than to seek clarity and guidance from the courts on how to comply with our legal responsibilities under the Brady Decision,” the sheriff added.

Earlier this year, 55 prosecutors from around the nation signed a joint letter expressing their support for the general idea of a Brady list.

“When police officers refer cases to a prosecutor’s office,” the prosecutors wrote, “their testimony or role in the investigation – including in interviews, chain of evidence collection, or as an eyewitness – may be a significant factor in the prosecutor’s exercise of the weighty discretion to file charges and prosecute the case. Brady lists allow prosecutors to implement an orderly process for gathering in one place information on officers who may not be able to serve as credible witnesses. Serious allegations of having made false statements, using excessive force, or engaging in other questionable behavior could undermine the credibility of those in law enforcement who are central to the pursuit of criminal charges that trigger loss of liberty and other significant consequences.”

LA County’s current sheriff, Alex Villanueva, said during his campaign that he is not against the Brady list, per se.  But more recently, he dismissed the existing list as a “fake list” that was used to retaliate against or discipline deputies unfairly.

Yet on Monday night,  Sheriff Villanueva put out this interesting statement on the California Supreme Court’s decision.