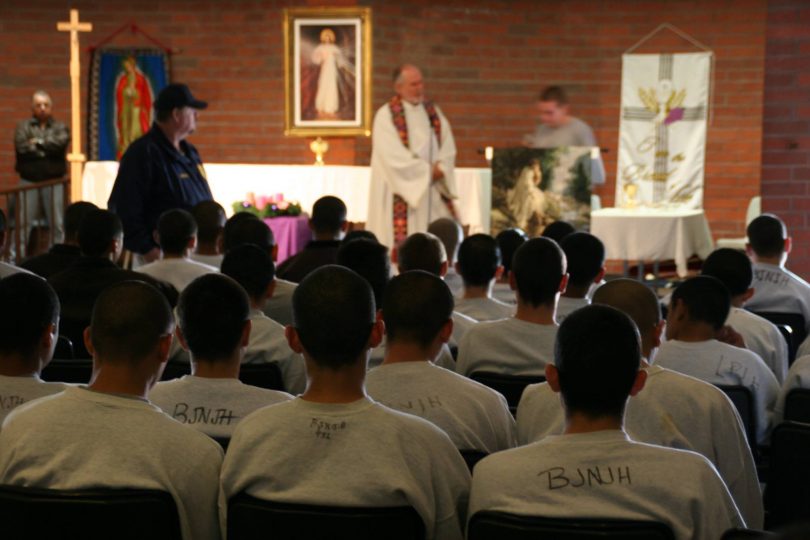 All of LA County Probation’s three juvenile halls have religious services every Sunday morning, which are supposed to be available for any of the kids in residence who want them. Both Catholic and Protestant services are offered. But a youth may request someone different if he or she subscribes to another religion.

No youth is pushed to show up.  Attendance is discretionary. Yet, while the weekly services are optional for the youth, it is mandatory under state law for the various facilities to provide them.

To be specific, in the State of California’s Code of Regulations, there is a section known as Title 15, which, among other things, lays out the “Minimum Standards for Juvenile Facilities.”

A section in Title 15’s listing of minimum standards is devoted to a description of religious requirements. And at the top of that list is the requirement that each facility must “provide access to religious services and/or religious counseling at least once each week.”

The availability of the weekly Sunday church services is also spelled out in the LA County Probation handbook available online for the parents of kids who have been placed in any of the county’s juvenile detention facilities.

In the past year, however, as staff shortages and incidents of violence in the juvenile halls have risen, there have been repeated reports that only small numbers of the kids at Barry J. Nidorf Juvenile Hall located in Sylmar, California, have been allowed to attend services, meaning the majority of the youth are left out.

In 2019, things reportedly got worse. On some Sundays services began to be canceled altogether at Barry J., as the Sylmar facility is commonly called.  As time went on, the cancelations increased.

Yet, on the two Sundays that to some youth would be the most significant that month—namely Palm Sunday and Easter Sunday—the services occurred but with startlingly few kids.  Often as few as five or six youth were reportedly allowed to attend any given service.

Finally, in May of this year, matters took a drastic downturn, and services were canceled on the Sundays of May 5, 12, 19, and 26.

In other words, there were no religious services in the month of May at all.

Services were again canceled this past Sunday, June 2, at Barry J, with word that next Sunday will likely be canceled too.

“That’s unheard of,” said a probation supervisor who works at another facility.  “Sometimes they’d cancel a service if there was a gang fight or something,” he said.  But five weeks in a row…?”

When the services are canceled, clergy or lay volunteers are usually allowed to go around to the various units in the juvenile halls, in order to visit with the boys and the girls personally.

They don’t take the place of a church service or mass.

On Tuesday of last week, distress about the no church issue ramped up to the point that the head of the Office of Restorative Justice of the Archdiocese of Los Angeles sent a letter to LA County Probation Chief Terri McDonald and Chief Deputy Probation Officer, Sheila Mitchell (who oversees the juvenile side of the department), asking for a meeting to discuss their concerns about these repeated cancellations.

When we talked to staff members at Barry J and elsewhere, they attributed the cancelation of the church services to conditions in the hall that they say have become increasingly unsafe, both for youth and for staff, causing angry and fearful officers to repeatedly “call out” sick in problematic numbers, meaning that other detention officers must work double shifts, and still the facility has become chronically short staffed.  The short staffing has resulted, domino-like, in the cancelation of various programs for the facilities’ kids, church services among them.

Reports of short staffing and violence at the county’s juvenile halls have been increasing for more than a year.  Yet in late April they seemed to hit critical mass at Barry J.

That was when an experienced detention service officer working at Sylmar called Probation Chief McDonald early in the morning and, not reaching her, left an emotional message demanding that members of the county’s probation commission come to Sylmar “to see the chaos that is going on at the hall,” or there would likely be a staff walkout.

Probation Commission president, Joe Gardner did make a visit a few days after the call came in, and his subsequent report described an out of control and drastically understaffed situation at the hall.

According to officers presently working in the facility, things have not improved—hence the string of cancellations of church services. “We just don’t have the staff to bring the kids over to the chapel,” one officer told WitnessLA. “It’s not safe.”

Jim Schoengarth, president of SEIU Local 721, which represents the supervising officers working at probation, expressed surprise at the number of cancellations.

“Now that we’re aware, we will begin to monitor, and we believe that this is just a result of the continued problems facing our officers and the juveniles in our current conditions,” Schoengarth said.

“We want to make sure the youth don’t lose this opportunity completely.”

When we contacted probation higher-ups about the reports of canceled church services, the department sent a statement through probation spokesperson, Kerri Webb.

“The Department is looking into the allegations,” the statement said, ” and we are working with Office of Restorative Justice and the Archdiocese to ensure that the religious and spiritual needs of our youth are being met.”

More than just a service

Those familiar with church services at the juvenile halls, explain that their importance goes well beyond religion, or meeting the state law.

Most of the pastors, priests, and others who preside over or help with the church services are experienced at going into the county’s juvenile halls and camps, and generally good at relating to the kids who show up. Over time, they get to know individual kids and are often viewed as temporary parents, aunts or uncles, encouraging the youth to believe in the best in themselves.

This is especially true when Father Greg Boyle, the founder of Homeboy Industries, is scheduled to lead a Sunday service at any of the juvenile halls. He inevitably has crowds of kids who want to see him and attend the mass where he will officiate.  Boyle is an unusually gifted speaker, the author of two best-selling books, and in high demand all over the nation and, arguably, the world.

“So it’s a big deal when he comes,” said a probation source.

Also, in the course of the service and after, Boyle lets kids know about the programs Homeboy offers, such as job training, counseling, tattoo removal, and a variety of other free wraparound services to facilitate healing and growth for youth like those at the halls.

At the end of the mass, he hands out cards to anyone who wants them, spending time connecting to as many individual kids as time will allow, encouraging them to come and see him when they get out, effectively throwing out a series of emotional ropes to youth who often will take advantage of that outreach of hope when they are struggling later.

Yet, on April 31, the most recent time that Fr. Greg was to officiate at Barry J, instead of a room packed with kids as it has been in years past, a grand total of five boys and zero girls were reportedly allowed to attend the mass.

“So, all those kids who were not allowed to come,” a source told us, “lost much more than just the service.”

The photo at the top is courtesy of the Jesuit Restorative Justice Initiative and was taken at Barry J Nidorf Juvenile Hall several years ago when more kids were reportedly allowed to attend church services. In this photo, Father Mike Kennedy was presiding.

Leave a Reply to Friend not Foe X