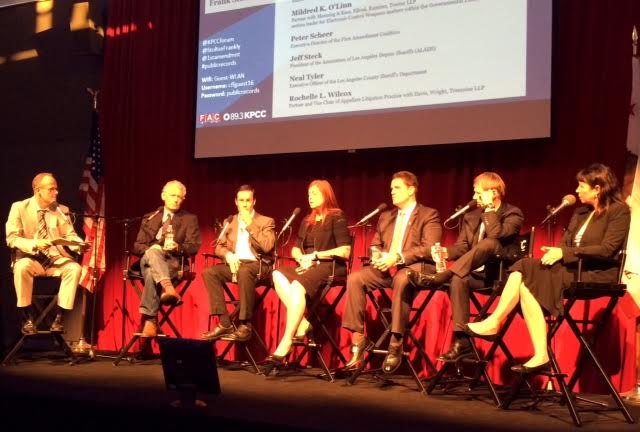 In Los Angeles and around the country, law enforcement agencies are purchasing and deploying police body cameras as a means of increasing accountability to the public. The use of all these new cameras means the potential accumulation of miles and miles of video footage. The question of who has the right to see all this video (and when, and under what circumstances) is already the subject of debate between police, civil rights advocates, and the public.

Last week, at the Crawford Family Forum in Pasadena, KPCC’s Frank Stoltze moderated what turned out to be a very informative—and often contentious—discussion on the complex issues relating to law enforcement transparency, and what the public legally has the right to know.

One of the first and most polemic-producing topics that emerged was the June 2, 2013 fatal shooting of an unarmed man, Ricardo Diaz Zeferino, by Gardena police officers, and a push from the Times (along with the Associated Press and Bloomberg) for the release of dash cam footage of the incident.

The city of Gardena settled the resulting civil lawsuit to the tune of $4.7 million, but fought to keep videos of the shooting under wraps, citing privacy concerns. Earlier this month, two years into Gardena’s fight to keep the videos hidden, federal Judge Stephen V. Wilson ordered the city to release footage from two radio car dash cams.

Panelist Missy O’Linn, who was Gardena’s attorney during the legal battle, had a great deal to say on the matter of police rights.

O’Linn argued that the videos should not have been released because they were part of a protective order. “The problem here is the process,” she said. “Technology is way ahead of the law…we need rules. We need guidelines…as to what is to be made public.” And then a few beats later: “It appears that the first amendment has usurped state law.”

This last remark triggered a rash of noisy murmurs from the audience, which was filled with lawyers, journalists, and advocates, in addition to interested community members.

LA Times attorney Rochelle Wilcox, who successfully fought to get the names of Long Beach officers revealed last year, explained that the public is entitled to access records in federal cases, “unless the party advocating for secrecy [in this case, the city of Gardena] meets a burden of showing compelling reasons why the records should be sealed.” (The same is not true when it comes to state cases.)

O’Linn was not cowed. She argued that releasing video only presents one perspective of an incident to the public, and can create a pubic safety issue. “The public’s reaction, without information—which is controlled by mass media—has the potential to set your cities on fire, destroy your businesses…If it was no justice, no peace, marching in solidarity, and peaceful protest, that’s one thing. But call Baltimore, call Ferguson, where the business owners’ lives have been destroyed because they didn’t have a peaceful protest. And quite frankly, that is a public safety issue.”

When Stoltze asked O’Linn if it was fear of public unrest that was the most compelling reason given as to why the Gardena videos should not have been released, O’Linn was quick to answer. “Absolutely…Darren Wilson, an officer in Ferguson, Mo, will never work again as a police officer. Someone tried to beat him to death, and he will never work again. My officers do not deserve to be hung, judged in the media, without full information.”

So would she argue for a release of the entire record, including the video? Frank asked. “If you want full information out there, would that not be the logical next step?”

“The public does not go looking for that information,” said O’Linn. “The media directs the conversation.”

Peter Scheer, executive director of the First Amendment Coalition, said it would not be too burdensome to release some videos, on a case-by-case, as-needed basis. “When it comes to police investigative records, they are 100 percent exempt from disclosure under the California Public Records Act. But the police have the discretion, if they wish, to release them,” said Scheer. “So why not, in some of these cases, release these videos at the discretion of the department, where the public’s need to know is compelling?“

Jeff Steck, president of the Association of Los Angeles Deputy Sheriffs (ALADS), jumped in to say that videos often do not tell the whole story about an officer-involved shooting or other use-of-force incident. “I’ve just begun to understand what I see, and I’m an expert in the field,” said Steck.

Steck did agree with Scheer’s contention that the videos should be released to the public on a case-by-case basis, but said he was worried about the protection of victims. “I saw an officer get murdered on camera. If that happens to me, I don’t want my death on TV.”

Steck also expressed concern about the effect that indiscriminate video release would have on the privacy and the safety of officers and their families in general. “There are people who want to do us harm. We lost two deputies who were killed at their homes. We are concerned for our safety. When we’re on duty, we’re aware of the risk, but we don’t to take this home to our families.”

And if all videos were to be released, O’Linn broke in to say, it would be a huge burden to taxpayers, “…because your cities and counties that want to implement body worn camera programs are going to need to hire a team of editors to blur out faces and remove private information.”

LASD Undersheriff Neal Tyler said the department is working on new website that will share crucial data with the public regarding use-of-force incidents, without naming individual officers involved. The site will include information and statistics on officer-involved shootings, as well as data on complaints from the public and officer discipline.

The LA Times’ Jack Leonard challenged law enforcement’s frequent unwillingness to release officers’ names. “We give police officers a lot of power,” he said. “We invest in them the responsibility and ability to investigate serious crimes, and also we give them the legal right to use deadly and other types of force. Yet, when individual officers are found to have misused that right, we don’t get to find out who the officers are.”

The public has way of knowing how departments deal with personnel issues like sexual misconduct, or officers who have been disciplined for lying, Leonard continued. “We have no idea how departments actually deal with that because it is all secret,” he said, explaining that part of the problem is with state law, not so much individual department policy.

Leonard was referring to the Public Safety Officer Procedural Bill of Rights, sometimes called the Peace Officers Bill of Rights (POBR) which, among other things, prevents public release of officer discipline issues.

On the other side of the legal tug-of-war, the California Public Records Act, in the name of government transparency and accountability, establishes the public’s right to view public records. But it has certain exceptions to the rule. Law enforcement personnel files fall under the “exemptions” category.

During the comments portion of the discussion, the ACLU’s Peter Bibring, who was in the audience, pointed out, that California has less access to police officer records than, say, Texas and Florida, where there is “open access once there’s a finding of misconduct by the department.” Many other states have automatic open access to peace officer records, even misconduct allegations, said Bibring.

Wilcox, the Times’ attorney, added more on the topic. “The police are public employees who have a very unique kind of protection,” she said. “They perform one of the most important roles in society, and yet the transparency that the government has agreed is good, doesn’t apply to them. So while we can get public misconduct information about teachers, we can’t get any information about the people who have the ability to do harm.”

O’Linn said she and her colleagues “encourage our departments not to take what we call a ‘bunker mentality,‘ to hunker down and refuse to ask questions. And they are listening.”

“When my police chiefs terminate someone, they can’t even turn to the rest of the department and explain why,” said O’Linn. “We do encourage departments to be more forthcoming, but they also have to act within the law.”

In the end, much of the issue was about public trust, said moderator Frank Stoltze as the evening drew to a close. “I think the challenging thing is if there’s been misconduct, the public wants to know what’s happening to law enforcement officers who are engaging in bad behavior,” said Stoltze. “I think the question is confidence in law enforcement. The Sheriff’s Department may be taking care of bad cops and firing them, but we don’t know that.”