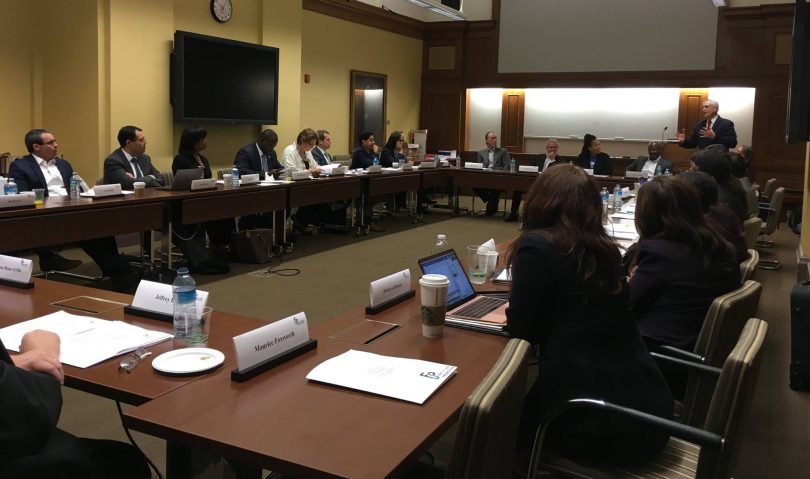 “If it happened to me, it can happen to anyone.”

That’s what Ray Krone tells people every chance he gets. Ray, a military veteran with no prior criminal record, was convicted of murder and kidnapping in 1992 and sentenced to death. He spent more than 10 years in Arizona prisons for a murder that DNA testing later determined he did not commit.

This past month, Ray shared his perspectives with eight elected chief prosecutors from across the nation in an unprecedented roundtable to discuss strategies to enhance accountability and transparency in prosecutors’ offices. They were joined by three other exonerees — Michael Morton, who served 24 years in prison before he was exonerated for the killing of his wife; Sabrina Butler-Smith, wrongfully convicted and sentenced to death as a teenager for the killing of her nine-month-old son; and Cornelius Dupree, who spent 30 years in prison before DNA evidence exonerated him.

This unique convening — organized by Fair and Just Prosecution in partnership with the Innocence Project, Penn Law’s Quattrone Center for the Fair Administration of Justice, Witness to Innocence, and NYU’s Center on the Administration of Criminal Law — brought elected prosecutors face-to-face with wrongfully convicted individuals who collectively spent over 70 years in custody for crimes for which they were later exonerated. It enabled DAs from across the nation committed to new thinking to hear how the justice system can go horribly wrong. And it brought these leaders together with national experts to help develop strategies that promote enhanced safeguards and fortified review processes.

Conviction integrity units are relatively nascent institutions in the American judicial system. The concept dates back to the year 2000, when San Diego County Deputy District Attorney George “Woody” Clarke established a “DNA Innocence Project” to review claims of innocence, and took hold in 2007 with the establishment of conviction integrity units in Dallas and Houston. Those offices built out models working co-operatively with innocence organizations and the defense bar, an approach also followed by the Brooklyn DA’s office. In the decade since, over 30 conviction integrity units have been established across the country. Yet that number represents simply a drop in the bucket in the over 2,000 DA offices around the nation.

While launching these units is an important first step, there are significant disparities in their internal operations and the efficacy of the programs. Many of the earliest units failed to embrace nationally recognized best practices, limiting the cases subject to review, operating with little transparency, and failing to work collaboratively with other stakeholders. Some units failed to use lessons learned and establish proactive and preventative processes to identify the root causes of these miscarriages of justice and thereby safeguard against future tragedies. Others were marginalized within their offices and lacked adequate resources, credibility, reporting authority or independence to carry out their review function.

Conviction integrity units should not just aim to redress wrongful convictions; they should also seek to establish and maintain the confidence of their communities in the integrity of the justice system. To do so certainly requires unlocking a cell door and erasing a record when an injustice has occurred. Yet it also requires the courage to assess and address system weaknesses and practices — including faulty eyewitness identification or lineup procedure, coerced confessions, unreliable forensic science, and restrictive approaches to sharing potentially exculpatory information — that lead to these errors in the first instance. It requires a commitment to scrutinizing the integrity of all aspects of prosecutive decision making, from charging, to plea bargaining, to case handling. And it requires that prosecutors do so in a transparent fashion.

Ray Krone was the 100th death row prisoner freed due to a wrongful conviction, but he is far from the last. Since 1973, 160 people have been released from death row after evidence of their innocence was uncovered, and in the last 30 years, more than 2,100 men and women have been exonerated after their convictions for a variety of serious crimes were overturned.

We owe it to each of these individuals to forge a justice system that learns from these past mistakes and that commits to doing better.

Miriam Aroni Krinsky spent fifteen years as a federal prosecutor and is the Executive Director of Fair and Just Prosecution, a national network of elected prosecutors committed to new thinking and innovation.

This essay originally appeared in the Huffington Post, and was republished with their permission.

Image by Fair and Just Prosecution: Conversation between exonerees, prosecutors, and criminal justice experts, on October 23.