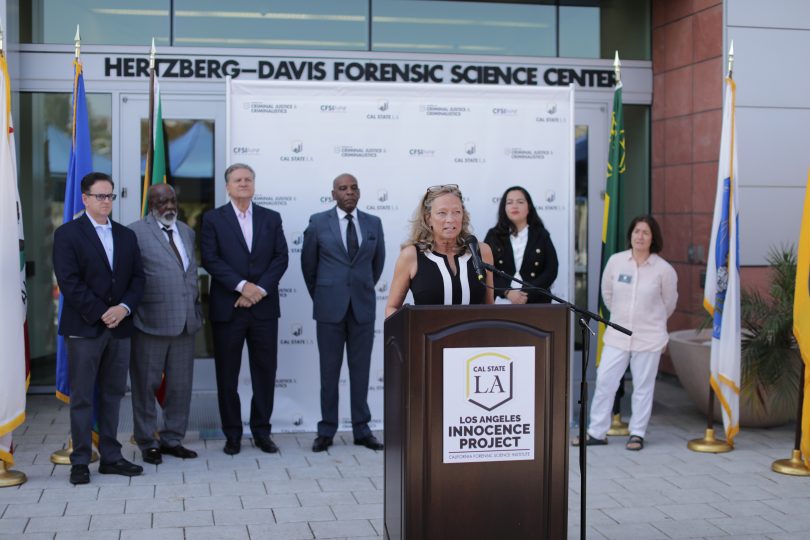 Andrew Wilson spent 32 years in prison for a crime he did not commit.

Now, with a founding donation of $1 million from Wilson, a team of post-conviction attorneys and wrongfully convicted individuals has launched the Los Angeles Innocence Project (LAIP) at Cal State LA.

The new program is unique in that it is the first in a network of more than 70 innocence projects to be partnering with an academic forensic science program — in this case, the California Forensic Science Institute and School of Criminal Justice and Criminalistics at Cal State LA.

“We know that faulty forensics are a leading contributing cause of wrongful convictions. That is why this project—this first-of-its kind collaboration—is so important and needed,” said Paula Mitchell, former legal director at Loyola Law School’s Project for the Innocent, who will lead the Los Angeles Innocence Project.

Barry Scheck, who co-founded the national Innocence Project in New York, said he hoped the partnership would serve as a model for the rest of the country. The collaboration, he said, “will not only impact our ability to uncover cases where faulty forensics were responsible for wrongly convicting people in the past, it will help improve our ability to accurately assess and scrutinize the reliability of forensic evidence used in courtrooms today.”

A 2016 report found that between 1989 and 2012, wrongful convictions cost California taxpayers at least $221 million. And a 2018 report found that exonerees nationwide had officially spent more than 20,000 years in prison for crimes they did not commit.

Before his own exoneration in 2017, founding donor Andrew Wilson, served over three decades in prison for the death of a man who was stabbed while sleeping in his truck with his girlfriend. Wilson was convicted after law enforcement reportedly both pressured and led witnesses to positively ID him as the assailant, while keeping critical exculpatory evidence from the defense, and thus from the jury. Wilson ultimately received a $14 million payout for his wrongful conviction.

“I was compensated for my wrongful conviction and incarceration, and I am proud to use that money to be the Los Angeles Innocence Project’s founding donor,” Wilson said. “The lawyers who helped me will work to free the many innocent prisoners in California’s prisons and prevent future wrongful convictions. No one should go through what I—and my family—went through.”

Carrillo was a sixteen-year-old high school student when he was arrested for the 1991 drive-by murder of Donald Sarpy. In 1992, after two trials, the first with a hung jury, Carrillo was convicted of the murder, along with multiple counts of attempted murder, for which he was given a life sentence, plus a second, consecutive sentence of 30-to-life.

While in prison, Carrillo studied law, and wrote to everyone he could think of to try to get someone to help with his case. When at first that failed, Carrillo filed his own habeas petition.

Fifteen years into his sentence, an attorney responded to his letters and decided to look into Carrillo’s case. Five years later, an LA judge vacated Carrillo’s sentence.

In 2001, Jane Dorotik was convicted of killing her husband based on faulty forensic evidence. She spent 19 years fighting to prove her innocence before she was released from prison in April 2020, at age 73, with the help of the Loyola Project for the Innocent. Just before her case was to be retried in May 2022, San Diego prosecutors filed a motion for dismissal.

“I hope I can contribute some of the wisdom I have gained from my wrongful conviction, which was based almost entirely on faulty forensics, so I can give back to this community that has given so much to me,” Dorotik said.