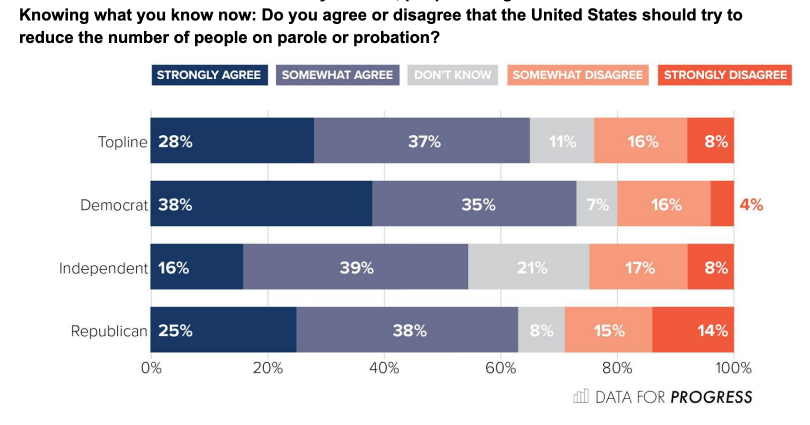 Approximately 4.4 million (or 1 out of every 58) adults were on probation or parole in the United States as of the Bureau of Justice Statistics’ last updated count, at the end of 2018. To give some perspective, the number of people under community supervision is nearly double that of the incarcerated population of 2.3 million people. And probation and parole feed people back into the jail and prison systems, greatly contributing to mass incarceration, instead than alleviating it.

Just under half (45 percent) of people sent to state prison were on probation or parole at the time of their arrest. The majority of those violations were not for new criminal offenses, either. Rather, 25 percent of all state prison admissions were for technical violations of supervision, including missing appointments with parole and probation officers and failing drug tests, and not being able to maintain a job.

Probation and parole, the justice leaders said, must be “substantially downsized, less punitive, and more hopeful, equitable and restorative.”

These conditions easily conflict with each other. Having to carve out time for frequent appointments and drug tests, for example, can make it hard to hold down a job. And failing to show up for one meeting, or being unable to make one fee payment (just a few of many possible technical violations), can send a person right into the prison system.

The current status quo perpetuates racial disparities in the justice system and does not serve public safety or communities, according to EXiT and the coalition of prosecutors and justice leaders. “Probation and parole should promote development and success rather than trying to find failure,” they wrote. “Our system should provide hope for the future, not a pathway to incarceration.”

The group called for probation and parole terms that are “generally no longer than 18 months.” Supervision should also allow for “good time” credits that reduce the term length for milestone achievements like job retention and high school completion. Technical violations and many low-level new offenses should not result in incarceration, either, according to the group. States and local governments must also eliminate supervision fees levied against individuals and their families. Additionally, savings from cutting back probation and parole should be reinvested in community-based programs and supports. And justice officials must “seek, hear, and honor the voices of community members, families, and justice-involved individuals as equal partners in system reform.”

It appears that there is public support for addressing the nation’s mass supervision problem, as well.

In a new national poll of 1,164 likely voters, a majority of respondents said there were too many people on probation and parole, as well as in prisons and jails, and that the U.S. should try to reduce these justice system-involved populations.

A majority of participants also said they believed that the primary function of probation and parole should not be to surveil and supervise, but to provide supports and services that help people meet their employment, housing, and other needs.

While use of probation varies widely across state lines, some states, California among them, are already working toward substantial reforms.

In September, CA Governor Gavin Newsom signed AB 1950, which limited probation terms in most cases to one year for misdemeanors (previously three years for most crimes) and two years for most felonies.

The new law is expected to save the state hundreds of millions of dollars, and help reduce recidivism by shortening the length of time that an individual “might be subject to arbitrary or technical” probation violations that send them back to lockup.

In an op-ed for USA Today, Miriam Krinsky, a former federal prosecutor and Executive Director of Fair and Just Prosecution, and Vincent Schiraldi, former Commissioner of the New York City Department of Probation, Co-director of the Colombia Justice Lab, and Co-Chair of EXiT, called for action during this “watershed moment,” amid protests and demands for a criminal legal system that will “better serve all members of our community.”

“Seizing that moment is going to require tackling and fundamentally transforming probation and parole systems that are fueling the very prisons and jails they were originally designed to decarcerate.”