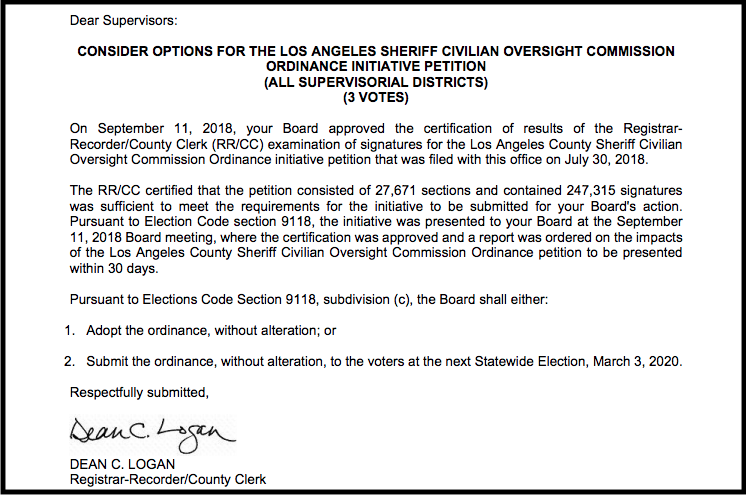 On Tuesday, the Los Angeles County Board of Supervisors unanimously voted to send a jail reform ballot initiative to the next presidential primary election, after deciding not to, instead, simply approve the measure as a local ordinance now, without voter input.

The ballot measure, brought by the Reform LA Jails campaign, would give the civilian commission overseeing the LA County Sheriff’s Department the power to subpoena documents. The initiative would also require the county to conduct a feasibility study exploring alternatives to the county’s plan to spend billions building new jail facilities, and diverting the savings to community programs to keep people out of jail.

Last month, on September 11, the County Clerk/Registrar-Recorder reported to the supes that the Reform LA Jails initiative had gathered enough signatures to qualify for the ballot.

(The initiative’s supporters put the number at over 247,000 signatures gathered while registering 9,248 new voters.)

The board had three options for responding to the initiative brought before them. They could either adopt the ballot measure as it was, put the measure before the voters in 2020, or order a report on the impact that the initiative would have on the Civilian Oversight Commission and the county.

The supervisors selected option 3, triggering a report back to the board. The County Counsel report raised several concerns, including questions about potential problems if the oversight commission tried to subpoena records regarding any current investigations, as well as concerns surrounding costs for the changes to the oversight commission.

Priscilla Ocen, the Civilian Oversight Commission’s vice-chair, stressed that her oversight panel needed subpoena power in order to hold the sheriff’s department accountable. “Subpoena power will enable us to require the Sheriff’s Department to divulge information,” Ocen said, voicing her support for the Reform LA Jails initiative. “It will allow us to call relevant staff and personnel to provide testimony on issues of concern to the Commission and to the community. It will allow the community to ask important questions and to demand answers so that we can respond and ensure that we have an equitable system of policing in L.A. County.”

The ACLU of Southern California’s Esther Lim called on the board to “remember where we were—a time when transparency and accountability of the sheriff’s department were not existent and violence was rampant inside the jails”—that led to the creation of the Civilian Oversight Commission. But now the commission members lack the power to do the work they’re tasked with, Lim said, urging the board to pass the initiative as an ordinance. Waiting “years after criminal investigations to conclude for information needed today to stem misconduct” does not promote “swift justice,” Lim said.

But the LA Times editorial board called the ballot initiative’s proposed changes “maddeningly modest,” especially in light of Governor Jerry Brown’s recent approval of SB 1421, a bill to crack open the state’s police privacy laws to require the public release of law enforcement personnel records when officers use force or have committed misconduct. This, the editorial board said, will cover much of what the commission, and activists, could have obtained with new subpoena power.

“The files that activists appear to want most — documenting deputy misconduct and discipline — are either beyond subpoena power because of privacy laws or already within reach, without subpoenas, because of a recent change to state law,” the Times editorial argues. “Witnesses could be ordered to appear before the commission, but it is not a court and would lack power to enforce its orders. Attempting to compel testimony could run afoul of the 4th and 5th Amendments of the U.S. Constitution.”

The coalition of justice reform activists might have “fetishized or mythologized subpoena power, investing it with greater potency than it actually has,” the editors added.

Addressing the board on Tuesday, Youth Justice Coalition’s Kim McGill argued that giving the commissioners subpoena power would bring the commission in line with the Los Angeles Police Commission and the body overseeing the Seattle Police Department, neither of which have “had their whole system crumble” because they were given the power to subpoena police department documents.

With regard to the initiative’s required study into jail alternatives, diverting vulnerable people from jail is already the purview of the LA County Office of Diversion and Reentry. The office, however, has come up against major challenges, including “a dearth of community-based service organizations that can care for the rising numbers of patients and that have expert personnel and funding to meet acceptable standards of service,” the LA Times editorial board wrote.

During the meeting, Supervisor Sheila Kuehl acknowledged that the Reform LA Jails campaign members had hoped that because they submitted so many signatures (more than 100,000 the number required to qualify for the ballot), the supes would make their initiative an ordinance. However, Kuehl said, she believed the initiative deserved to go before the county’s more than 10 million voters.

The supervisor agreed with the LA Times editorial board’s assessment that the initiative was a “modest proposal,” adding that “we would be adopting an ordinance to encourage ourselves to carry on the work and expand it in terms of what we thought we were doing in starting the Office of Diversion and Reentry.”

Kuehl, who was the only supervisor to speak on the issue, motioned to send the initiative to the 2020 ballot. The board voted unanimously in favor of Kuehl’s motion.

The LA County Board of Supervisors “continues to disappoint the people that voted for them,” said Reform LA Jails Coalition Chair Patrisse Cullors after the vote. “Elected officials don’t have all of the answers. They are supposed to amplify the voices of their constituents–but this Board continues to ignore the people most impacted by the Sheriff’s Department.”