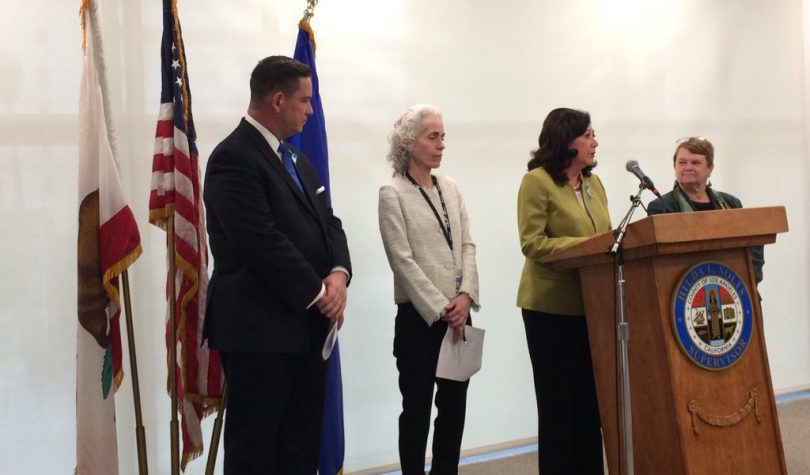 Teen girls in foster care in Los Angeles County are 2.5 times more likely to become pregnant by age 19 than their peers who are not in foster care, among whom teen pregnancy rates are at historically low levels. The county aims to address this pressing issue through a public-private partnership funded by the Conrad N. Hilton Foundation, Supervisor Hilda Solis announced this week.

“At a time when we’re seeing a significant decline in the rate of pregnancy among young people, our most vulnerable children – foster youth – are still at risk,” Supervisor Solis said.

The partnership, called the Los Angeles Reproductive Health Equity Project for Foster Youth (LA RHEP), is spearheaded by the LA County Department of Children & Family Services, the Alliance for Children’s Rights, Children’s Law Center of California, John Burton Advocates for Youth, the National Center for Youth
Law, Public Counsel, and Seattle Children’s Hospital, as well as a youth advisory board.

The project is also working toward state-level policy change and has launched a public awareness campaign regarding unplanned pregnancy among young people in the child welfare system.

On Tuesday, the board of supervisors approved a motion by Supes Solis and Sheila Kuehl to declare May “Teen Pregnancy Prevention Month,” and to direct DCFS, along with the county’s Departments of Health, Public Health, and Mental Health, to collaborate with LA RHEP and to conduct outreach throughout May using the materials, training, and education developed by the partnership.

The issue of unplanned teen pregnancies among foster youth affects teen parents and their children, and urgently needs to be addressed, according to the supervisors.

In LA County, kids with teen mothers involved with the child welfare system experienced a rate of abuse and neglect, themselves, two to three times higher than kids born to teen moms with no DCFS-involvement, according to a 2013 report funded by the Hilton Foundation.

In 2017, the state adopted “California’s Plan for the Prevention of Unintended Pregnancies for Youth and Non-Minor Dependents”—also known as “The Plan.” In response, the Hilton Foundation allocated funding to create LA RHEP to intervene and combat the negative outcomes connected with unplanned pregnancies among the county’s vulnerable foster teens.

In February 2017, Solis and Kuehl authored a motion that directed DCFS to report back to the board regarding implementation of the Plan.

“Last year, I authored a motion to align the County’s teen pregnancy prevention goals with the LA Reproductive Health Equity Project for Foster Youth to help empower foster youth to make healthy decisions through meaningful conversation and education with trusted adults, and through access to high quality and appropriate care,” Solis said.