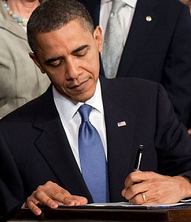 For inauguration day, we’ve gathered some worthwhile stories about outgoing President Barack Obama’s criminal justice legacy, as well as some letters from prominent conservatives to President-elect Donald Trump and the new administration regarding the future of criminal justice reform.

The president’s clemency initiative started in April 2014. Since then, the Office of the Pardon Attorney has processed more than 16,000 petitions for clemency.

“In late August, we made a promise: that the Department of Justice would review and make a recommendation to President Obama on every commutation petition from a drug offender then in our possession,” Deputy Attorney General Sally Q. Yates said Thursday. “I’m proud to say we kept that promise.”

Obama issued a total of 1,715 commutations, a number higher than any president since at least 1900. Donald Trump does not appear likely to follow in Obama’s footsteps with regard to clemency.

The president has faced criticism in the past for granting fewer pardons (which wipe a person’s criminal record and restore their rights) than many of his predecessors, despite receiving more than 3,000 petitions during his eight years in office. This week, however, Obama pardoned 64 more federal offenders, bringing his total number to 212—higher than both George H.W. and George W. Bush, but still lower than every other president since 1900.

The Drug Policy Alliance has a non-exhaustive list of Obama’s accomplishments and efforts—including those that “fell short”—to reduce mass incarceration and end the war on drugs.

It’s still not entirely clear how the Trump, who has pledged to be “tough-on-crime,” will handle many specific criminal justice reform issues that have seen bipartisan support over the last few years. (Read WLA’s related post-election story, here.)

The ACLU—which on November 9, vowed to “see him in court” if Trump tried to fulfill any unconstitutional campaign promises—has already taken its first legal action against Trump, filing Freedom of Information Act requests “concerning Trump’s conflicts of interest.”

In part one of the series, Pat Nolan, Director of the Criminal Justice Reform Project at the American Conservative Union Foundation, stresses the importance of individually tailored consequences via “alternative courts”—like drug courts and veterans’ courts—and re-entry programs, rather than handing out “one-size-fits-all” sentences and warehousing “people we are merely mad at.”

For those who are unfamiliar, Nolan is a former California Republican Assemblymember who, after being busted in a federal racketeering sting, had a very personal wake up call about the state of the nation’s criminal justice system.

In part two of the series, Vikrant P. Reddy, a senior research fellow at the Charles Koch Institute, calls on the incoming president to reduce over-criminalization. “There are now over 5,000 obscure federal crimes, such as shipping lobster in plastic rather than cardboard boxes, that are more appropriately treated as administrative or regulatory matters,” Reddy writes.

Reddy also makes the case for performance-based funding in the criminal justice system. Prison programs and the prisons themselves should receive funding based on outcomes, Reddy says.

The heroin epidemic—both the supply and demand side—should also be one of Trump’s top criminal justice priorities, according to Reddy. “This means redirecting scarce resources from incarceration to less costly and more effective diversion programs that treat addiction.”

In part three of the Marshall Project series, Marc Levin, the policy director of Right on Crime, urges Trump to listen to his Vice President, Mike Pence, and the other key conservatives who have publicly, verbally supported reforming the justice system. Levin also tells Trump to look to New York’s “broken windows” policing method as “the single most powerful urban example of simultaneously reducing crime and incarceration.”