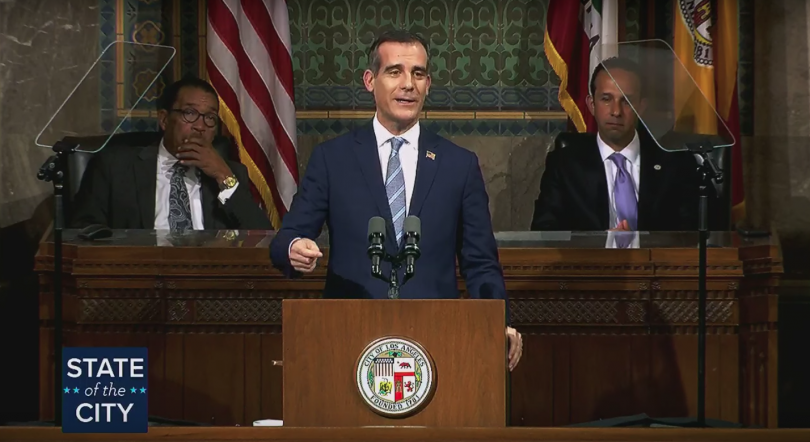 At City Hall on Tuesday, after returning from a visit to Iowa, a key early presidential primary state, LA Mayor Eric Garcetti delivered his fifth annual State of the City address. Garcetti talked extensively about public safety issues, while focusing most of his hour-long speech, not surprisingly, on the city’s homelessness crisis.

“Homelessness isn’t an issue,” Garcetti said, “homelessness is the issue”—an issue for which the mayor has been criticized by advocates who believe he has not made good on his promises to end chronic homelessness in the city.

The number of homeless people in Los Angeles County skyrocketed 23% in 2017 over 2016, according to the LA Homeless Services Authority, outpacing city and county efforts to increase housing and shelter space.

The mayor announced that Los Angeles will spend $430 million during fiscal year 2018-2019—more than double the amount spent during the current fiscal year—to address what he called “the greatest moral and humanitarian crisis of our time.” Some of that money will go toward a new temporary shelter program called “A Bridge Home.”

The mayor said the city will allocate approximately $20 million in general fund dollars to build a temporary 100-bed shelter in each of the City Council’s 15 districts.

While Proposition HHH will put $1.2 billion into supportive housing over the next decade, Garcetti said the city must act now by quickly opening more emergency shelters, because “homeless Angelenos can’t wait years to get off the streets.”

The city, Garcetti said, needs “more options for bringing them inside now.

To that end, the mayor’s plan will eliminate some of the city’s “red tape and regulations that slow down construction,” so that new shelters can open this year.

Once a district builds a temporary shelter, then it will receive additional Los Angeles Police and LA Sanitation resources to move homeless individuals off the streets and into the shelter, and to clean the newly vacated spaces.

Garcetti praised soon-to-retire LAPD Chief Charlie Beck for his 40 years in law enforcement, and for leading a department the mayor called the “north star” for police agencies across the globe.

“I am so proud of [Chief Beck’s] work, and the work of the men and women of this department who have built deeper trust between officers and the communities they serve, and have turned the tide on rising crime,” Garcetti said.

“Last year, after two years of increases, crime was flat,” Garcetti said. In 2018, crime is continuing its larger downward trend.

According to Garcetti, homicides, auto thefts, burglaries from cars, and overall property crime has dropped considerably compared to the numbers this time last year. Using year-to-date numbers allowed Garcetti to paint a rosier picture of crime in Los Angeles, according to KPCC’s Frank Stoltze, who noted that the mayor did not include robberies, which have risen for the past few years, in his address.

The mayor said that after “we heard last year from Angelenos who wanted a stronger police presence in their neighborhoods,” the city “added nearly a half-million additional patrol hours to our streets—the most ever.”

The LAPD’s South Bureau experienced the all-time lowest number of homicides and shootings since its inception in 1973, Garcetti said. He attributed the numbers to a two-year-old Community Safety Operations Center in South LA. C-SOC is “a command post where specially-trained and equipped officers can pool their information to pinpoint their actions,” Garcetti said. “For instance, if a gang-related shooting occurs on a particular block, C-SOC allows us to anticipate where a retaliation might occur, deploy resources proactively—from police officers to gang intervention workers—and to get them on-the-ground immediately.”

The mayor says the city plans to expand these strategies. “We’re authorizing another half-million hours of expanded patrol,” Garcetti continued. And “we’re taking the C-SOC model and adding it to the Valley, the Westside, and Central Los Angeles, so every community can benefit from the success of the South Bureau.”

The city also expanded the use of Domestic Abuse Response Teams “to help survivors break away from the cycle of violence,” and doubled the LAPD’s elite Metropolitan Division, “to bring additional officers to neighborhoods experiencing crime spikes.”

It’s worth noting, however, that the LAPD has struggled to strike a balance between under and over-policing South LA over the past few years. The strong presence of the Metro officers—and the frequent stops they make—has caused resentment among some community members who say they feel racially profiled by the Metro cops, and would rather see an increase LAPD foot patrols focused on building better relationships between residents and officers.

The mayor reiterated in his address that the city and the LAPD are committed to community policing.

The city expanded its Community Safety Partnership to Harvard Park, “a South LA neighborhood where residents had been living with violence for too long,” Garcetti said. “CSP puts officers on a 5-year assignment in one place, so they can get to know the names of the people they serve and vice-versa,” and “so they can build trust in the community, and work closely with residents to make LA safer.”

Since CSP’s move into Harvard park, “there has not been a single homicide in the neighborhood.”

The city and police department have worked over the past year to increase transparency and accountability, as well.

The LAPD, Garcetti said, is largest police agency to equip officers with body cameras. The mayor touted the department’s new policy to release video footage of officer-involved shootings and other critical incidents, such as in-custody deaths, within 45 days.

Additionally, the city has mandated training for officers in implicit bias and de-escalation.

The mayor also pointed to the city’s rehabilitation and reentry efforts, including the city’s New Roads to Second Chances program, through which 350 formerly incarcerated individuals have gotten Caltrans jobs. The program’s recidivism rate, Garcetti said proudly, is 1.4 percent—a far cry from the state’s “expensive” and “dangerous” average recidivism rate of 66 percent.

Touching briefly on the issue of immigration, Garcetti praised the new LA Justice Fund, a $10 million collaboration between LA County, the city of LA, and philanthropic partners, to provide legal representation to immigrants facing deportation.

Special Order 40 is a 1979 mandate that prevents police from questioning people with the sole intention of determining their immigration status. The mandate was implemented by then-LAPD Chief Daryl Gates along with city officials, so that undocumented immigrants could feel safe reporting crimes and otherwise engaging with law enforcement without the fear of deportation. Under the mandate, LAPD officers are not to arrest or book anyone solely for violating immigration law.

“Immigrants make our city stronger,” Garcetti said. “And when they know that police officers are there to protect them, not to ask them where they’re from, we are all safer.”