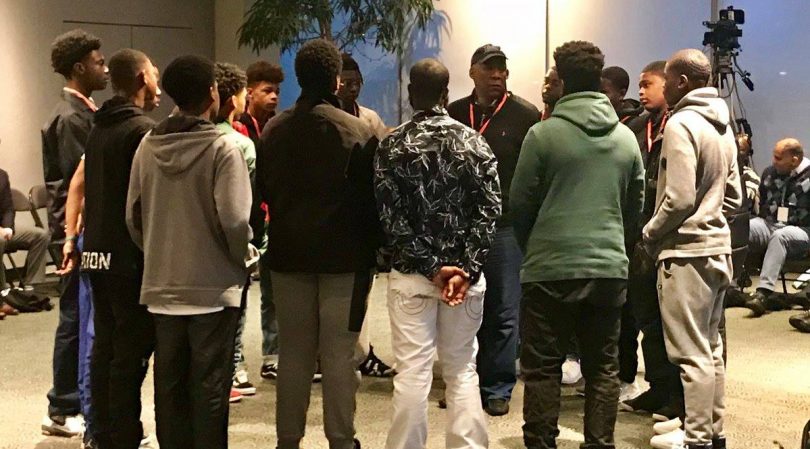 On Thursday, the Obama Foundation announced the winners of the My Brother’s Keeper Challenge Competition, naming 19 community organizations across the nation that will receive money and support for expanding and launching programs to reduce violence, and to establish clear paths to opportunity for young men and boys of color.

The winners will split a pot of more than $5 million in grant dollars, and will receive technical assistance and project evaluation from the MBK Alliance.

Ten of the 19 challenge winners were selected to be “National Impact Communities.” These organizations will receive between $100,000 and $500,000 over the course of two years to expand their youth mentoring or violence reduction services. The Impact Communities will also receive two years of assistance and evaluation, and fund-matching of between $50,000 to $75,000 each of the two years to hire MBK Alliance Community Coordinators.

Liberty Hill will use the money to launch the Unlock Justice Initiative, through which young people will be empowered to organize against the criminalization of youth. The project will also work to boost youth diversion in Los Angeles. The initiative will partner with the California Community Foundation and their BLOOM program, the LA County Department of Mental Health, and the Center for Strategic Public-Private Partnerships.

The Sierra Health Foundation will boost three existing programs that focus on violence prevention, intervention, and mentoring in Sacramento communities of color.

The Urban Strategies Council will expand programs offered by the Mentoring Center for the benefit of local Oakland-Alameda Alliance for Boys and Men of Color and Oakland’s new Department of Violence Prevention. A group of young men of color will be selected to participate in the Mentoring Center’s Transformative Mentoring program, after which, the men will advise the Dept. of Violence Prevention, mentor middle school youth, and create a violence-prevention-focused community service project.

Two out of nine smaller “National Seed” grants were awarded to RYSE in Richmond, CA and the Youth Leadership Institute – Fresno Boys and Men of Color.

These programs, along with seven others across the nation, will receive $50,000 grants to go toward violence prevention strategies or mentoring for boys and young men of color in their communities. The seed grants will come with assistance from the MBK coalition aimed at developing a long-term plan and infrastructure to sustain future work.

The RYSE Center works to prevent violence and harm while lifting up youth of color as community leaders. RYSE, according to the MBK Alliance, “has been able to cultivate a pipeline where boys and young men of color in Richmond feel emotional and physical safety, a positive sense of belonging, and are able to gain new skills and build relationships with peers and adults.”

The Youth Leadership Institute will use the money to boost the impact of the Fresno Boys and Men of Color, which serves as a platform for youth-led advocacy and provides boys and men between the ages of 14 and 26 with mentoring and job skills development.

“When Barack Obama spoke the words, ‘We are the change we seek,’ no one heard them clearer than the young leaders of color standing up for a new vision of youth justice in Los Angeles County,” said Shane Goldsmith, president and CEO of the Liberty Hill Foundation, and co-chair of the CFBMoC’s Southern California Regional Action Committee. “This project will help replace a system that treats young men of color as threats with a youth development system that recognizes them as assets to their communities.”

The Obama Foundation also announced that in February 2019, the MBK Alliance will also host its first-ever national convening of community orgs, youth of color, and elected officials at a national summit, MBK Rising! The Oakland, CA event will coincide with the fifth anniversary of the launch of former President Barack Obama’s My Brother’s Keeper initiative.

The foundation is also summitting much sooner, however, on November 18 and 19, in Chicago. (Livestream the event: here.) The convening will feature community leaders and activists “from diverse backgrounds and with different points of view–to advance the conversation about what community leadership in action means today.”

The summit will also engage attendees in the development of the Obama Presidential Center and Museum, the final agreement for which the Chicago City Council approved in late October.

“We’re hosting the Summit in our backyard, Chicago, the place the Obamas’ story began and the future home of the Obama Presidential Center and Museum,” said Obama Foundation CEO David Simas. “This Summit is a step toward building a global network of changemakers and the first time that the participants in all of our programs—from our Fellows to our Community Leadership Corps—come together to share their experiences, learn from each other, and start a dialogue on their common desire to change their communities for the better.”

Image by My Brother’s Keeper Alliance.