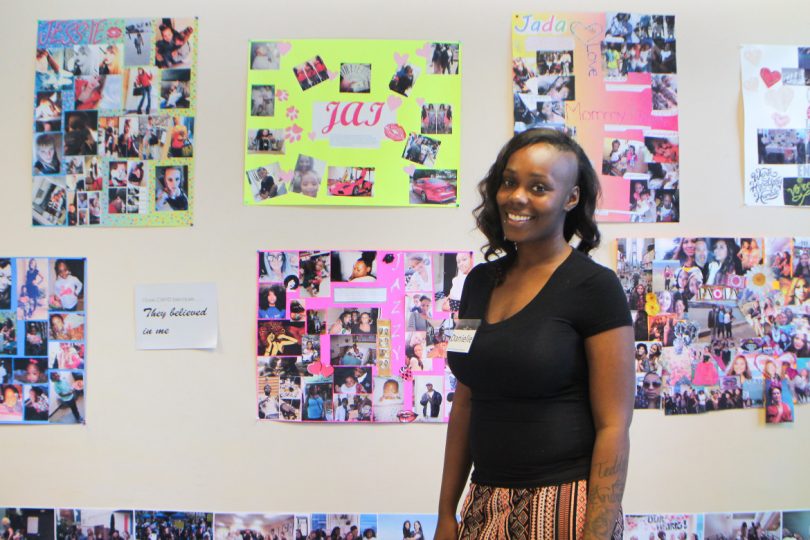 Danielle Lynette Robinson, 23, has been in the Sisters Rising program since 2013.

EDITOR’S NOTE: San Francisco, Los Angeles and San Diego metropolitan areas are all rated as among of the highest intensity centers for child commercial sex trafficking in the nation.

Fortunately, California has been a leader in reforming its response to the commercial sexual exploitation of children, treating the young people involved as the victims of crime they are, not lawbreakers to be prosecuted.

Yet, for victims of sex trafficking, recovery can be extremely challenging due to the severity of the emotional and physical abuse, as well as the sexual abuse, they have endured. Fortunately, as California reformed its legal response to sex trafficking victims, community organizations have been emerging to help these young women and men to whom great harm has been done to begin the healing process and then to find ways to thrive.

In the story below, which originally appeared in the Juvenile Justice Information Exchange, journalist Sarah Zahedi explores the work of one such program.

How a unique mentorship program started by survivors of sexual exploitation gives sexually trafficked girls a safe and loving place to redefine their lives.

Through times of trauma and distress, often all a child needs is to be showered with love. It may sound corny, but for the estimated 100,000 children who are sexually exploited per year around the country, it can be transformative.

“Some of them will even just come in to the drop-in center for a hug. They’ve said that to us,” said executive director Falilah Bilal at MISSSEY.

In Oakland, MISSSEY’s efforts are more than necessary. The San Francisco Bay Area is one of the top three epicenters of human trafficking in the United States along with Los Angeles and San Diego, with 46 percent of all prosecuted human trafficking cases in California coming from the Alameda District Attorney’s office.

MISSSEY partners with Girls Inc. and the Mentoring Center to match people who wish to volunteer their time to provide advice and emotional support to sexually exploited young women in need.

“The goal of the program is to provide a restorative healthy adult relationship to youth who have experienced disruption and betrayal in adult relationships,” said mentoring and training coordinator Liz Longfellow.

To become a mentor, applicants must attend an information session, fill out an application, be interviewed, participate in a rigorous 20-hour training program and go through a criminal background check. From there, the match process can take a while, depending on what youth want from a mentor. MISSSEY works to have several mentors on hand so there is an individual mentor who meets the youth’s specific requests as soon as the youth requests a mentor.

Some of the mentors are already connected to the field, therapists or social workers or nurses who have worked with sexually exploited youth in the past. Other mentors are simply people who want to help. The minimum duration of the mentor-mentee relationship is one year.

“It’s a commitment to become a mentor,” Longfellow said. “The process of getting matched with a mentee takes so long because the mentor has to show they will give their time and commitment. If the relationships doesn’t last a year, it’s not going to be as effective for the youth.”

The sense of love and care the young girls can get from a mentor has proven to bring about monumental positive change, especially since many of the relationships last beyond one year, she said.

“The year is a great benchmark but it’s great when it continues on,” Longfellow said. “We’ve had some of the youth come back and say [their mentors] are stuck with them for life. That’s a successful relationship.”

Take Sheila (all clients’ and mentors’ names have been changed), now 18. After being exploited for many years in Oakland, she realized that in order to get out of the life, she needed to move away from the city. She wanted to be far enough away to feel safe, yet be able to visit family and friends every now and again. Her child welfare worker in Alameda County helped her find supported housing in the Antioch/Bay Point area. But when Sheila got there, she felt very alone and disoriented. She didn’t know how to use the bus system to get to the store, let alone to look for a job.

Longfellow matched her with a mentor named Ena who is also a survivor of commercial sexual exploitation. Ena, who has lived in Antioch for many years, was able to show Sheila around. With Ena’s support, Sheila eventually was able to find a job. Ena also helped her decorate her new apartment, which in part involved creating a vision board to give Sheila a daily visual reminder of her dreams and goals. Ena, who was a college student then, knew about many area resources to make school more affordable. She referred Sheila to several people in her support network so that she could feel more encouraged to take college classes and feel more connected to her new community. After many conversations about Sheila’s traumatic history, Ena convinced Sheila to reconnect with a therapist.

“I wouldn’t have been able to make it here without Ena,” Sheila said. “She has helped me so much and I feel really comfortable talking with her and telling her personal stuff about myself. That doesn’t really happen for me. It’s a relief.”

From 2007 to 2014, MISSSEY has served approximately 1,000 girls. And the organization’s services do not stop at the mentorship program. It also offers case management for youth looking to get out of the life of sex trafficking and a foster youth program, funded by Alameda County Social Services to prevent and intervene in child sex work.

“Because we are survivor-led and survivor-informed, young people know that there are staff with these experiences,” Longfellow said. “So there is a less of bridge that needs to be crossed to reach the youth and they know there is an understanding on our end, which is profound for young people.”

The young women who request mentors through MISSSEY are usually first in the case management or foster youth program, like 18-year-old Mia. While doing a sentence in juvenile hall she was connected to a mentor named Linda.

While Mia served her sentence, she wrote to Linda. When Mia was released and sent to a group home placement in Sacramento, Linda drove to Sacramento from the Bay Area on weekends to spend the day with Mia, taking her away from the often hectic environment of a group home.

Telling her story to Linda, Mia felt open and comfortable enough to talk about her experiences. Even when Mia eventually moved back to Oakland, Linda never lost touch with her. She was eventually able to get permission from Girls Inc. to invite Mia to her home and introduce her to her own children.

“This is the most peaceful place I have ever been. I feel safe here,” Mia said during her visit.

Today, Mia has come to rely on Linda for support when times get difficult and for encouragement in moving toward her goals. They celebrate birthdays and holidays together. Linda knows that one of the main things she does for Mia is simply show up, consistently. No matter what is going on with Mia, Linda maintains their relationship and unconditional positive regard for Mia.

“The idea is that it’s the responsibility of the mentor to do the reaching out and build up a relationship with at least a couple hours a week of available time for the mentee,” Longfellow said. “They have to schedule with the young person and there has to be regular contact so it can register as a sense of support” for the youth.

An essential part of this system of support, according to Longfellow and Bilal, is continuing to support the youth as they struggle with leaving a life of sexual exploitation.

“It’s common in the first year that we work with someone that they are in and out [of the life],” Longfellow said. “They want help and we find them to provide it but then their exploiter often finds them again and maybe they’re back in for a while and then they get back out.”

“We are strictly here for them. Even if you’re in the life we will still work for you, be with you, support you,” Bilal said.

Roughly 89 percent of the young women who MISSSEY serves are black women. While most of the youth are referred to MISSSEY through the foster care system or the juvenile justice system, young girls are also able to drop in at the center to receive services.

Bilal stressed there is more MISSSEY wants to do if and when it can get the funding. Child exploiters can make up to $150,000 to $200,000 per child each year. Bilal frustratedly noted that MISSSEY and several other similar nonprofits suffer from a lack of financial resources in comparison.

“We need more funding, need independent donors to stand for us, people to put their money where their mouth is in terms of this issue,” Bilal said. “It’s discouraging that we don’t have more for young people in these circumstances.”

In the meantime, Bilal and Longfellow said they are thrilled by the positive change they have witnessed thus far for the young women and encourage other members of the community to volunteer.

“We are rooted in this idea that the young women are not their experience. They are bigger and brighter than their experience,” Bilal said. “We see them and accept them for where they’re at and we move them from that place and they feel it so they stay connected to us. It’s pretty awesome.”
“It’s amazing when you see someone feels heard and seen and comforted and not judged,” Longfellow said. “Those are huge gifts to give to a younger person in need. And we get to witness the journey of how strong and resilient these young women are in their healing process.”