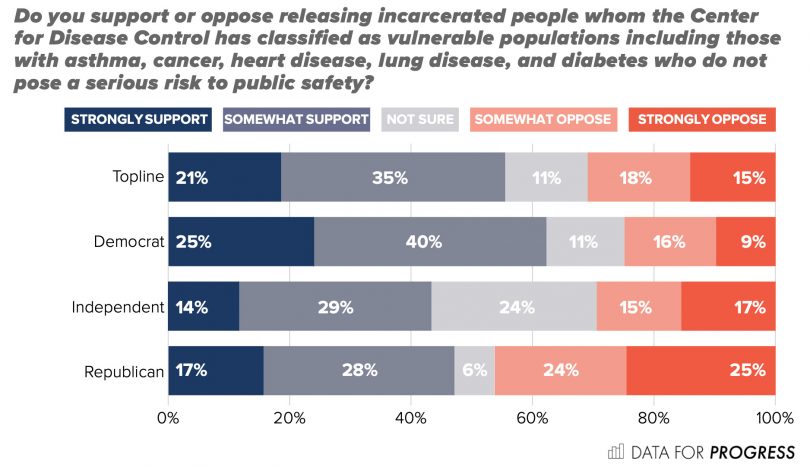 As of April 11, the California Department of Corrections reported that the CDCR’s COVID-19 stats jumped again, with 55 incarcerated persons who have tested positive for the virus, and 77 CDCR staff members who had also tested positive, for a total of 132 affected. (The employees self-report and have not updated their totals since April 11, which means the total may be higher.)

The most concerning numbers came out of the California Institute for Men (CIM), located in Chino, CA., where 38 inmates and 21 staff members have been diagnosed, for a total of 49 in the prison who have tested positive, up from 41 the day before.

With these steadily rising numbers in mind, the progressive think tank, Data for Progress, and nonprofit Justice Collaborative have released a new report that shows the majority of California voters support the release of certain categories of people from the state’s jails and prisons in response to the coronavirus threat.

“Across the country and throughout the world, there has been wide recognition that reducing
the number of people inside jails and prisons is critical to slowing the spread of the coronavirus— both within these facilities and in the general public,” wrote the report’s authors Lara Bazelon, who is a law professor and the director of the Criminal Justice & Racial Justice Clinics at University of San Francisco School of Law, and Kyle C. Barry, the Senior Legal Counsel for The Justice Collaborative.

“At stake is the health not only of incarcerated people,” they wrote, but also of “the correctional staff whose job requires interacting with them daily and in unavoidably close quarters. They are part of the critical workforce on the frontlines against COVID-19, putting their safety and the safety of their families on the line every day to do their jobs.”

For the past few weeks, WitnessLA has been tracking the very real risk to correctional staff members, a risk that was again demonstrated when the number of COVID-19-infected CDCR staff jumped on Thursday.

In California, the issue is particularly urgent due to a prison system that was, for a long time, egregiously overcrowded. Things got so bad that, in 2009, a three-judge federal panel found that the overcrowding amounted to a violation of the Eighth Amendment of the Consitution, a decision the U.S. Supreme Court upheld in a very sternly-worded ruling in 2011, in Brown v. Plata.

In the last two weeks, the number of confirmed cases among prison staff and incarcerated people has jumped from two people who were infected, to 81 infected, and now to 105.

(The numbers for today, Friday, have yet to be posted.)

Governor Gavin Newsom, who has provided decisive leadership on many COVID-19 issues, has largely failed to act to release any meaningful amount of the vulnerable people who pose no threat to public safety.

At the same time, in Los Angeles County, LA County Sheriff Alex Villanueva, with the help of other county officials, has been far more proactive in his actions to lower the LA jail population.

Here’s what they found:

Overall, the polling showed that voters were concerned about the problem of COVID-19 entering the state’s prisons, with some bipartisan agreement:

58 percent of Californians, including a majority of Republicans, support releasing anyone charged with an offense that does not involve a serious physical safety risk to the community.

56 percent support releasing people who have medical conditions that place them at higher risk, including those with asthma, cancer, heart disease, lung disease, and diabetes.

A majority (55%) support releasing individuals who have fewer than 12 months remaining on their sentences—a number 22 percentage points higher than those who oppose (33%).

(See the rest of the charts in the full report.)

(Note: The sample was reportedly weighted to be representative of likely voters by age, gender, education, race, and voting history, with a margin of error is ± 4.1 percent.)

“We are asking Governor Newsom to act now,” author Lara Bazelon said, “because this is a matter of life and death.”

Bazelon’s statement has been echoed by a broad array of others, including the federal three-judge panel, which has now been engaged in oversight of the state’s prisons for more than 10 years.

As readers may remember, last week WLA reported that that same federal panel of three judges denied an emergency motion to release certain vulnerable incarcerated people, explaining that the judges didn’t have the authority to make that decision.

Yet, the trio of judges also made a point of sending a message to those who do have the power to act, including Governor Newsom.

In their statement, the judges said that current health risks are “heightened in the most vulnerable groups among us,” including those who are incarcerated — adding that there is an “undisputed risk of further contagion in a carceral environment.”

While the judges said they could not themselves order the release, they made clear that Newsom and state officials could, as they “have broad authority to voluntarily take steps that may prevent the life-threatening spread of COVID-19 within their prisons,” according to the judges.

“We urge them to leave no stone unturned.”

According to the new report, a majority of California voters agree.

Of course, those working or residing in the nation’s various county jails are also at high risk, as we’ve seen in the spiking numbers of people diagnosed with COVID-19 in the New York City jail system, where more than 700 inmates and officers at Rikers Island Jail alone have tested positive for COVID-19, and at least nine corrections officers and staff members have died of the disease. (The first inmate to die in the NYC jails, 53-year-old, Michael Tyson was locked up for a technical violation of his parole.)

Those members of law enforcement on patrol during the crisis are also risking their safety when they go to work.

In Los Angeles, the numbers of law enforcement who have tested positive are still comparatively low, but in danger of climbing.

As of Friday, April 10, 29 members of the Los Angeles Sheriff’s Department have tested positive for COVID-19, and 376 staff members are quarantined.

The good news is that 223of those who were affected are well and back to work.

In the LA County jails, as of Friday according to LA County Health’s Dr. Barbara Ferrar, there are 53 confirmed cases coming from the jails, 45 of whom were staff, and eight are inmates.

On Friday, a total of 18 inmates were in isolation, the majority due to the fact that they were displaying symptoms of COVID-19. Plus, 440 inmates were listed as quarantined (up from 308 on Thursday), which means that they came in close contact with someone who is being monitored.

(By the way, these designations aren’t up to the LASD. Only Correctional Health Services — CHS –and/or the Department of Public Health — DPH –have the authority to designate an inmate for isolation or quarantine.

As of April 7, 36 LAPD officers and 11 civilians staff members have contracted the virus.

As we wrote last week in our California Justice Report, two Riverside deputies have now died of the coronavirus.

Terrell Young, one of a growing number of Riverside department members who contracted the coronavirus, died on Thursday, April 2. Young, a father of four, became seriously ill with COVID-19 symptoms after transferring a sick inmate from Cois Byrd Detention Center to the hospital.

Back in Los Angeles, on April 8, the LA Times reported that a member of the nursing staff in LA’s jails who died the previous week had tested positive for COVID-19.

Of course, the kids and staff in the county’s juvenile halls and youth camp are also at risk.

More on that shortly.

In the meantime, stay safe everybody.