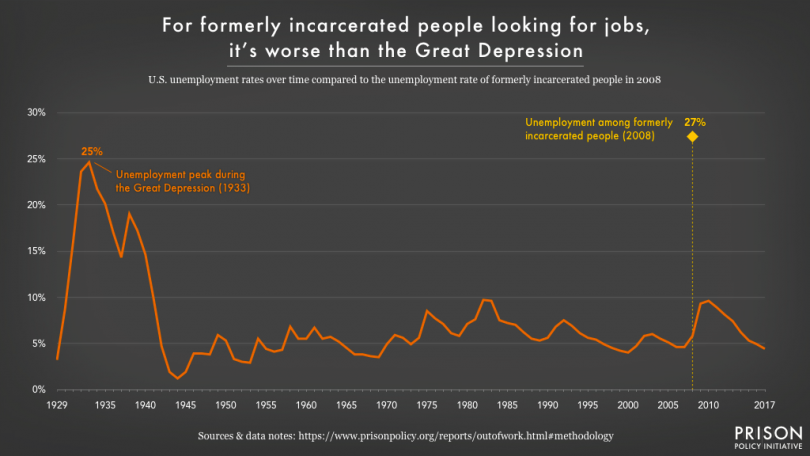 Approximately 27 percent of formerly incarcerated people are looking for a job, but are still unemployed, a rate higher even than the general U.S. unemployment rate of 24.9 percent during the Great Depression, according to a new study by the Prison Policy Initiative.

“Unemployment among this population is a matter of public will, policy, and practice, not differences in aspirations,” according to PPI.

“Although we have long known that labor market outcomes for people who have been to prison are poor,” says PPI, “these results point to extensive economic exclusion that would certainly be the cause of great public concern if they were mirrored in the general population.”

Every year, more than 600,000 people are released from prison, and face the formidable tasks associated with re-entering their communities, including finding work.

Research shows that employment reduces the likelihood that a person will be rearrested and returned to lockup.

There are thousands of legal “collateral consequences” attached to felony convictions that restrict things like voting rights, job prospects, and eligibility for government assistance, and more.

Beyond the legal collateral consequences, people with convictions on their records face stigma and discrimination.

One Northwestern University study revealed that a criminal record reduced the likelihood that a job seeker would receive a callback from a potential employer.

Not Surprisingly, Race and Gender Play a Role Moreover, formerly incarcerated black women are the group most often working low-security, low-paying, and occasional jobs, while white men are most likely to have full-time jobs.

The Time Since Release From Prison Factor

“The transition from prison back to the community is fraught with challenges; the search for employment is one of many tasks that can derail successful reentry,” PPI says. “In the period immediately following release, formerly incarcerated people are likely to struggle to find housing and attain addiction and mental health support. They also face disproportionately high rates of death due to drug overdose, cardiovascular disease, homicide, and suicide within this crucial period. Taken together, these results make it easy to understand how various barriers to reentry operate as an interconnected system to increase inequality.”