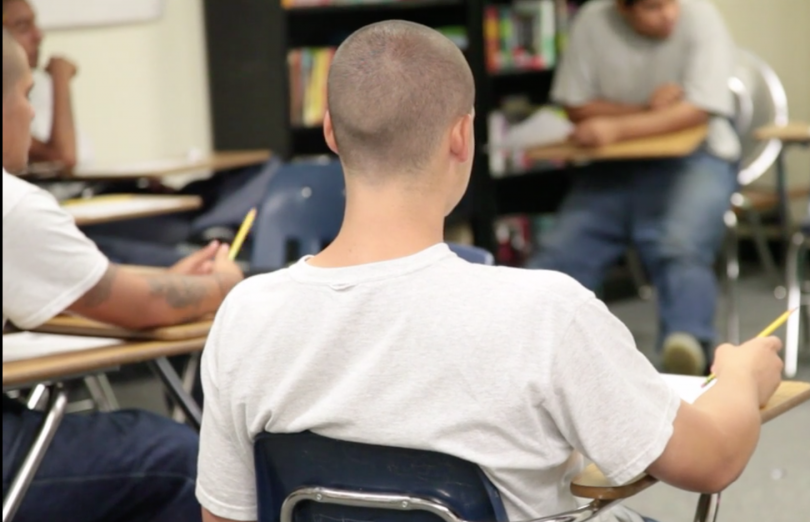 Kids in LA County’s Youth Probation Camps Are Proud of Their Diplomas
So, how do we help them build on their success?
Not very well, says a new report

The Los Angeles County Office of Education boasts that scores of young people who were at risk of dropping out of high school get their high school diplomas or their GED credentials while they’re in LA County’s juvenile probation camps each year. It’s a monumental and pivotal moment for students who often have fallen behind in school and so might not expect such an accomplishment.

But what follows may be a letdown for the students who are so proud of their achievements.

According to a recent audit, once they have graduated, many are confined to their rooms with little to do during class time. So instead of being rewarded for what they have accomplished, the youth are effectively penalized by suddenly having far fewer programming options than the non-graduates. This news comes as there are more high school graduates in LA’s juvenile probation facilities due to legislation that allows some students to gain their diplomas with fewer credits, according to the county’s probation department.

Eight percent of the youth interviewed had graduated from high school, according to the audit’s authors. “From their reports it seems clear that the youth do not have many programs or activities during the day. One youth at Camp McNair spoke about how youth who graduated ‘don’t really do much but either sit inside, watch TV, play the game, or outside playing basketball.’ While some take college classes or help with the landscaping, that only takes up part of the day, sometimes only a couple of days a week. One youth at Camp Onizuka spends part of his days on extended phone calls. One youth at Camp Scudder said that she graduated but they have to keep her in class so she sits on the computers playing elementary level games on the PBS website.”

The audit, conducted to examine youth experiences in LA County’s probation camps and juvenile halls, was issued by the Violence Intervention Program (VIP) at the request of the Los Angeles County Board of Supervisors. VIP, which runs one of the nation’s largest child abuse treatment programs, interviewed 104 youth at 12 probation camps anonymously. The kids interviewed represented 20 percent of the total camp population of 520 as of February 2016.

Youth working toward their diplomas have a relatively standard school day, according to the report. Kids told the report’s authors that they wake up around 6 or 6:30 a.m., have breakfast and then “attend school for two periods, where a period is a block of two classes.” Lunch follows and then the students attend a final period of the school day. Their afternoons vary between recreation and program time before they eat dinner. Some youth might have programs after dinner while others might go inside for recreation before heading to bed.

For graduates, however, those morning and afternoon blocks of classes vanish — often with little or nothing to replace them.

Something Productive To Do Between activities at camp (photo courtesy of Supervisor Mark Ridley-Thomas)

Many of the students who graduated were those who particularly benefited from programing. Denise Miranda, a former teacher and principal in the county’s juvenile halls, said the students she taught were some of the most excited and engaged she has ever worked with as an educator.

“You have this population that you would think has very little motivation,” she said, “but they were just very hungry and very eager to learn.”
The structure of the school day is very similar to that of a normal Los Angeles high school, Miranda said.

“I think for the kids, it’s something for them to do,” said Jimmy Wu, who was incarcerated as a youth, and now is the alumni advocacy director for InsideOut Writers, which teaches creative writing to youth in the county’s juvenile facilities and after their release. “I wouldn’t say ‘look forward to,’ but it helps break up their time. Breaks up the monotony. They know that ‘OK, between these hours I’m not going to be confined in my room … or engaging in just recreational activities. I’ll actually be given an opportunity to learn something.”

“Some of the youth commented that [classes] had the effect of making the days go by faster,” wrote John Naimo, LA County auditor-controller, in a response to the ViP report.

One common finding from the survey’s interviews was the observation that structure is key to passing time, and staying out of trouble. Some of the youth said weekends appeared longer than school days because of their lack of programming. Programs, they said, helped to keep them busy, and keeping busy was important.

Twenty-four percent of the kids interviewed wanted more educational opportunities throughout camp, before and after graduation. These ranged from preparation classes for the SAT to college courses to graphic design classes. While some of these classes are available at some of the camps, they are not given at all the camps, the report said. And certain camps had little or nothing for the graduates.

The Need for ‘Next Steps’ Interestingly, the majority (46 percent) of those surveyed planned to go to college — either a two-year or a four-year school — after receiving their diplomas or GEDs. Another 18 percent wanted to go to trade school.

According to the report’s authors, the youth they surveyed enjoyed college courses when they were offered, “especially high school graduates who otherwise have little to do during the day.” Yet few college classes were actually available in the camps. More than 120 students in the county’s juvenile residential facilities are currently enrolled in these classes, but the courses are only offered at the Dorothy Kirby Center location and for the five camps at the Challenger Memorial Youth Center.

When asked to suggest how they would personally recommend improving the camps, 13 percent of the youth said they wanted more programs for kids in general, especially for those who graduate. Of those who made programming suggestions, 11 asked for more art opportunities and five asked for music classes.

“I think that with vocations in particular,” he said, “a lot of the young people may not necessarily be interested in [additional] studying in a classroom setting, just going through textbooks or workbooks. If you were to provide some type of hands-on training for them to really be able to learn how to go after something that they’re passionate about,” or a skill that might lead them to work when they got out, “that may be much more beneficial.”

“Again, most of these kids are just doing their best to earn regular high school credits,” said Wu, because most of the kids who wind up in the camps have fallen so far behind.
“I received my high school diploma while I was in juvenile hall so I remember how I thought it was a really monumental day,” he said. Getting a diploma was also “extremely bittersweet,” because, despite his achievement, Wu said he and kids like him know their “futures are still in limbo.” A lot of kids in the county’s camps “don’t even know if we were going to be able to come home,” when their time comes for their release.

As a consequence, he said, the importance of a young person seeing they “actually did achieve something” when in the camps or the halls was enormous.
The problem, it seems, is what comes afterward.

Graduates, Miranda said, were a “population that we were a little concerned with.”
During Miranda’s time in the halls, she worked on transition plans for students preparing to leave detention and return to their regular high schools. But some students would graduate school and still have months until their release.
“So we were saying, ‘What are we going to do? What is the transition program going to look like for them?” she said.

One of the biggest barriers for these students, according to Miranda, is that many programs outside the classroom were built for students who were “disengaged” or “dropouts.” These programs, she said, weren’t necessarily prepared to work with engaged students who had simply earned all their credits.

Because of the recent passage of AB 216, which allows youth who have been in multiple school placements to use the state minimum requirements of 130 credits to graduate, Probation has seen an increase in graduation rates within the department — meaning an increase in unoccupied kids, unless large changes are made.

In a 25-page response to the VIP report’s findings, Probation officials noted that the department was beginning conversations with the Los Angeles County Office of Education to halt implementation of AB 216 until a youth leaves camp. “This allows youth to forgo [their eligibility for a quicker graduation via] AB 216, in order to continue their high school experience and [to] receive classes that would help [them] prepare themselves for secondary education and vocational programs upon release,” probation officials stated.

Probation officials also said, in their response to the report, that the department is working to create more programming for its graduates due to the survey’s findings. This includes implementing more college-level courses.

According to Miranda, it’s an area the department is actively seeking to expand. She added that one school also has a pilot program that aims to prepare students who have graduated to enter the workforce.

In a recent email response to questions about LA County Probations’ plan to help graduates, the department also described a list of programs they said are now available. A number of courses, wrote a probation spokesperson, are the result of a collaboration with Operation READ, a literacy initiative that provides tutoring to youth who are “two or more grades below grade level in reading, writing and comprehension,” according to information on the Education Coordinating Council’s website. One program probation says is offered is a book club, which works in collaboration with the Los Angeles Public Library. Probation also reportedly offers work programs that can allow youth to earn a paycheck and work experience. Other programs listed include: Personal Enrichment Training, in which youth “work in small groups with Operation READ staff to explore careers, obtain life skills, and gain an understanding of work ethics and financial literacy,” and Achieve 3000, an online tool that delivers daily instruction for nonfiction reading and writing tailored for each individual.

Probation also reported voter registration assistance and career path assistance.
Yet, according to a probation source who requested not to be named, although some camps, like the five facilities in what is known as Challenger Memorial Youth Center, have college courses, if a new graduate happens to reside in another camp, he or she still may have no such post-graduation programs available.

Miranda thinks the most important focus should be on adding more programs to focus on mental health issues.

“There’s a lot more that I think we know now in regards to trauma,” she said. “I think you can’t just say, ‘OK, we’re going to work on algebra today.’ I think we now understand that there are layers and there’re a lot of social/emotional issues that our students are dealing with, which I think you need to address before you get to the academics.”

This story is part of a series by reporters from the USC Annenberg School of Communication and Journalism. The series is the product of a collaboration between WitnessLA and the Juvenile Justice Information Exchange.